Akira Kurosawa’s 1954 classic Seven Samurai is a cinematic masterpiece in every sense of the word. When director John Sturges decided to rework the Samurai tale into a 1960 western named The Magnificent Seven, he didn’t quite reach the same lofty artistic heights as his progenitor, but his robust reimagining was still a fantastic vehicle for its star studded cast and managed to tap a cultural vein that saw it spawning a franchise of its own. Three sequels, a long running TV series and one seriously iconic theme song later, and the Magnificent Seven had found itself a permanent fixture in the pop culture lexicon.

Which brings us to director Antoine Fuqua’s new rapid fire remake, which will more than likely not attain any of its predecessors’ lasting accolades, thanks to its prioritization of body count over character development. But that doesn’t mean it still can’t be a thrilling ride in the saddle.

Much like Sturges did, Fuqua assembles a huge gallery of talented actors to fill out his titular number. Denzel Washington leads the pack as Sam Chisholm, a taciturn bounty hunter with unerringly deadly aim and a troubled past who gets approached by Emma Cullen (Hayley Bennett) to help her save her town of Rose Creek. The recently widowed Emma explains that their tiny, hard-won mining town is being overrun by dastardly industrialist Bartholomew Brogue (Peter Sarsgaard) and his small army of mercenaries, who have left a pile of local bodies in their wake.

Offering everything they have as payment, Emma convinces Chisholm to take on this apparent suicide mission, prompting the bounty hunter to assemble/half-stumble upon six other men brave/crazy/desperate enough to help prepare the townspeople for when Brogue intends to return to their homesteads in two weeks time to claim it all for himself. Joining Chisholm is hard drinking gambler John Farraday (Chris Pratt), PTSD-suffering sharpshooter Goodnight Robicheaux (Ethan Hawke), Robichaux’s knife wielding best friend Billy Rocks (Byung-hun Lee), spiritual (but also very violent) mountain man Jack Horn (Vincent D’Onofrio), dirty outlaw Vasquez (Manuel Garcia-Rulfo) who only takes the job to keep the bounty off his head, and young Commanche brave Red Harvest (Martin Sensmeier) out to make a name for himself.

That’s a top drawer cast, and they certainly deliver, oozing charisma out of every dusty pore, despite the fact that for the most part they’re not so much fully fleshed out characters but rather walking, talking gimmicks with names. This doesn’t stop the cast from all turning in very likable performances though, with Pratt and Garcia-Rulfo breaking the tension with some much needed levity with consummate ease. Sarsgaard also gets to have a killer of a time (emphasis on the “killer” part) as the mustache twirling bad guy. He’s all dead eyes and chilling drawl as he chews scenery with a villainous delight. Washington and Hawke – who previously teamed up with Fuqua on his breakout hit Training Day – are the only two that get given some tangible narrative depth though, but even these developments are threadbare efforts.

And the reason for this lack of character work is Fuqua’s decision to have the movie mimic the nightmarish gatling gun that shows up in a pivotal third act scene to deadly effect: Its rapid fire just mercilessly pounds along, chopping down any person or obstacle in its way to get to its target – in this case the film’s massive finale shootout. This accelerated action rush feels more akin to a modern day action movie than a traditional western, the latter genre known for it’s deliberate and ponderous pacing.

Narrative subtext is pretty much non-existent as the screenplay by Nic Pizzolatto (of True Detective fame) and Richard Wenk is more concerned about blowing up this iconic time period than saying something about it and its inhabitants. Even cinematographer Mauro Fiore often eschews the sweeping widescreen vistas and flora-lingering that western’s are known for. It’s mostly in-your-face filmmaking, that should appeal to modern audiences, but any genre traditionalists may be left wanting.

All in all, Fuqua’s efforts will most definitely satisfy the adrenalyzing needs of any action movie junkie. If you’re happy with watching hordes of faceless thugs being dispatched with superheroic precise shooting by some cool looking/sounding heroes – who require little to no emotional investment, but can quip about as fast as they can draw their guns – in the most detonative badass ways possible, then step right up. Trust me you won’t be disappointed. But if you’re looking for a magnificent return to the traditional western genre of old that birthed this franchise, you would best look elsewhere.

Ian & Barley’s quest to spend one more day with their dad beginneth March 6 in theatres. W… 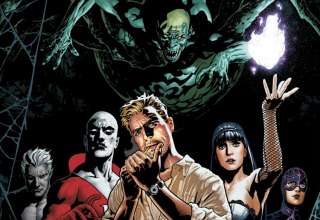 Warner Bros and DC are trusting J Abrams to finally bring their big dark team up together for potential movies and TV series.