The Enemy Territory franchise began when it was released as a free multiplayer add-on for their new true three dimensional version of Castle Wolfenstein on the PC a few years back.

I remember the first time I gave it a go, more specifically because I had just gotten ADSL and I wanted to try something online for the first time. The experience was fantastic, the gameplay worked well and required a lot of teamwork and strategy. It just worked and was a fresh departure from the ever aging Counter Strike.

ET:QW was released over a year ago for PC as a full retail title and the response from the gaming world wasn’t fantastic, although it had its merits and has now been ported over to the Xbox 360 and Playstation 3 so that console owners could also get a taste of the online action via Xbox Live or PSN.

The story is pretty much what you might expect, the Strogg have invaded Earth and it is up to you to either help the humans defends and protect our precious planet, or alternatively, join the Strogg forces to decimate all the burger eating parasites that inhabit the planet. The game does have a campaign mode, although it is merely a succession of maps filled with bots and doesn’t really differ from the quickplay modes at all.

Both teams play pretty similarly, with a few differences in tools and vehicles but keeping it fairly similar to maintain the balance in the game. You have a choice of different classes, such as a solder, medic, engineer etc. What I did like is that each class gives you a few options in the weapon department so that you aren’t for instance, stuck only using a shotgun if you use an engineer as well as the fact that certain classes are required to perform certain objectives, ensuring that you learn to be efficient with each one. 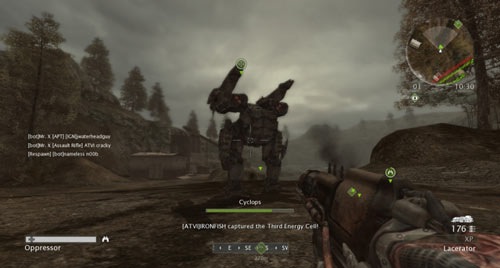 When it comes to the gameplay, you will feel right at home with the layout if you have played any of the Battlefield games touting big maps, vehicles and points of interest. A significant difference though and something which I found to be a refreshing change is that the battles don’t just revolve around taking and holding points. Instead, each level has multiple objectives spread out over multiple areas.

You may begin the map with the first objective being to hack a computer in an underground complex. Once hacked, the computer would do something like open gates to a new area where you may have to steal a keycard and upload its contents by reaching a satellite tower on the other side of the map. Your opposition will then obviously have the task of defending all the crucial points. This map layout ensures that things remain interesting. One minute you are underground battling it out in close quarters and the next minute you are topside again riding shotgun in a tank storming a base.

As far as multiplayer is concerned, I attempted to find a game over Xbox live quite a few times over a few days but never managed to get into one. Philip, who has been playing the Playstation 3 version tells me that he found games over PSN without too much issue. However I would recommend that this game be hosted locally to ensure that lag doesn’t become an issue as international games rarely run smoothly, no matter what game you are playing.

On the plus side, this game has the inclusion of bots. I still believe that bots aren’t given enough credit, they definitely have their place in the world and I wish they were included in more games, especially when it’s late at night and you just can’t find enough people to fill the empty spaces in your lobby.

If you are a 360 or PS3 owner that has not been blessed with the magic of the internet, then you will be pleased to know that the games bots and quickplay modes allow you to quickly and easily jump into a “full” game whenever you want. The bots aren’t perfect but they are decent enough to give you a taste of what it is like to play in a loaded online game. 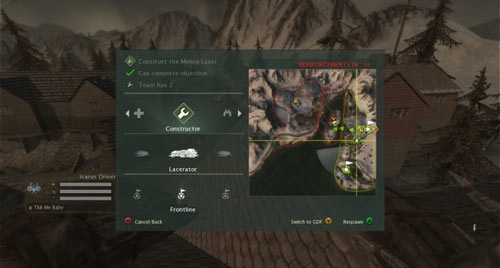 A topic that I do want to tackle is the Quake element. This game doesn’t really feel like a Quake game to be honest. There are a few weapons out of Quake and a couple of visual clues here and there, but If no one had told me that it was a Quake game I wouldn’t have realised, even with all the Strogg running amok.

The major problem with the Quake element is the weapons, not how they work or feel, but just that I was led to believe that this was a Quake game, with Quake weapons. In the original Enemy Territories you played in a World War 2 setting, using military weapons and tools. It all made sense and was a lot of fun. But this is Quake and Quake is about decimating anything in your path. So I was slightly disappointed the first time I nailed off a rocket at someone, only to find myself reloading it for the next couple of seconds. “That’s not a Quake rocket launcher?”, I thought. A Quake rocket launcher would have let me pour out a storm of rockets into a few enemies faces before having to reload or running out of ammo. I has a similar experience with a few other weapons.

With the graphics, weapons and art style bearing a huge resemblance to its competitors, I began to think that the game was merely branded with the Quake logo to help boost sales. Ironically, this is one of the few thing that really bugs me about the game. Had it been not been based on the Quake universe I would have felt more comfortable with the surroundings and the game as a whole would have just made more sense.

On the whole, Quake Wars has a pretty solid feel to it and the different objectives and locations do keep it interesting. If however you are looking to play it online, I would highly recommend finding a couple of people to play it with as this game was designed for online play and will not be of much use to you unless you are looking for a decent game to play with bots whenever you are offline.

Even though this game has a pretty decent feel to it, it hits me that with games like Battlefield: Bad Company and Unreal Tournament 3 on the way, this game is facing some very tough competition and I am not sure that it will be able to hold its own when these powerful franchises hit the shelves.

Scoring:
Gameplay: 7.5/10 [ A fairly Solid shooter with decent controls and map objectives] Presentation: 6/10 [A dull interface, average graphics and poor art direction do nothing to differentiate this from any other game in the genre] Sound: 6.5/10 [ Your standard bangs and booms ] Value: 7/10 [ If you find some good multiplayer games, you could be playing it for a while, botmatch adds to the fun especially for offline console owners] Overall (Not an average): 7.5/10 [ A decent “battlefield clone” with a few twists of it’s own ] Similar to: [ Battlefield 2142, Frontlines: Fuel of War ] Worse than: [ Call of Duty 4, I know it’s a slightly different genre but a game is game ]

Space tourism may feel like a distant dream for many. But for a few fortunate and very wea…

Space tourism may feel like a distant dream for many. But for a few fortunate and very wealthy individuals, it could be coming as early as late next year.