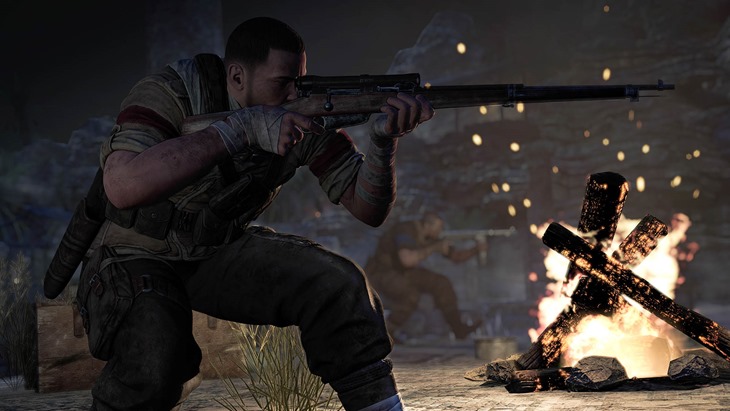 Sniper Elite 3 has always been the poster child for gratuitous violence. Blood and gore in gaming isn’t a foreign concept, but the amount of care, thought and detail that the Sniper Elite franchise has poured into creating realistic violence has been staggering to say the least. This approach however, has always been to the detriment of the rest of the game. With Sniper Elite 3 however, we finally have a game that feels complete.

Sailing out of war-torn Europe and into the hot deserts of North Africa, Karl Fairburne is sent behind enemy lines once again to harass the Nazis and disrupt their supply lines. There’s a story here, but it’s thinner than used toilet paper, while Fairburne himself once again has the personality of a dead puppy as he grunts his way through the various campaigns. Fortunately, this barebones tone gives the game a patrio-tastic sensation straight out of an old Battle Picture library comic, as American stereotype A guns for Nazi stereotype B with the assistance of British Cor Blimey let’s stick it to Jerry Mate Stereotype C. 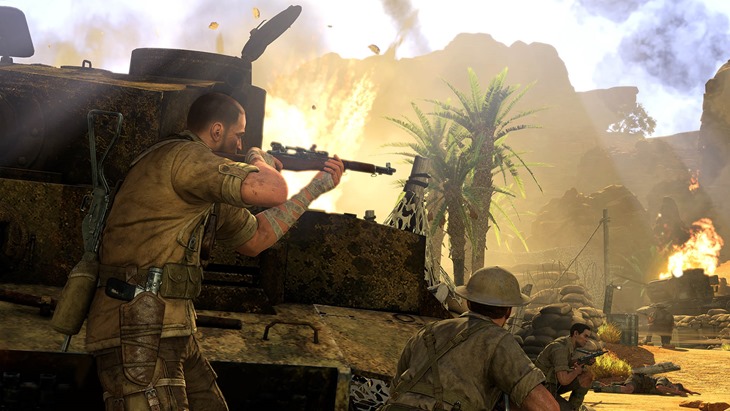 The biggest change in Sniper Elite 3, is that the game is now a fully-fledged tactical World War 2 game. In Sniper Elite V2, players were primarily using Berlin and its high-rise building to sneak from Sniper nest A to Sniper Nest B, with all other combat and stealth exploration relegated to a mere afterthought.

With Fairburne now working his way through Africa, that change in terrain has brought in a change in the rules of engagement. From tall buildings to the sands of Tobruk and the African savannah, Sniper Elite 3 has a much stronger emphasis on keeping a low profile and making your enemies wonder if Caspar the Unfriendly ghost is the reason why head trauma explosions have risen tenfold in the last hour. 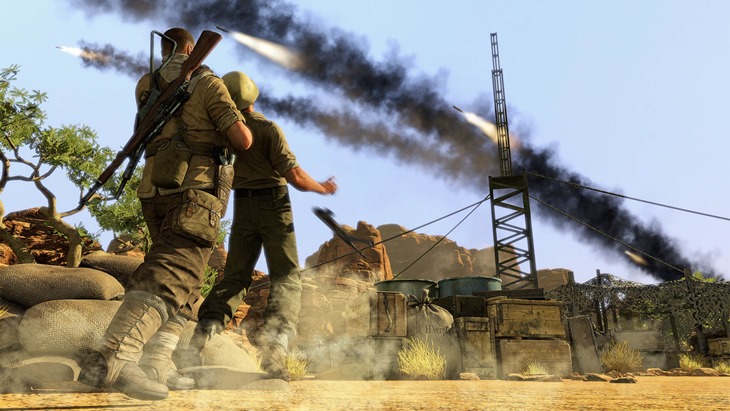 Players now need to work on a new system, that tasks them with picking off soldiers and relocating to a safe zone lest an entire platoon of Nazis descends on their last known position. It’s the same idea from Sniper Elite V2 and Ubisoft’s Splinter Cell: Conviction, with your uncovered location being represented by a silhouette, but this time the gameplay component feels far more relative to the action around you.

And it’s a good system. Shoot, sneak and relocate. Sniper Elite 3 now finally feels like a well-rounded game, that offers players more than one weapon in their arsenal with which to use to take down the third Reich. Players can sneak up close and pronounce a soldier husband and knife, use a silenced pistol that is only deadly when aimed at a Nazi helmet or even try their hand at a more action-packed approach. For once, an MP40 or a Sten machine gun doesn’t feel like a glorified pepper canister, but a deadly weapon instead. 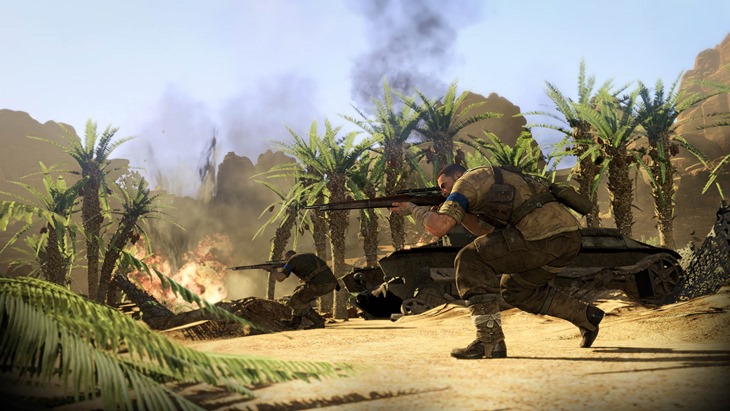 Players can now also tag enemies and battlefield assets with the use of binoculars, and keep track of targets as they walk around the stages. It’s a handy new feature, and it adds plenty to the concept of planning your attack, especially when combined with returning traps such as land mines, trip mines and distractions such as a thrown rock or some tinder that is left to burn.

Weapons now also get some more of the spotlight, with loadouts available between missions. You’ve got your standard sniper rifle, with three more that can be unlocked throughout the game. That rifle can also be customised with new parts, from scopes through to stocks and triggers that impact on the way it sways, muzzle velocity and damage done to fragile Germans and Italians. 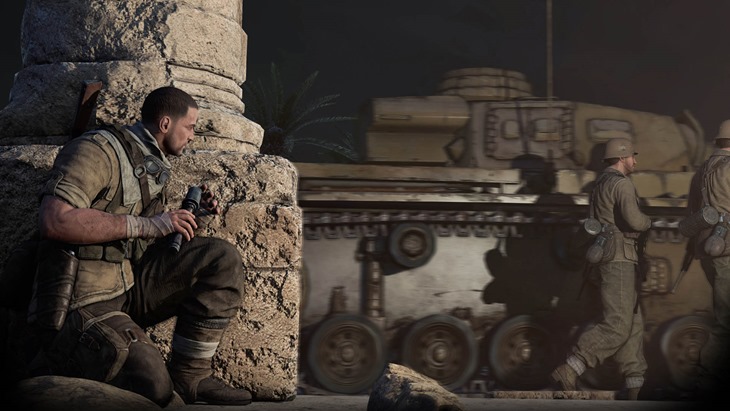 But as solid as Sniper Elite 3 feels in the gameplay and concept department, it’s let down by some shoddy design as well that makes the game feel incomplete. 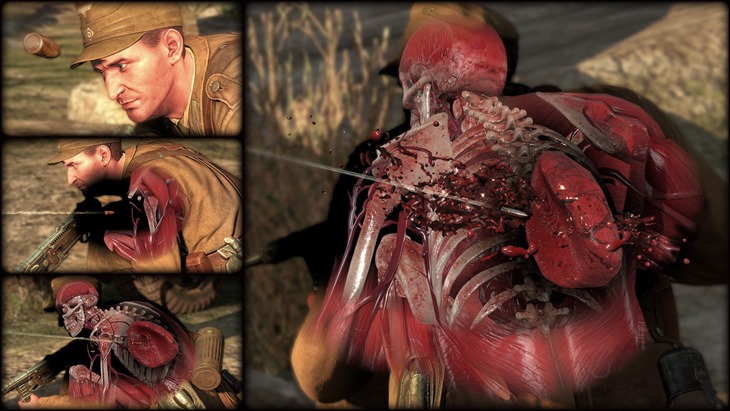 There’s also a massive inconsistency with the visuals of the game. While characters aren’t exactly boasting maximum new-gen graphics, the bulk of the game horsepower has been saved for a smoother frame-rate, impressive draw distances, realistic lighting and the massively violent X-Ray money-shots. But even after a 500mb patch (More on PC and Xbox), there are still glitches. Bodies can flap around for no reason, Fairburne will hold his gun in the wrong direction while magically using telekinesis to propel a bullet and the sound will quite often dip to B-grade Kung Fu movie level as it completely misses its cue to sync up with the violence onscreen. 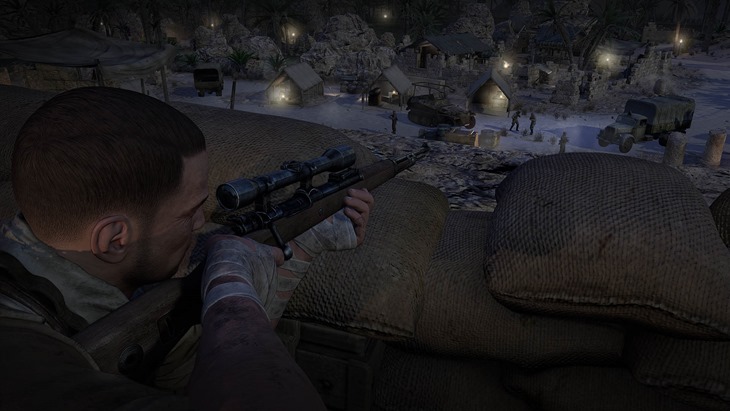 None of these visual glitches are game-breakers however, but they are annoying and make what should be a better sequel feel like an exercise in rushed to market design philosophies. It doesn’t help either that the AI is completely inconsistent as well, with the Nazi soldiers being oblivious to your movements, yet remaining ridiculously dogged to hunt you down should they discover you from across a map. The last time an enemy was this determined to do me in, it was way back in Resident Evil 3 when Nemesis was chasing me down. 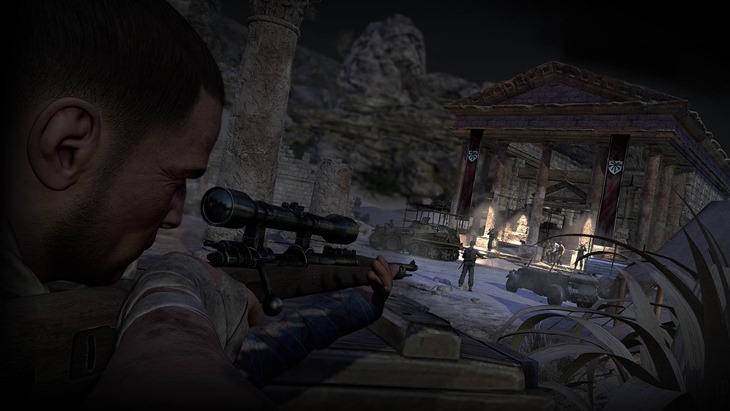 What was touted as an improvement in enemy intelligence, feels no different in the threequel as the soldier you’re tasked with eliminating rely on the tried and tested system of alert from other stealth games, poking their heads up like a desert rat until the all clear sounds and completely ignoring the dozens of dead bodies around them. Gotta love those scripted routines! But if you manage to get them aware of your presence and on the attack, beware. The Nazi soldiers are determined to make you an actual desert ghost, and will pursue you to hell and back as they cross the entire map to find you. It’s an inconsistent system at the best of times, and even on the higher difficulty settings can easily be taken advantage of.

Besides the usual Nazis, you’ll often find yourself having to take out an armoured car or Panzer tank along the way. These steel behemoths need to worn down, by shooting out the protective plates that cover their fuel tanks and then firing a round into that combustible holder of petroleum. Or you can lay a land mine, cripple a vehicle and sneak up on it, 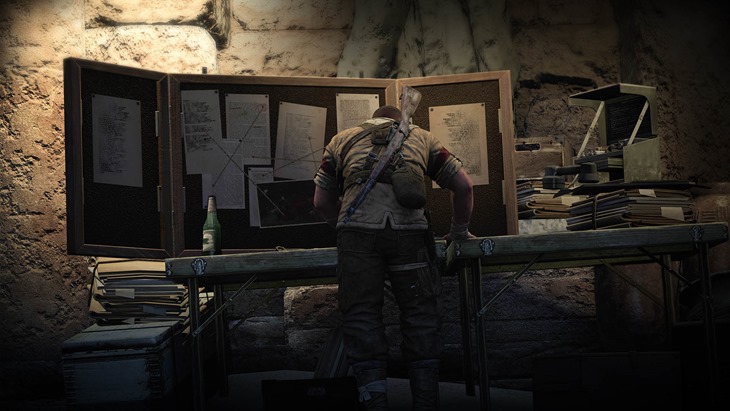 And yet despite all these irritating bugs, Sniper Elite 3 is still a viciously enjoyable game. It’s a far better game than its predecessor, and the fact that you no longer sound like you have a Keith Moon drum solo banging away underneath your feet when you attempt to be stealthy has opened up the game tremendously. The new mini-map manages to work perfectly as an aid and not a crutch for gameplay, while the visuals are at last passable, if nothing to write home about.

It’s a decently lengthy game, with each of the eight missions lasting at least an hour as you shift through objectives, uncover sniper nests, find collectibles and use the environment to your advantage. There are also challenges to engage in, while multiplayer includes Deathmatch and Team Deathmatch with maps that are suited to long distance kills. Distance King is a personal favourite, as the game awards wins to whoever manages to kill from the furthest distance as quality replaces quantity. 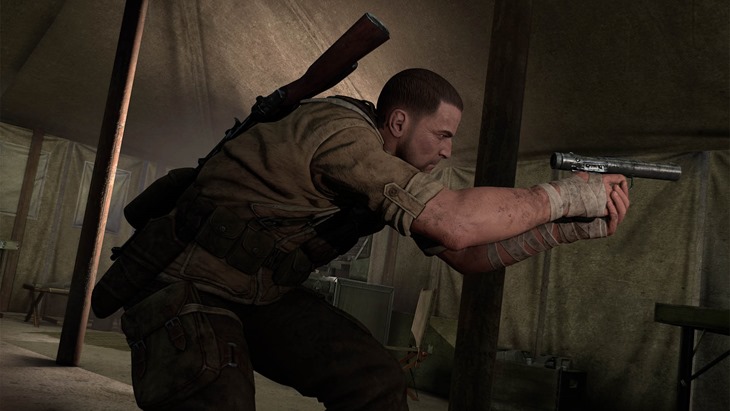 There’s also a co-op mode by the name of Overwatch, which allows one player to spot target for the other and works well over the larger maps. It’s just a pity that there are only two such maps available, resulting in a tight-fisted experience.