Home Entertainment Solo: A Star Wars Story review – I have a good feeling about this 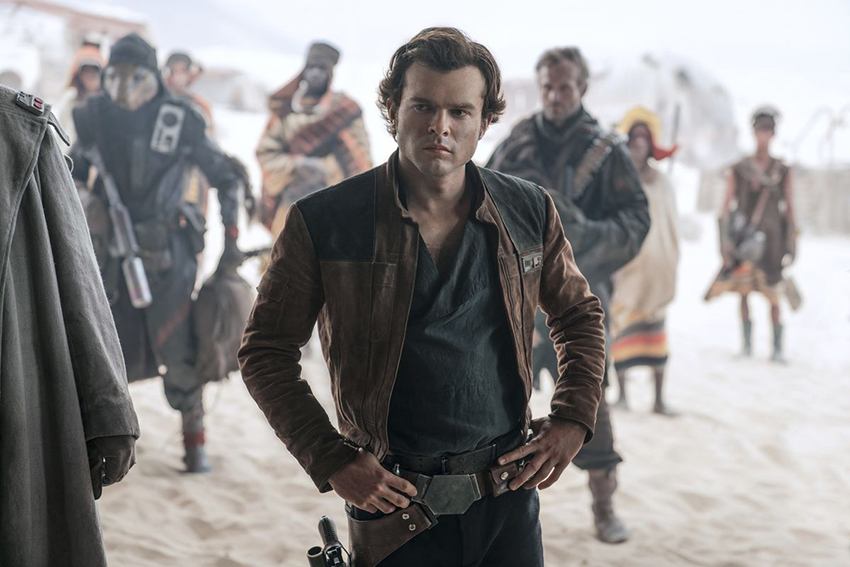 It was late Apple boss Steve Jobs who famously said that “people don’t know what they want until you show it to them,” but it would seem that a different modern-day megacorporation has really taken that mantra to heart. In Rogue One: A Star Wars Story, the new Disney-owned Lucasfilm detailed a mission we already knew the ending to decades ago, and we loved it. Now in Solo: A Star Wars Story, we get to dive into an origin story nobody asked for… and somehow it’s good as well.

If main saga entry Star Wars: The Force Awakens was criticised for being too familiar and Star Wars: The Last Jedi too bold, then spinoff prequel Solo straddles the divide. It does lean slightly more towards the safer familiar end of things though, as it is very fluent and comfortable in the traditional language of Star Wars. On a pure filmmaking level though, it is a film punctuated by some unexpected flourishes. These may not be anywhere near as gutsy as what Rian Johnson did on Last Jedi, but a staticky title treatment here or a snippet of composer John Powell’s swashbuckling music motifs there lend Solo a swagger that is undeniably its own. 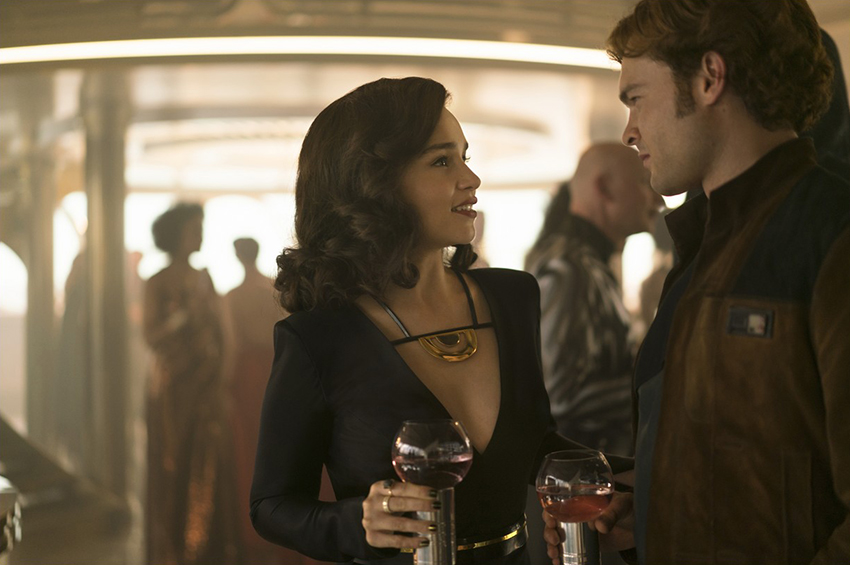 Speaking of claiming ownership on a swagger, as the name implies, Solo: A Star Wars Story dips into the background of a young Han Solo, one of cinema’s most iconic and beloved heroes. Stepping into the worn leather boots famously first worn by Harrison Ford is a daunting task, one which falls to lead Alden Ehrenreich. Before we ever got our first look at the movie, rumours abounded that the 28-year old actor had been reportedly struggling to hit the mark with his take on this classic. None of those purported struggles are evident in the final product though. Ehrenreich hits moments of uncanny resemblance in gesture and tone – nailing Han’s brash air of arrogance, that trademark smirking swagger –  but it’s not a complete 1:1 replication of Ford’s efforts as he injects his own DNA into the mix. The end result is great – better even if you stopped doing frame-by-frame comparisons – and makes me want to see more of him.

You’re more than welcome to do frame-by-frame comparisons of Donald Glover as a young Lando Calrissian though, as he so perfectly embodies the velvety smooth charm of Billy Dee Williams’ original gambler that it’s unnerving. Newcomers to this universe include a feisty Emilia Clarke as Qu’ira, young Han Solo’s slum-crossed lover who grew up rough right beside him in the Corellian underworld and the reason why he gets into the criminal business. We also have Woody Harrelson as Tobias Beckett, a world-weary hoodlum with a carnival gunslinger’s panache and unruly cowlick who takes Han under his unlawful wing during a big job for gang lord Dryden Vos, played by Paul Bettany with highly enjoyable villainous gusto. 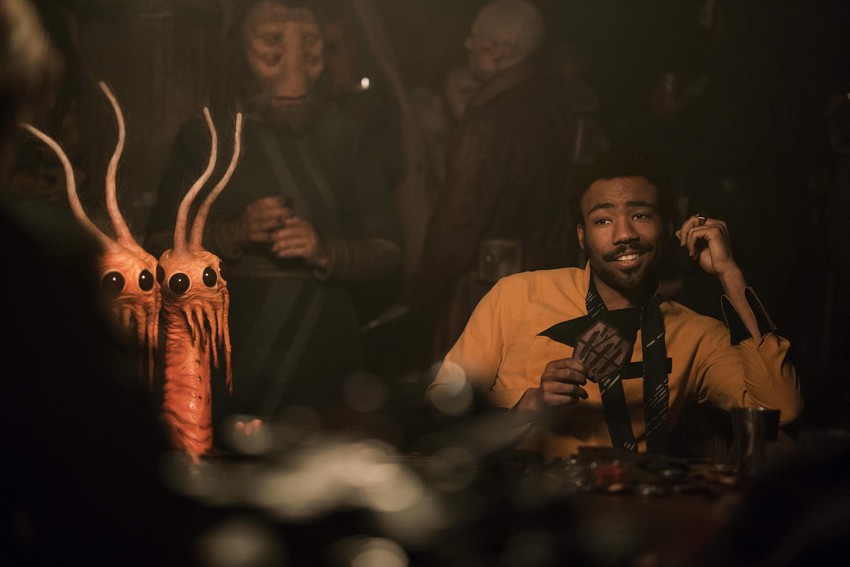 They are also joined on this adventure – which sees Han and co have to pull off a seemingly impossible score for Vos or forfeit their lives – by soon-to-be inseparable Wookiee companion Chewbacca (Joonas Suotamo), badass lady thief Val (Thandie Newton), and hilariously revolutionary droid L3-3T (Phoebe Waller-Bridge). Some of these characters are underused and there also appears to be a recurring trope with characters of certain ilk in the new Star Wars movies – not to mention that the female characters are hard done by as they exist for the most part only in relation to the men in their lives – but the actors themselves all turn in great performances.

Along the way, we get to see just how Han Solo goes from smart-mouthed Corellian street kid to the smarmy owner of the Millennium Falcon we would eventually get to meet and love years later. And boy, we really do get to see it all. How Han meets Chewie. How Han meets Lando. Where he got his blaster. How he won the Millennium Falcon. All of it and more. If you can think of an iconic trait about Han Solo, then chances are that this movie has a scene explaining its origin in elaborate detail. 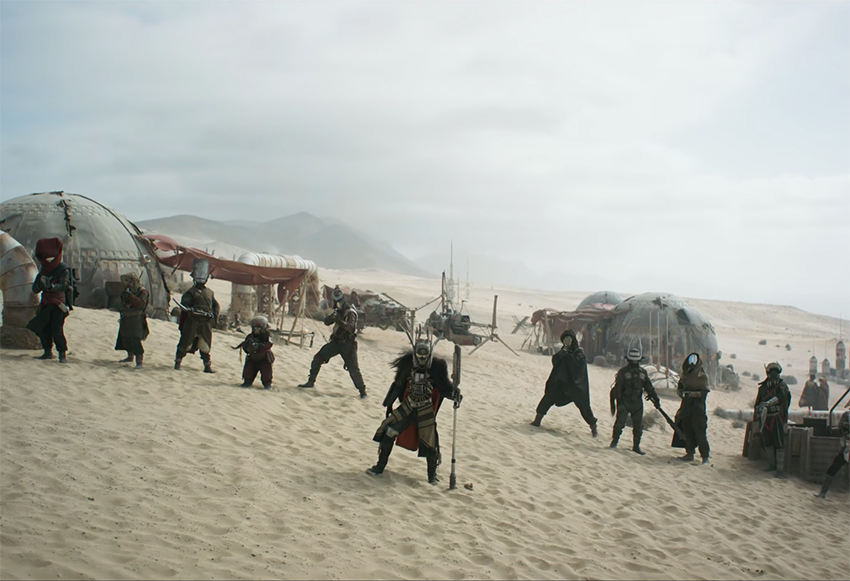 The problem is that some of these are headscratchers, taking great pains to provide carefully spelled out answers to questions no fan has ever thought it worthwhile to ask. It strips the character of mysteries we didn’t even know were mysteries to begin with. These bits of unnecessary scripting from father-son screenwriting duo Lawrence and Jake Kasdan luckily do get overshadowed by some other rather clever twists to the more “well-known” events in Solo’s life though, juking and jiving the narrative into places that are not only surprising, but actually left me chomping at the bit to see where it goes next.

Of course, all the story’s plot twists pale in comparison to Solo: A Star Wars Story’s headline-grabbing on-set drama, which saw Lucasfilm President Kathleen Kennedy fire original co-directors Phil Lord and Chris Miller well into production, replacing the hotshot duo with veteran Ron Howard. Fighting against the clock, Howard had to get things back on course, an effort that reportedly consisted of the stately filmmaker having to shoot up to 70% new footage for the film. Not that you would notice though from this completely seamless production, as Howard turns in a film that feels shockingly cohesive for something that needed to be stitched back together. 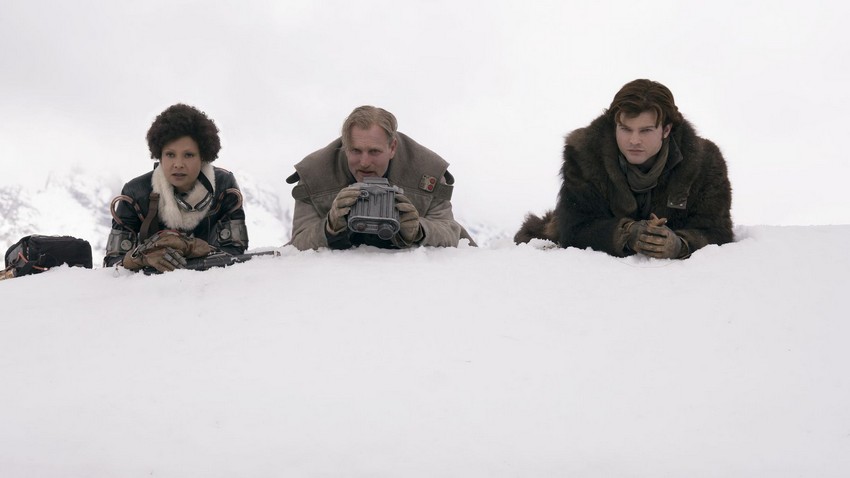 While the film’s early goings do feel a tad clumsy and exposition-laden as Ehrenreich and Clarke are saddled with some brief bits of clunky dialogue, once Solo hits the first of a series of thrilling, multi-pronged action set-pieces it simply roars along with breakneck abandon to a stunner of a finish. There’s no “chosen one,” weight of the world pathos dragging things down here, lending it all a highly infectious breezy charm. In other words, it’s just a whole lot of damn fun.

It’s also very effectively staged and shot by Howard. The director doesn’t quite have the iconoclastic flair for the visually dramatic that Rian Johnson did and so won’t be dropping jaws as frequently or violently as other recent Star Wars efforts, but everything looks tangibly grimy or beautifully shiny where it must – this is a living, breathing world realized fully on-screen. When we get into the film’s roller-coaster action sequences though, the staging and framing is gloriously exciting at times, having you dip and swerve in your seat with every Millennium Falcon barrel roll or explosive high-speed train flip. 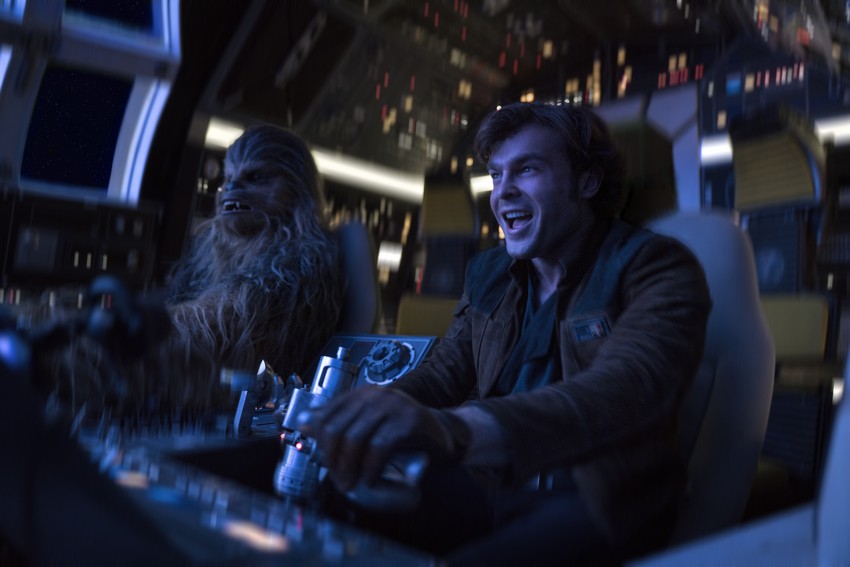 And that’s really where Solo: A Star Wars Story shines. It’s a roaring, hyperfueled space action adventure, stripped of the mythology and pomp of its main saga cousins (some may find the latter a criticism as it lowers its overarching importance, but I find it a relief – not everything needs to be a duel of fates). Overall, it’s a little awkward in places with its plans not always being well thought out, but most of the time it struts around with a supreme air of devil-may-care confidence belying its troubled past, shooting first, asking questions later, and having a blast while doing so. In other words, it’s a Han Solo movie.