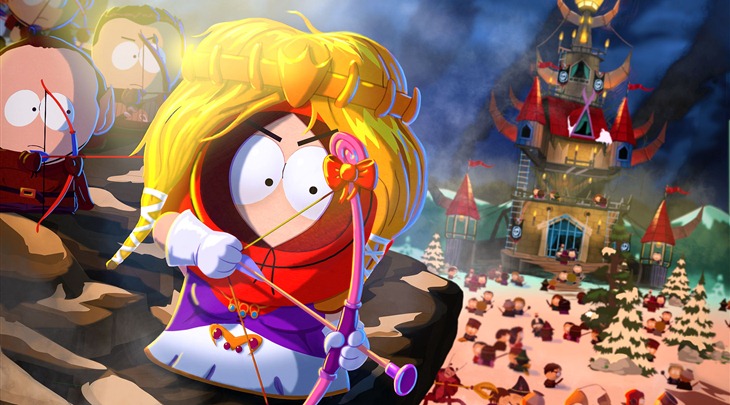 And I’m finally allowed to talk about South Park again! In case you haven’t noticed, I had a blast playing the game, which was a mix of great combat mixed with even better jokes. I’m not the only person who played it however, so c’mon down to this article and meet some reviews of mine.

The Stick of Truth makes one thing abundantly clear: I never want to play another South Park video game made without Trey Parker and Matt Stone’s direct, intimate involvement. With a controller in your hand, you are almost literally – gloriously – playing a 14-hour episode of South Park.

South Park: The Stick of Truth could stand alone as an extended episode of the show. Whether that’s a good thing or a bad thing depends on how funny you think Trey Parker and Matt Stone are. For fans of the show, this is a seriously impressive game.

In general, wandering through South Park is a ton of fun—which, for me, just made those stuttering issues even more annoying. I wanted to take my time, saunter around the city, and soak in every moment of the game, but it’s tough to really get into a game like Stick of Truthwhen things don’t run smoothly.P

So if you’re thinking about getting this one, especially on consoles, wait it out. Give Obsidian a little while to patch the game, or else you’re rolling the dice in hopes that your experience won’t be as broken as mine. Stick of Truth is a foul, wonderful, hilarious game, and it’s worth your time—just not until it works properly.

If you don’t watch South Park that often, you most likely won’t enjoy The Stick of Truth as much as someone who does. The RPG elements are very serviceable but they’re not going to satiate most of the hardcore genre fans out there. It’s a good thing then that the rest of the package is filled with so much care from the show’s creators, that it makes it something truly special.

How you’ll feel about South Park: The Stick of Truth comes down to how you prefer the peanut butter to chocolate ratio in this weird little flavor mash-up. To get the most out of it, you have to buy into its world; you have to play pretend. More than that, you’re going to want to know the kids you’re playing with. If you’re well-versed in South Park history and can imagine cookies as a "health potion," you’re off to a good start. If you can also forgive the repetitive nature of combat and some uninspired quests, it’s worth taking up arms – or dildos – for The Stick of Truth‘s hilarious, disgusting adventure.

For all that, The Stick Of Truth is surprisingly game-literate. There’s a suite of in-jokes, ranging from the collectable toys that ape Pokémon to more overt nods to Skyrim and even 8bit RPGs. Elsewhere, conventions are sent up gloriously.

Repeating soundbites are excused by NPCs insisting they’re being forced to stick to the script, while an inspired gag about audio logs only gets funnier the more you find. The jabs can be predictable, but they’re delivered with an affectionate wink, and it’s evident that Parker and Stone know and love videogames.

South Park: The Stick of Truth is not the second coming of role-playing games, so if you come seeking Jesus, you’ll be disappointed by the veritable second-rate televangelist you find in His place. But it’s as funny as the merry tune of Stratford, and more enjoyable than Butters’ favorite game, Hello Kitty: Island Adventure.

South Park: The Stick of Truth launches locally this Friday for PC and consoles. Remember, the PC version is uncensored and uncut.