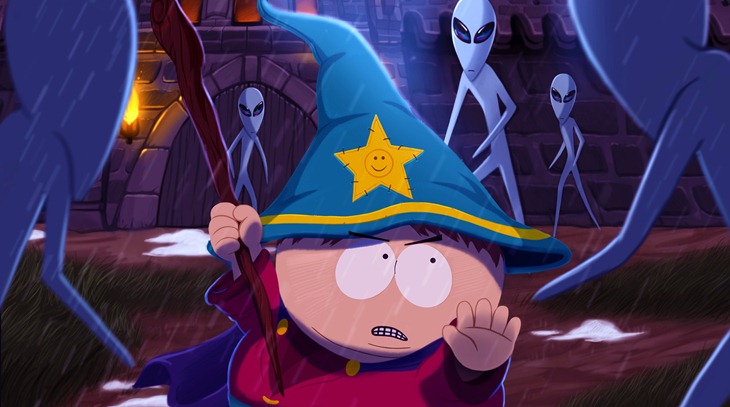 It’s offensive. It’s crude. It pushes the boundaries of taste and is more offensive than finding presidential used condoms outside of an abortion clinic. And that’s just the regular South Park cartoon which has been on TV since the 1990s. The game? It’s all that, but amplified to a new degree of vicious and intelligent comedy. And dammit, it’s given me the best laugh in ages.

What would Brian Boitano do?

Ever since South Park hit the airwaves in 1997, the series has poked fun at everything that it possibly could. Catholics, the Japanese, stem cell research and immigration issues were just the tip of the iceberg that Matt Stone and Trey Parker covered with uncompromising honesty and brutality. 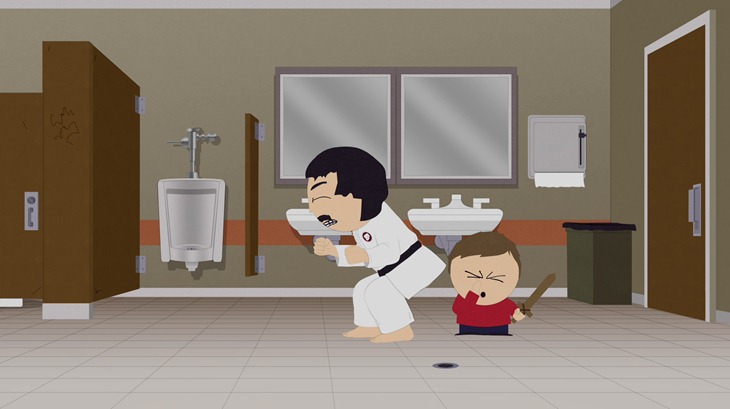 And video games were no exception. From the Chinpokomon craze, the Okama Gamesphere and the legendary end of the world…of Warcraft, South Park episodes haven’t just provided a good chuckle over the gaming industry. They’ve done it in a manner that was intelligent and well researched.

The Stick of Truth carries that theme proudly, as players find themselves adopting the persona of “The new kid”. Soon embroiled in a war between Eric Cartman’s Kingdom of Kupa Keep (For the KKK!) and Kyle Brovloski’s Elven forces for the mythical and all-powerful Stick of Truth, things soon get out of hand. 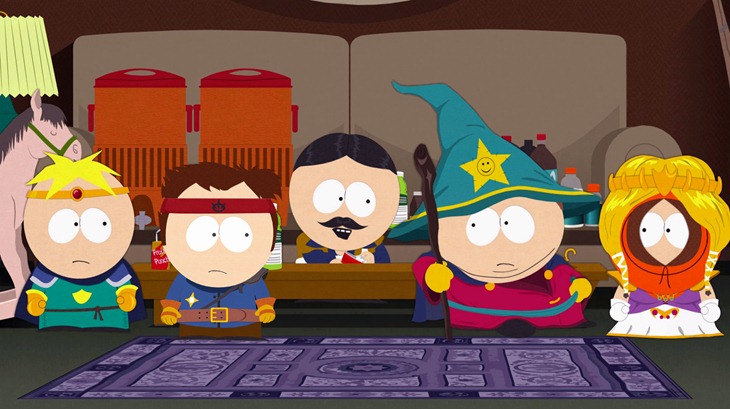 As the new kid, players find themselves engaged in a mix of point ‘n click and adventure gaming, with role-playing mechanics dominating in battle. The Stick of Truth feels like an old mid-90s adventure game, the kind that starred Leisure Suit Larry, Grim Fandango and Beavis ‘n Butthead, as players interact with their environment and solve puzzles.

But the combat itself walks a decent line of being simple enough to grasp, yet offering enough of a challenge. While the usual RPG tropes are present, from an inventory that can be managed with various weapons and armour being unlocked, it’s the slow yet quick nature of combat that takes precedence. 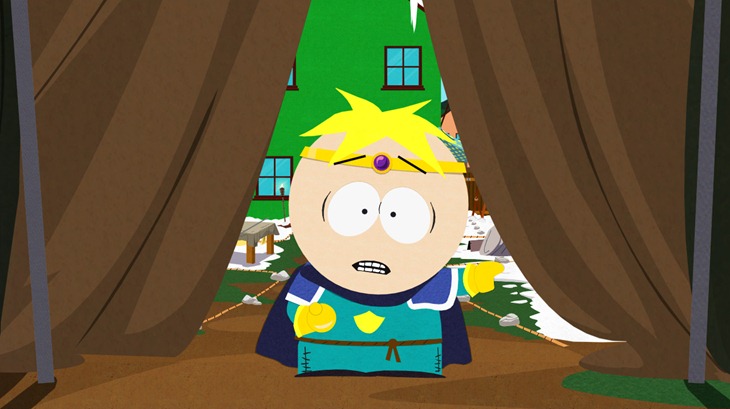 When engaged with an enemy, combat takes a turn-based approach.  Players can attack with melee weapons such as a sex toy or a cardboard dagger and ranged weapons. Players also have unique special attacks, with their magic being cast straight from their anus and coming in varieties such as the stomach-churning Cup-A-Spell and the devastating Nagasaki.

In addition to all that, there’re also a few special abilities based on the class that players choose at the start of the game. One can be a Wizard, a Thief, a Warrior or a Jew and totally not be friends with Eric Cartman if they choose that final class according to Mel Gibson because his film The Passion does not lie. 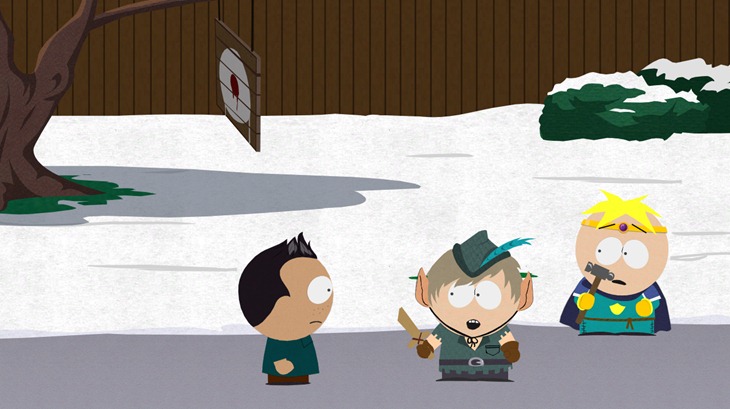 So a good dozen abilities which can be levelled up and augmented? For RPG fans, that’s intro level stuff and hardly complex at all. But where the game differs is in how those attacks are used. Players need good timing, as attacks can only be used when the correct input button is used, something that requires you to keep an eye on the screen and wait for a prompt.

A Thief backstab attack, for example, requires you to carefully match three prompts before burying a dagger in the back of a foe like a Game of Thrones wedding. Magic attacks will have players inputting a range of keys and finding the sweet spot of your sphincter in order to unleash such devastating magic. It’s simple on the outset really, but with Obsidian developing this game, the RPG mechanics go much further.

You’ll also have a partner with you in battle, with more unlocked along the way. From Butters the Paladin, through to Stan the Ranger, Cartman the Grand Wizard, Princess Kenny, Elf Lord Kyle and Jimmy the b…Ba…b…barhar…Barrhar…Barrrherr…Bard. 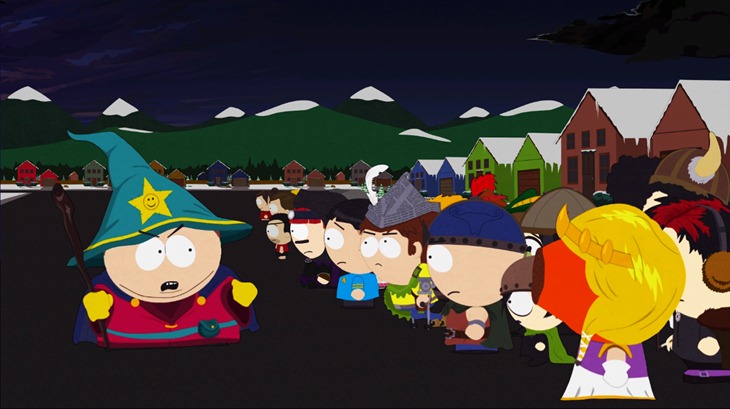 Partners can be swapped out an any time, and each one boasts their own arsenal of unique movies and attacks. Stan can use his George Clooney-voiced Mutt to knock down defenses, Butters can heal players and transform into his deadly alter-ego Professor Chaos, while Cartman can utilise deadly methane-magic that will have you respecting his authoritah. 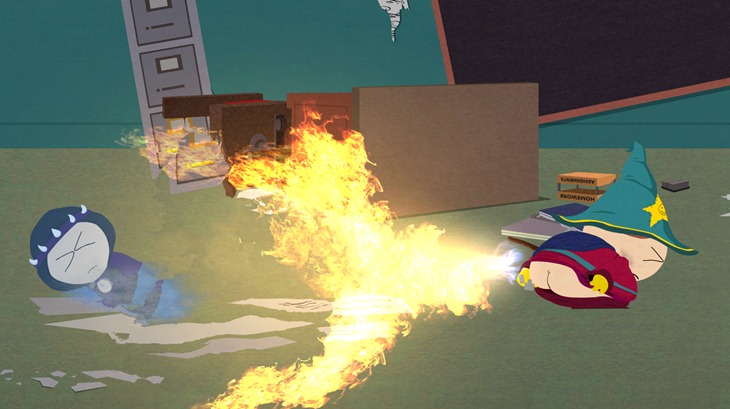 If you thought that the current South Park episodes were pushing new boundaries in taste and what’s acceptable on TV, then The Stick of Truth lifts the lid off of what the show is really capable of showing. From the usual racially stereotyped humour of Mr Lu Kim from City Wok recruiting you to help rid his shop of those damn Mongorians Mongolians, through to a quest to quite literally find Jesus, the game soon takes a turn into a realm that is devoid of any parental watch groups.

There’s a battle with an Underpants Warlock Gnome on the bed of your fornicating parents, where environmental hazards such as a swinging pair of hairy testicles need to be avoided. Ginger children become even lamer when exposed to a toxic goo that turns them into Nazi zombies. Kim Kardashian’s latest foetal abortion mutates and it’s up to you to kill it for good this time. The game just doesn’t hold back. Well, unless you’re on console that is, as some content has been cut. 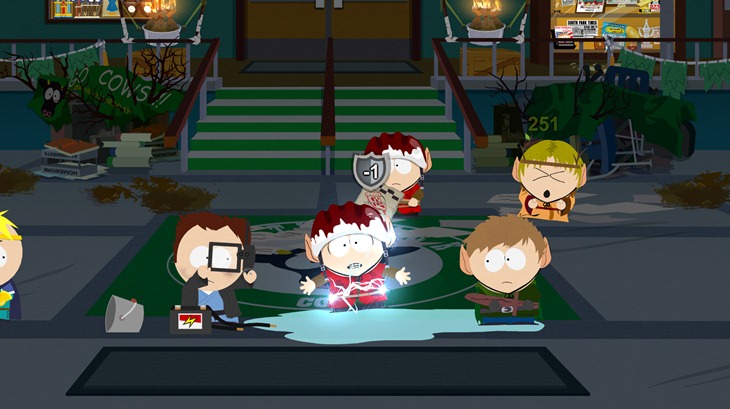 And much like the TV series source material, The Stick of Truth is a crudely animated product with animation clearly derived from a Terry Gilliam Monty Python cartoon. But therein lies the charm of this game.

The Stick of Truth is crawling with references and nods to the past of South Park. TVs regularly play episodes of Terrance and Phillip. Radios play hit songs such as Taco-flavoured kisses and Montage. In Jimbo’s gun shop, you’ll find ScuzzleButt all stuffed and mounted. Next to Shitty City Wok, you’ll find an abandoned tower of peace and a Japanese Sushi restaurant that has seen better days. 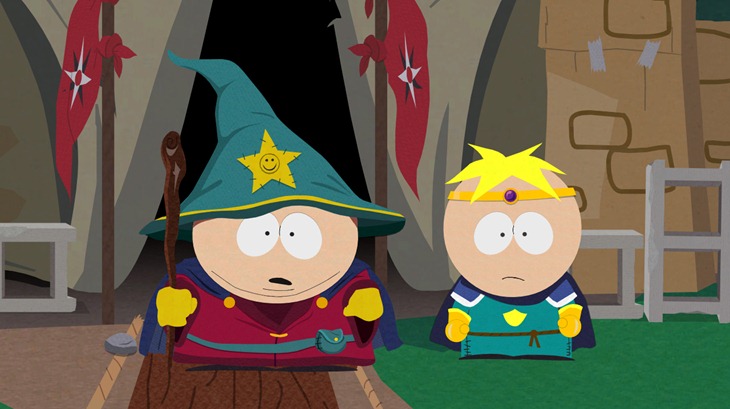 The game is crawling with such references, and the entire town of South Park is open to explore. It’s not as massive as GTA, but the game still feels like just the right size overall. Sometimes though, the 2D visuals don’t exactly work with the game formula, unnecessarily obstructing certain puzzles and solutions. It’s not a game-breaker, but it is annoying having to work around such features in order to progress.

As a pure single-player game, there’s plenty of content on offer. The main quest and several side quests will take in excess of 15 hours to complete. Beyond that however, the game is complete, with replayability coming in the form of starting all over again as a new, new kid and selecting a new class. But it’s worth it in order to experience several giggles all over again. Wow what a terrific audience

The biggest compliment that can be given to South Park: The Stick of Truth however, is that the game is more than happy to mock the genre and industry that it finds itself in. From a not so subtle nod from a black ops commander complaining that he happens to be “so f***ing sick” of Nazi zombies, through to a search for audio logs that happen to be all about audio logs, The Stick of Truth is wonderfully meta in its clever narrative.

The problem however, is that unless you’re a South Park fan, many, many references are going to fly over your head. It’s a game for the fans, and while newcomers might be a tad confused by the entire story and all the strange residents, it’s still the funniest video game ever made. Matt Hazard, eat your heart out. 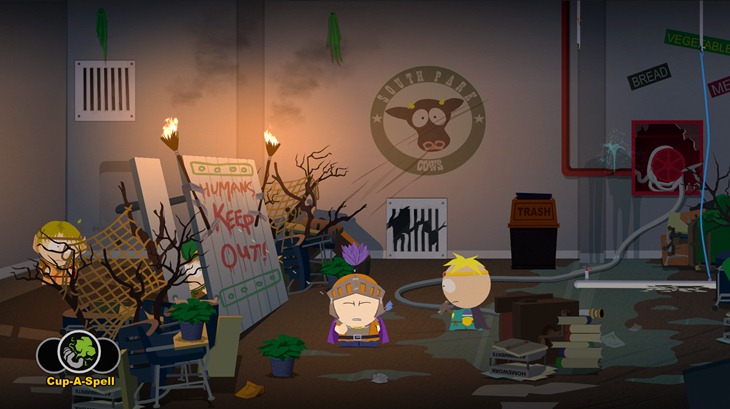