Somehow managing to squeeze the enormity that is Street Fighter into the palm of your hand, Capcom has ported over an experience that is both dazzling to watch and fun to play.

Almost visually identical to its high definition brethren, the 3D edition stays faithful to the core mechanics of the latest generation of Street Fighter games. The traditional one on one gameplay is still present, but players will now also have the chance to slug it out in the new â€œDynamic modeâ€, an over the shoulder third person perspective that better utilises the 3D graphics of the Nintendo handheld.

While the general look of the game perfectly captures the visual style of Street Fighter 4, Capcom has had to cut a few corners in this handheld conversion of the game. Characters may look highly detailed, but there is a loss of anti-aliasing in their presentation, while some of the more dynamic stages have been turned into static levels with frozen onlookers watching the action unfold. None of this truly brings the game down however, as the action still flows fast and freely, keeping some of the cinematic ultra combos intact while the combat itself never skips a beat, maintaining a constantly smooth framerate.

One of the downsides of putting Street Fighter onto the 3DS though, is the unavoidable awkwardness of the control scheme, at least amongst fighting game purists. The analogue stick makes special moves a tad easier to pull off, while playing the game in â€œLiteâ€ mode enables players to assign 4 different moves to the touch screen below, ready to be used whenever they feel like it, or when the combo and ultra meters have been sufficiently charged. Hardcore fans may already be shouting â€œLOL,FAG-NOOBâ€, but don’t stress guys! Pro mode dials back the potential hadoken-spamming for a better emphasis on tactical moves, providing balance for fans of all skill levels.

The StreetPass battle mode that the game has hyped is an amusing diversion, allowing players to purchase figurines with in-game credits or StreetPass tokens. Putting the system into sleep mode will allow the figurines to battle with other gamers who have done the same thing, parsing the stats of the impromptu battle royale to the gamer. There’s quite a few of these figurines to collect, and it’s a fun way to keep the game going. Online mode fortunately tosses aside the need for friend codes, allowing gamers to jump right into the thick of tournaments. Players can also watch matches in a special channel, while lag between matches is thankfully minimal.

It’s the Street Fighter we’ve all come to know ever since it successfully relaunched itself two years ago, but this time, the tight analogue controls have been supplemented by the touch screen, making up for the shortcomings of the 3DS control scheme. Purists might be angry, but it’s a worthwhile sacrifice.

The 3DS doesn’t have the strongest launch line-up right now, but if you want to show off the console to your friends, then this is the game is to get. A smooth and stunning port of the popular game, the 3D edition represents a strong future of the potential of the 3DS.

Love or hate, the best thing about fighting games is that they’re fantastic when it comes to social events. Whether you’re playing online or against friends in a wireless setting, Street Fighter 3D edition certainly provides hours of online and offline fun and challenges. Plus you still get to smash cars up in between levels.

Undoubtedly one of the strongest 3DS launch titles, Super Street Fighter 4 3D edition is a fantastic example of the new handheld, which manages to squeeze the core gameplay elements into an impressive fighting game that can easily stand next to its big screen brothers. 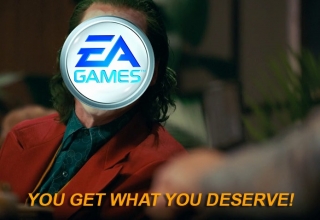 Kurt "Kurt0411" Fenech has been very very angry with EA since his lifetime ban from FIFA last year, posting new videos where he criticises the company and the game. EA has simply had enough, and have decided to ban Fenech for life from every single one of their products.