In a not too distant future, the world is dire. At least, the world of near-future England isn’t too great as an evil corporation has turned things into a caste system not too dissimilar to what was fought against by Robin Hood. How do you fight back? Well, you show the world just how they can take back what’s theirs.

Volume is a stealth simulation game that is uniquely self aware. You know you’re in a simulation because that’s the whole point – by simulating the stealth environments in each level, the protagonist is actually broadcasting to the world how to steal from the rich. It’s a nice way of setting up how the Volume (the simulated environment) works, without having to explain how the character is moving from one location to the next. 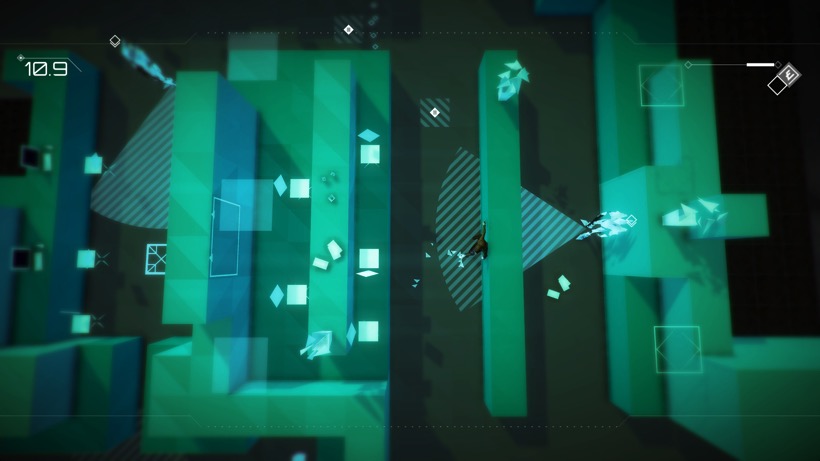 Taking place after the events of Thomas Was Alone, players take on the role of Rob Locksley as he stealthily maneuvers through the various levels as guided by his programmed-to-be-likable, Alan AI. Alan has to do what Rob instructs him, but that doesn’t mean that their relationship is two dimensional, particularly as Alan learns about what has happened in England since his original training programs were running and how Gisborne has changed the world. While the main story is compelling, I also derived a whole lot of fun from following the side stories as found through small memos hidden around environments – the man who was finally asked out by his crush, or the fallout from the escaped AI of Thomas Was Alone.

While the voice acting and story-telling are obviously compelling, it’s the stealth elements that make the game worth playing. Players learn new skills as they progress from one level to the next with difficulty ramping up at a slow but progressive pace. Without a weapon to make things easier, players must instead maneuver Rob past guards to collect all the gems in the area without getting killed in the process. There are a range of tools to help with this, but they are only valid for one level and don’t stack in an inventory; it’s up the player to determine the order in which she’ll pick up the silencer (to run without noise over sound plates) or the trumpet (to make a noise to attract a guard) and when to use each. The controls on PC were easy to learn and intuitive, although I still prefer using a controller instead; the controls just feel more comfortable on the DS4. The isometric view-point helps to reveal potential threats throughout the level, yet it doesn’t make the game an absolute walk in the park as some levels can be quite daunting until you figure out the ideal route. 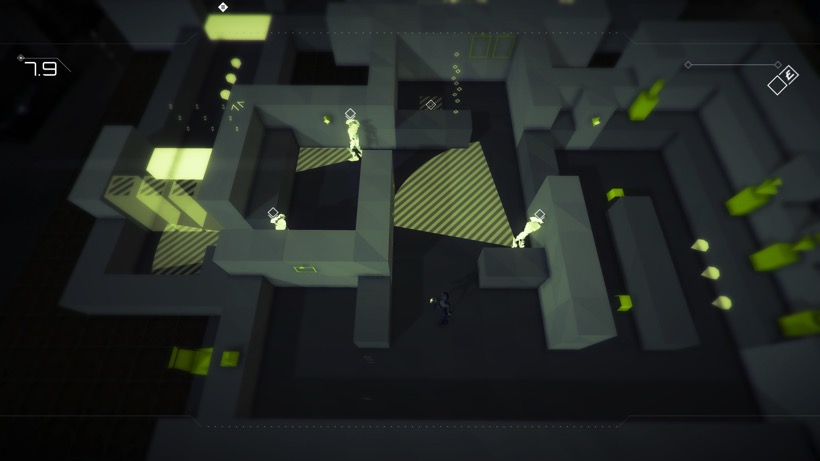 Sound design is key in this regard – the alert sound when guards spot you is so startling that I gasped each and every time, adding to my fear of being caught and my terror when it happened. While some guards can be out maneuvered in those situations thanks to check points and exit routes, more often than not, getting spotted is a death sentence. It adds a lot of tension to the experience, which is of course what you hope for in a stealth game.

While the aesthetic of the game is undeniably appealing, it matches the gameplay in the way it’s stripped down to fundamentals. It all feels clean, simple and incredibly slick; nothing in the visual or gameplay experience feels superfluous, but rather a beautifully modern approach to bare but beautiful bones. But behind the clearcut visuals and gameplay hides some impressively deep social commentary and humor. 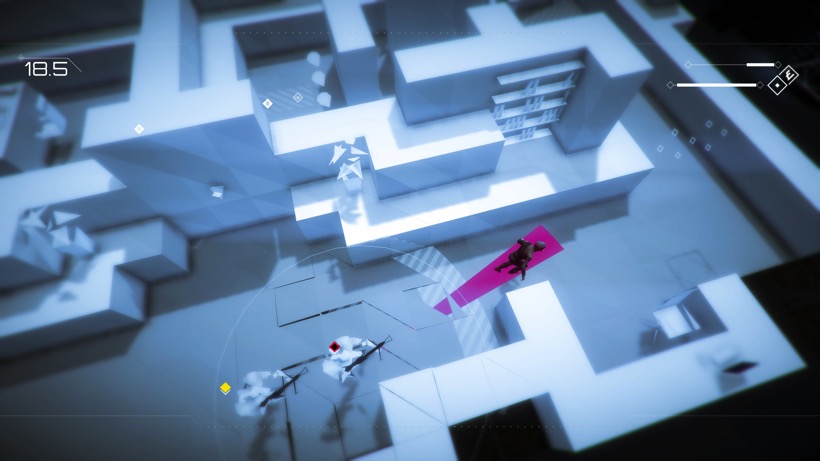 The witty banter between Rob and Alan made me laugh out loud, but it’s the commentary on our world that has stuck with me. Rob’s heists are seemingly Let’s Play videos; failed attempts are commented upon by Alan while particularly impressive moments are “worth more views”. The pacing of the story-telling is unique as well, with dialogue carrying on throughout levels so that you don’t miss things if you are particularly fast or slow with progress.

While the story and 100 core levels are wonderful, it’s the level editor that will add true longevity to the game. It is incredibly easy and intuitive to use, allowing people to already make a ton of challenging and unique levels. Sure, they won’t have the same voice acting over the top of them, but if you’re looking for new challenges and expanded gameplay, the level editors will make that happen. Plus, thanks to some curatorship from Mike Bithell, players can easily find some of the best levels created by the community without sifting through the hundreds of creations.