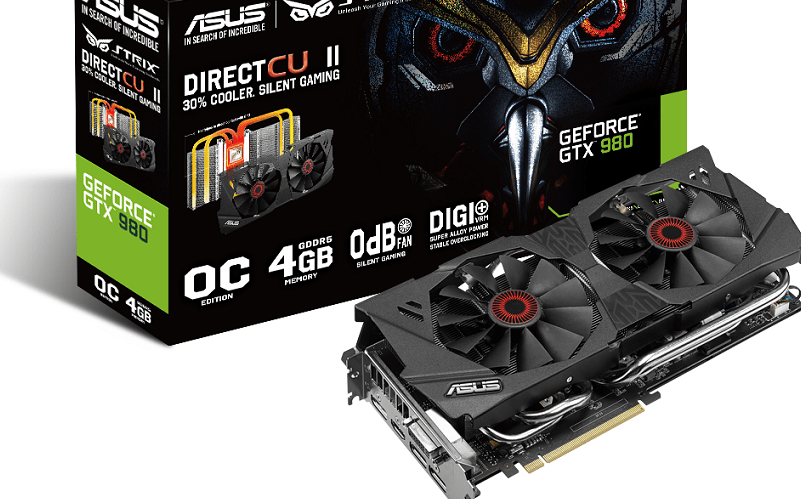 In the wee hours of this morning, Nvidia finally revealed their next generation of pixel pushing hardware, the GTX 980 and 970. They showed off all the new features and design elements using the normal, non-reference cards – which we’ll get to in greater detail in a bit.  But in today’s day and age, it’s the non-reference designs that thrive. And if you’re going non-reference, Asus is one of those companies you usually look to.

Not too long ago Asus revealed a new, 6GB GTX 780 using a new design named STRIX. That was seemingly just a test run, because the GTX 980 and 970 on Asus’ side of the fence will both be launching with the same design, The Asus STRIX 980 and 970 come with a few of the features you’d expect from a non-reference card, including improved cooling, better clock speed and exclusive features.

Both of the cards will ship with the tried and tested DirectCU II cooling solution along with the 0dB fan control that the STRIX design combines with it. That mean the fans will only rev up when they really need to, making your desktop experience virtually silent. The STRIX design also comes with the Digi+ voltage regulator and GPU Tweak for efficient and relatively easy overclocking.

The card itself isn’t that different from Nvidia’s reference, with the only real change being in the clock speed department. The GTX 980 and 970 will have increased core clock speeds of 1279MHz and 1253MHz respectively. What this translates into is a pretty tiny performance jump for the GTX 980, at around 3.7%, and a 7% boost for the GTX 970. Marginal, but still something to consider.

The performance differences aren’t really the reason why you should be looking at non-reference cards on launch day, but the cooling should be. DirectCU II has been used time and time again, and it’s probably the best thing about Asus’ branded cards. The STRIX design is also pretty intelligent in the way it deals with fan control. It’s a good match for the new Maxwell cards and could mark the future of Asus designs.

It wasn't too long ago that Nvidia revealed its latest absolute unit 3080 and 3070 cards, …