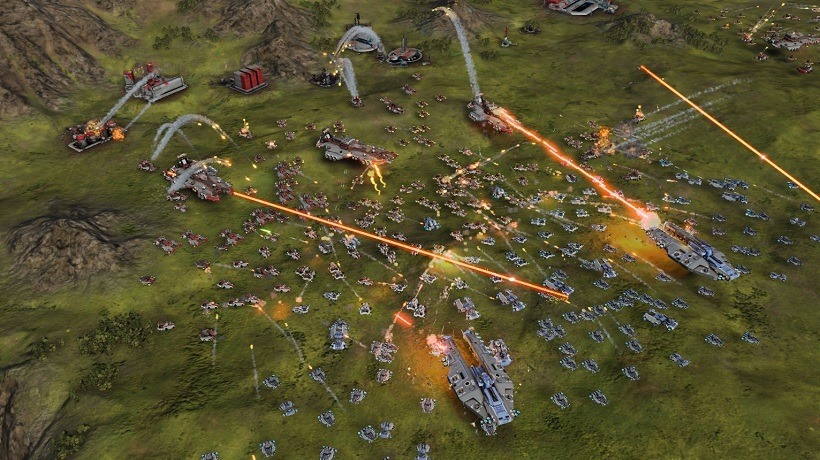 With Windows 10 now officially out we all finally have access to DirectX 12 – a brand new low-level API that will allow game developers to reach into our hardware and suck out more performance than we ever imagined possible. There are, however, no actual games that utilise it just yet, but a few tests are beginning to show just how important the API is to the future of gaming. And it’s not Nvidia who are leaving the gates flawlessly.

It is, in fact, AMD how are stealing the show with their performance. Using Oxide’s forthcoming Ashes of the Singularity (one of the only games with an available DX 12 benchmark), Digital Foundry tested both an Intel Core i7 4790K and Core i3 4130 with a GTX 970 and AMD R9 390. DirectX 12 is going to show most of its early gains in the CPU department, making this particularly CPU-heavy test a perfect proving ground for some early analysis.

Running on DX11, the AMD card coupled with the i3 and i7 managed average frames per second scores of just 24.1 and 28.4 respectively. Switch over to DX12 (again, on the exact same hardware), and the averages nearly double. The same hardware configuration now posts an average FPS of 39.9 with the Core i3, and 48.8 with the Core i7 – over 20FPS more thanks solely to DX 12 and AMD drivers.

The drivers, it seems, are a particular sticking point though. Running the exact same tests on Nvidia hardware produced very different results, with DX 12 performance on the Core i7 in particular actually being worse than on DX 11 (around 14% slower in fact). AMDs soaring success can be attributed to their horrible driver support for DX 11, but it is unequivocally clear that they’re leading the race in terms of this early test in the first DX 12 proving ground.

Nvidia, of course, didn’t take this lightly. Senior PR Manager Brian Burke was quick to dismiss the test results, stating that the pre-alpha nature of the game meant that optimisation wasn’t at a point where viable results could be produced.

We think the game looks intriguing, but an alpha benchmark has limited usefulness.  It will tell you how your system runs a series of preselected scenes from the alpha version of Ashes of Singularity. We do not believe it is a good indicator of overall DirectX 12 gaming performance.

We’ve worked closely with Microsoft for years on DirectX 12 and have powered every major DirectX 12 public demo they have shown.  We have the upmost confidence in DX12,  our DX12 drivers and our architecture’s ability to perform in DX12.

When accurate DX12 metrics arrive, the story will be the same as it was for DX11.

A bold statement of intent, but one that didn’t sit well with either Oxide or their publisher, Stardock. In response, Oxide refuted the claim that the test wasn’t optimised enough to deliver accurate results – pinning the blame squarely on Nvidia.

It should not be considered that because the game is not yet publically out, it’s not a legitimate test. While there are still optimizations to be had, Ashes of the Singularity in its pre-beta stage is as – or more – optimized as most released games. What’s the point of optimizing code 6 months after a title is released, after all? Certainly, things will change a bit until release. But PC games with digital updates are always changing, we certainly won’t hold back from making big changes post launch if we feel it makes the game better!

Stardock didn’t mince their words though, instead sending a clear message to those on the Green Team.

It seems that Nvidia now find themselves in a little bit of hot water over situation that could have simply been avoid with “our drivers aren’t yet ready”. It is, however, very good to see AMD jumping right back into the thick of it in terms of contention. DX 11 might have been a disaster for them, but good DX 12 drivers could see them neck and neck with the market holders once again.