Home Comics & Toys For $1200, you can grab a life-size replica of Venom 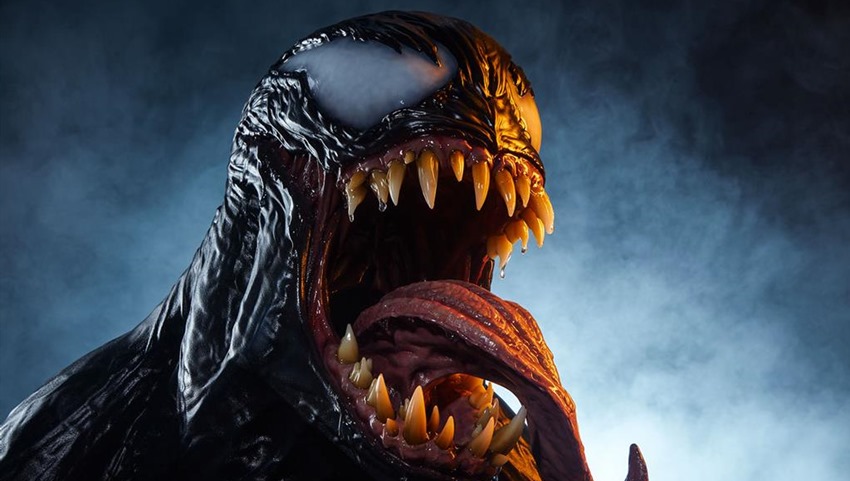 Eyes of pure malice, a tongue that could reach the inside of your colon and teeth sharper than Lee Mack’s witty retorts on an episode of Would I Lie To You? on the BBC. Enough about your mom though, let’s talk about Venom! The OG anti-hero has had a gangbuster year, thanks not only to the most metal comic book series ever created but also a film that did surprisingly well at the box office.

Venom is pretty much, hot stuff again. Which means that a ton of merchandise which is on the verge of a Gene Simmons lawsuit for infringing on his tongue gimmick, is on the way. Here’s one rather cool piece of symbiote action from Sideshow Collectibles: A full-size replica bust of the comic book icon that measures in at stupidly massive size:

Sideshow is proud to present the Venom Life-Size Bust, putting the ultimate symbiote on your shelf in epic 1:1 scale.

The fiberglass Venom Life-Size Bust has been sculpted with painstaking detail to capture his monstrous presence. His muscular shoulders are detailed with dynamic black symbiote textures, providing a stark contrast to his glossy white eyes and the raised spider-symbols on his chest and back. A sleek, simple black base puts the focus on Venom’s terrifying silhouette, while complimenting the other Marvel Life-Size collectibles from Sideshow.

That’s a whole lot of Symbiote that will of course, cost a whole lot of cash: $1195, and probably almost as much to ship it. It’s a hell of a replica though, crawling with all manner of gorgeous details and textures. Heck, that tongue is pretty impressive as well, and I love the added drool on the teeth. So…anyone want to buy me a nice Christmas present?