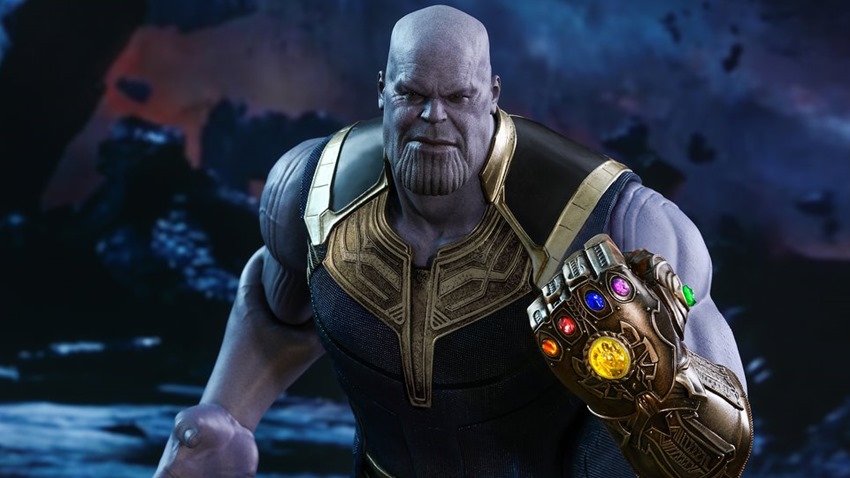 I’ve got a theory. You need to throw your memory back to a couple of months ago, for when the first trailer for Avengers: Infinity War was released online. Right at the end, that trailer features a glorious money shot of Avengers past, present and future running towards the camera to do battle with Thanos and his army of Outriders.

At that very moment, I have a feeling that Hot Toys grew a boner so massive over the excitement over just how many figures they were going to produce from one film, that it could be seen from space. That onslaught continues, with Hot Toys having already confirmed a stack of new figures related solely to Avengers: Infinity War.

What good is a shelf full of heroes with a villain though? Fortunately, there’s a massive sixth-scale replica just for that situation. Your wallet can run dread it. Run from it. Destiny still arrives:

It also comes with two styles of LED light up metallic gold-colored Infinity Gauntlets with all six Infinity Stones and weathering effect, an additional interchangeable non-articulated left arm with great muscle details for Thanos’ iconic and intimidating clenched fist pose, a newly sculpted and tailored armored costume with intricate details, and a specially designed figure base and backdrop.

In case you’re wondering just how big Thanos really is: He’s able to stand toe to toe with the Thor: Ragnarok Hulk, as they both measure in at over 41cm in height. All of that plastic will command a hefty price tag however, of over R4500 or $376 when Thanos arrives to claim the rest of your Infinity Stones next year June.