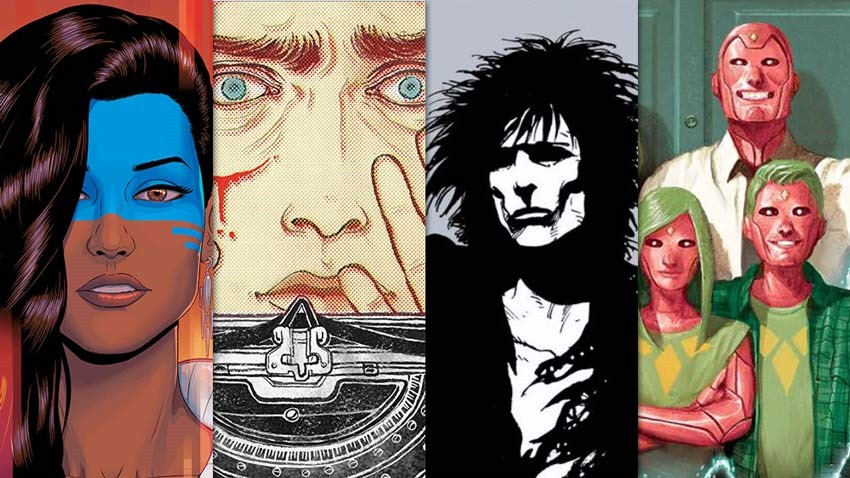 Comic books. Kids stuff, am I right? Not exactly, and while I could wax lyrically about how the medium has more variety than ever before, the real challenge lies in converting the naysayers over to the side of the greatest modern-day art form on shelves today. After all, how can comic books with their gaudy colours and predictable super-heroic plots hope to hold a candle to literary fare such as… I don’t know, is the Da Vinci Code still a thing?

The point is, is that within the field of comic books there exist stories that can easily take on the titans of the print industry. Tales of magic, wonder and sadness. Here are ten such examples, of comic books which will convince even the most devout book fanatic that the medium is more than capable of delivering a knockout punch in the literary universe. 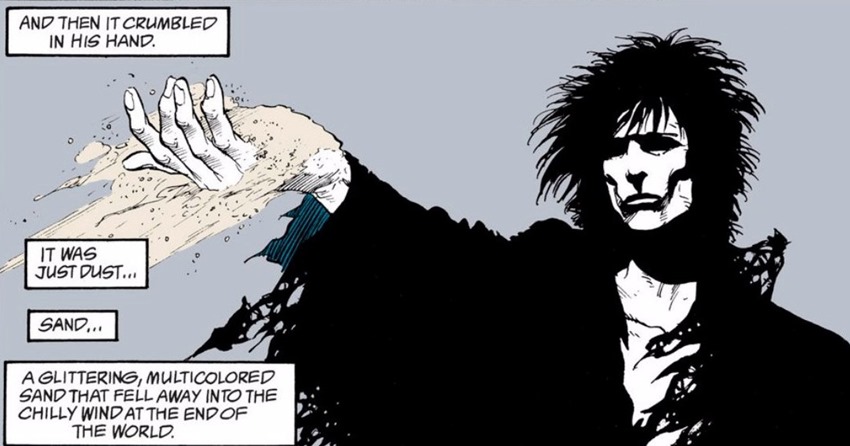 If we’re going to start this list, we might as well do so with one of the biggest guns in the comic book arsenal: Neil Gaiman’s Sandman. Deliciously deep and a game-changer in the comic book industry, Sandman is a story with a definitive beginning, middle and end. The magic of dreams and its personification, given life and a purpose, unfolds within Gaiman’s exceptionally deep and layered scripts.

Life, death and rebirth take centre stage in Sandman, as a host of talented artists visualise ten volumes of the Dreaming into a cohesive narrative that touches on just how important the ability to dream and imagine really is. When it comes to comic books that can grab even the most jaded of literature fans, Sandman is the reminder that good storytelling can exist in just about any medium it finds itself in. 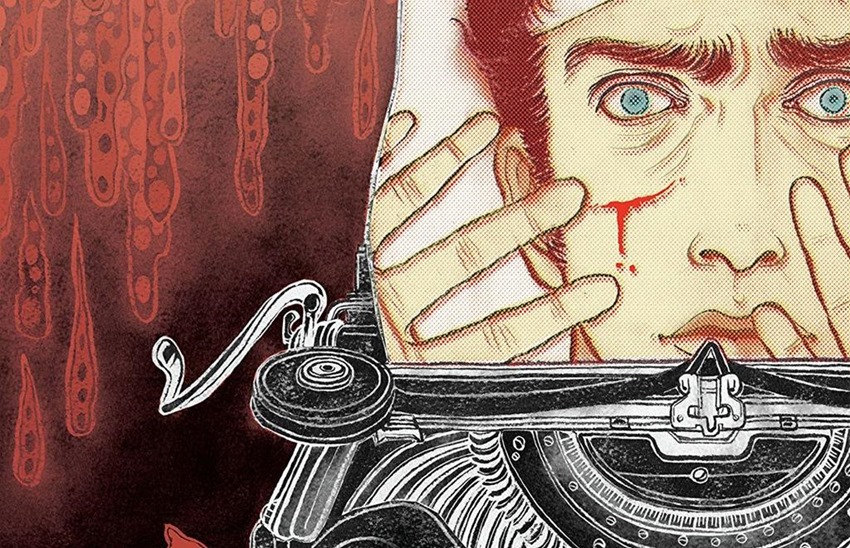 Guys, let me tell ya something: Mike Carey may just be one of the most underrated writers of our time. There’s a reason why he has a pair of listings on this feature, and it begins with The Unwritten. For anyone whoever scoffed at comic books and instead threw down cash for a new Harry Potter novel, The Unwritten is the series that should grab those naysayers by the hair and pull them face-first into a medium of pure imagination.

It’s a story about the power of stories, about the line between fiction and reality being a lot blurrier than we remember. The Unwritten is the magic of words, the heartache of family and of how literature has the power to shape not only our past and present, but also our future. An utterly magnificent collection of prose visualised by the expressive art of Peter Gross and the dreamlike colours of Chris Chuckry and Jeanne McGee. 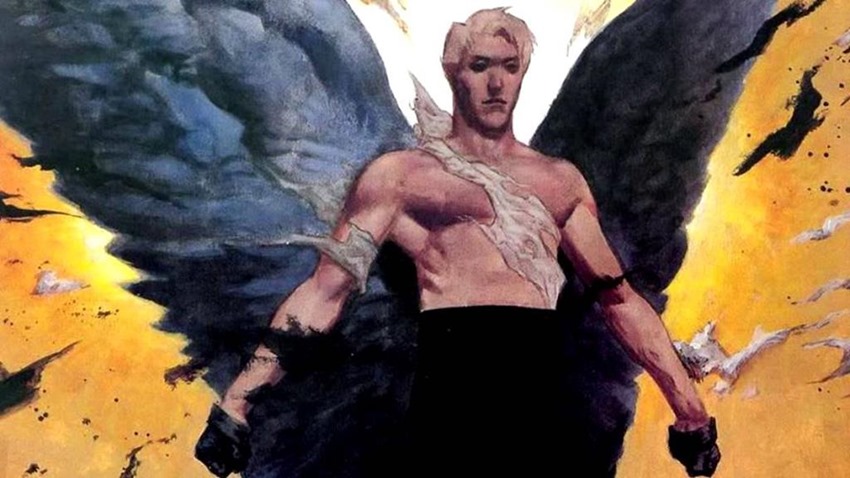 And if you liked that taste of the strength of literature, then you’re going to love this comic book series which asks a simple question: Can we determine our own fate? That’s the guiding question behind Lucifer, which sees the fallen angel ditch hell for Earth as he seeks to forge his own path. A path that is fraught with peril, as Lucifer Morningstar finds himself caught up in a Machiavellian game of treachery and backstabbing as he faces off against pantheons of foreign gods and supernatural foes.

If Sandman established DC’s Vertigo imprint as a contender in the realm of mature fiction, then Lucifer was the successor to Neil Gaiman’s grand design, carrying a torch that burned brighter than ever for a new generation of fans. A tale of free will triumphing over the machinations of fate, Lucifer is a rewarding and rebellious series that is still well worth a read today. 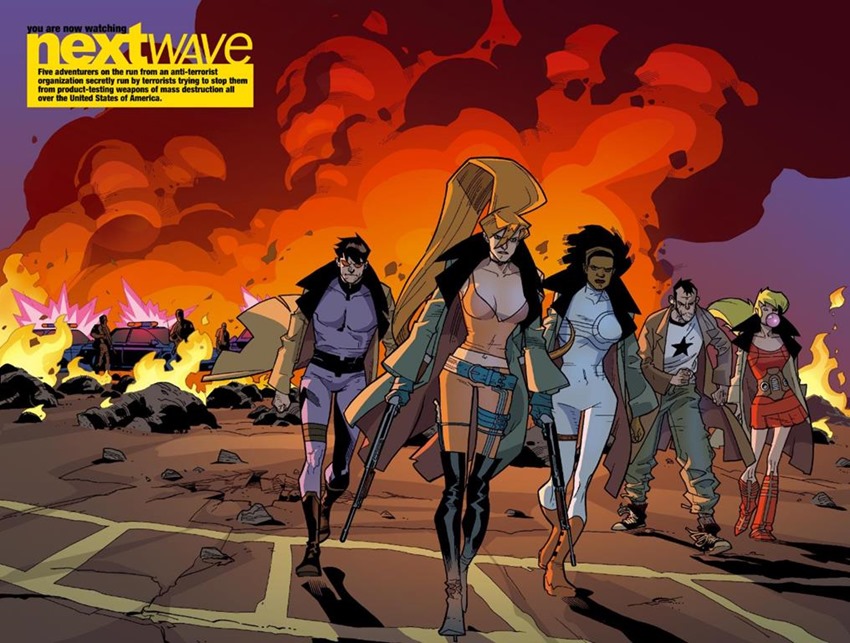 Superheroes are lame. That’s a sentiment shared by many a person who feels put-off by comic books. And you know what? You just might be right. Because when it comes to superheroes being terrible walking weapons of mass property destruction, none are worse than the team of misfits in Nextwave: Agents of H.A.T.E.

The lowest of the low, Nextwave takes a cliched genre and rolls with it, offering a grand tale of failure, killer koala bears and ordinary people forced into extraordinary situations that bring out the worst in them. Nextwave doesn’t just poke fun at superheroes, it sneaks up from behind and lays them out cold with a sledgehammer to the head of sharp dialogue from Warren Ellis and incredibly vibrant art from Stuart Immonen. 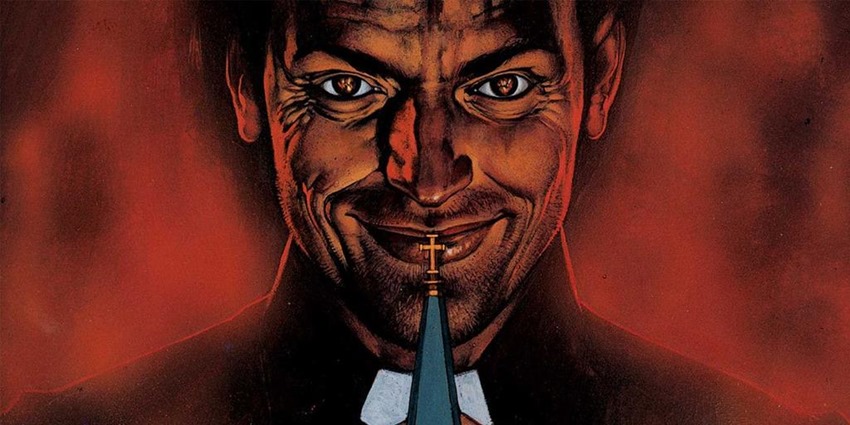 If you’ve ever questioned the dogma of religion or the blind fanaticism that faith can stir within people, then Preacher might just be for you. Essentially a modern day western at its core, Preacher takes the idea of God abandoning his duties and runs wild with it. Often sadistic, sometimes depraved and always focused, Preacher is one of the grandest tales ever printed.

Writer Garth Ennis and the late great artist Steve Dillon’s masterpiece of camaraderie and always standing for what’s right is a reminder that we can all be better people. It’s a romantic tale that sets the world on fire, a last ride for the western genre that builds momentum early on and never loses that steam as heaven and hell wreak havoc on the world of Jesse Custer, Tulip O’Hare and Cassidy. Stand tall, walk proud and stand by your friends until the end of the world. 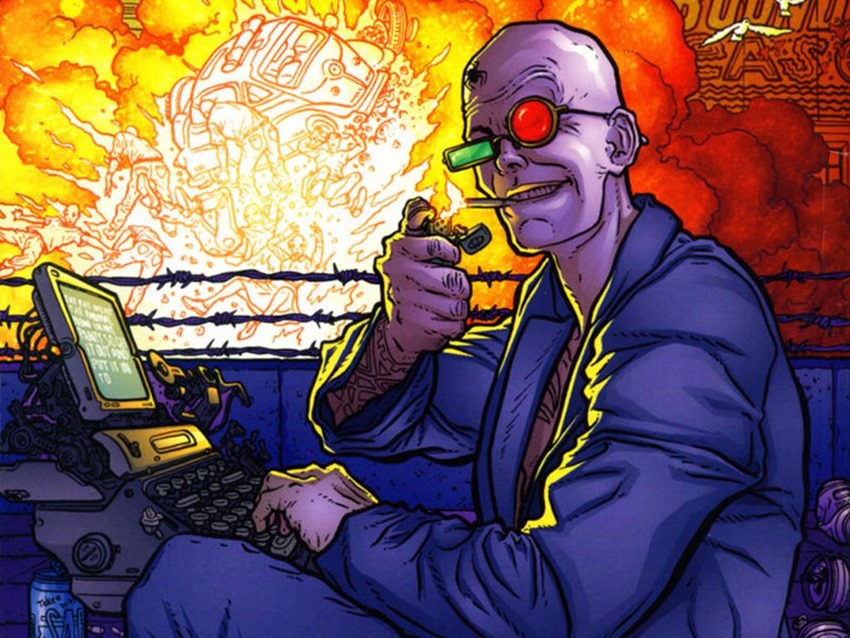 The future is coming, and it is the scariest f***ing thing you won’t ever live to see. Written by Warren Ellis and drawn by Darick Robertson, Transmetropolitan is a look ahead through the mad eyes of a journalist who has seen and snorted it all. It’s a saga of the sins of the past being repeated, that feels oddly relevant in today’s political climate of power-hungry presidents and the fascist censorship of unlimited information.

It’s the ballsy journalism of Hunter S. Thompson visualised with startling accuracy, a reminder of just how important the truth will always be no matter which age we find ourselves living in. Bold, brilliant and utterly gonzo in its visual madness, Transmetropolitan is an unflinchingly harsh look at the future that we’re headed towards. 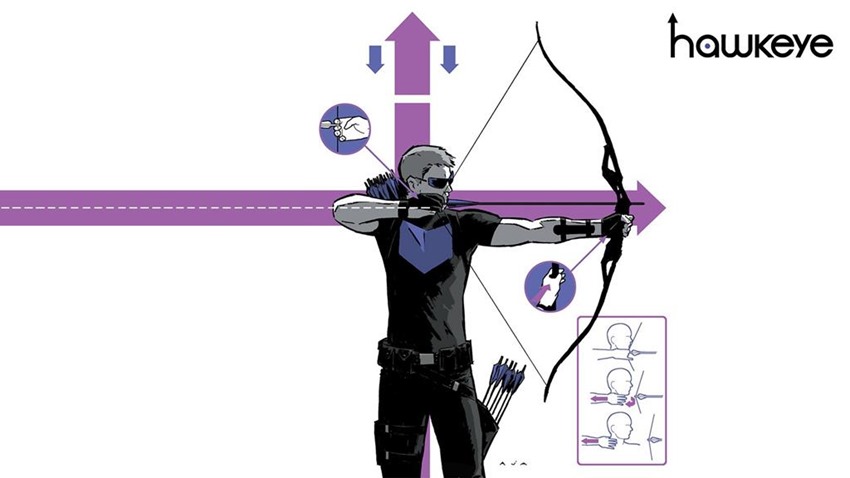 The Wire. The Sopranos. The Shield. Maybe something else that starts with “The”, but that’s beside the point. Some of the greatest shows on television have been gritty street-level dramas that go behind the scenes of what it means to wear a badge of honour or work in the shadows against the law. Hawkeye is one such example of a more down to Earth superhero, a simple (exceptionally talented) archer who finds himself battling gods on Tuesdays and trying to make sense of cosmic conflicts the day after.

Writer Matt Fraction’s Hawkeye series is Marvel’s forgotten mundane side made dangerous and real. It’s also beautifully expressed through the art of David Aja, never skipping a beat and creating a seamless visual flow that can capture the minutiae of action with the fewest strokes of a pen possible. Hawkeye may be gritty, but it never wallows in despair and often finds the time 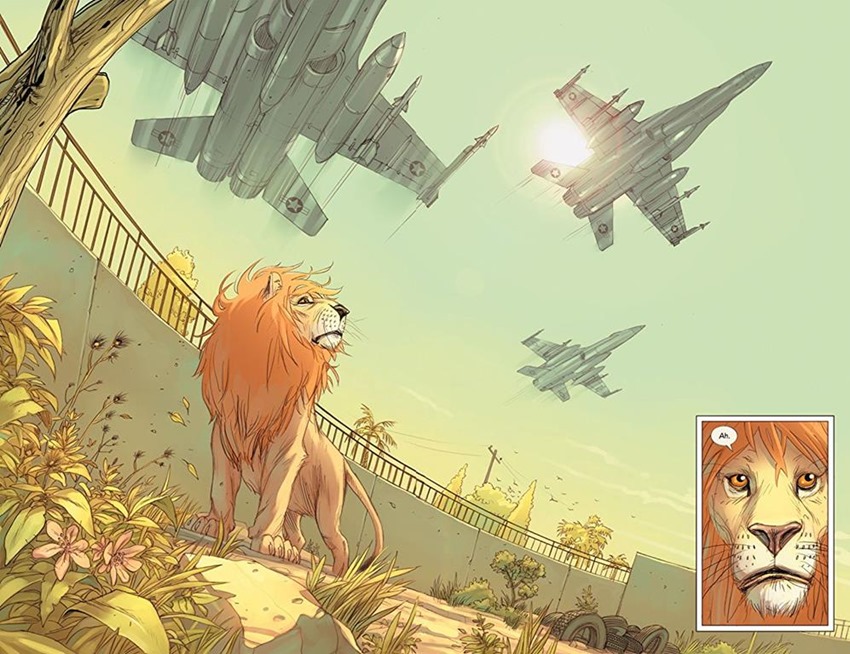 I can guarantee you that someone is going to demand to know why Brian K. Vaughn’s Saga isn’t on this list, and I can give you a good reason why: It’s too mad. If you’re going to grab someone by the eyeballs and give them a chance to reconsider their stance on comic books, you don’t want to dip your hands in broken glass bottle shards and barbed wire.

You want a gentle touch, that guides them on the way… and then kicks them in the gut with a payoff that’ll leave you wishing that those damn ninjas would stop chopping onions under your eyes. Pride of Baghdad is that comic book, a monumentally important piece of fiction told through the eyes of animals, not people.

In a war that left thousands dead and even more people broken, nary a thought was given to the animals trapped in the streets and the zoos of Baghdad during the Iraqi War. In one heartbreaking journey of survival, Pride of Baghdad reminds you that war destroys everything. That humanity has a monstrous side to it, whose effects ripple throughout the world and the animal kingdom.

Layered and powerful in its structure thanks to the sublime art of Niko Henrichon, Pride of Baghdad is essential reading material that’ll easily kick any John Grisham or Stephen King bestseller square in the teeth and feast on its remains. 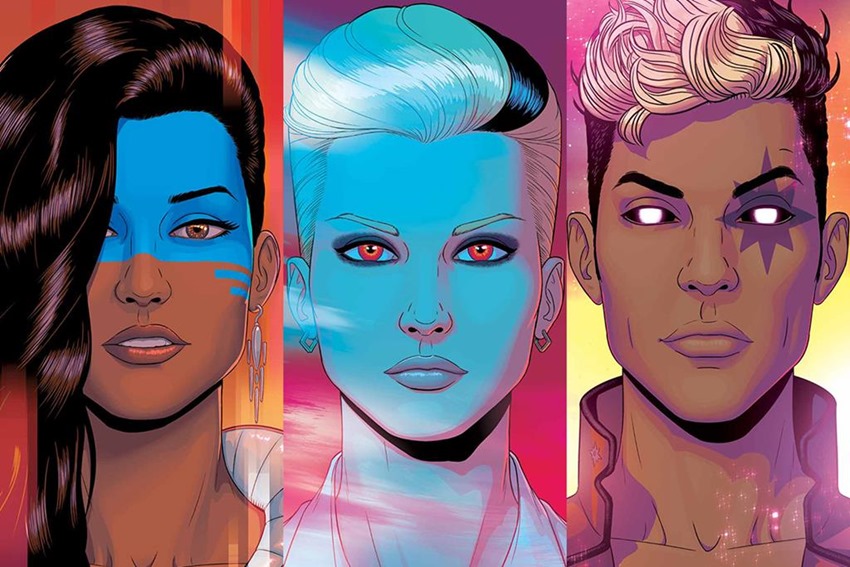 Gods, music and worship. A simple sentence which can be used to sum up The Wicked + The Divine, but a description which at the same time does it a great disservice as this multi-faceted title is anything but “simple”. In a world where the gods have returned and a new generation of doting followers have risen to celebrate their devotion through social media, The Wicked + The Divine seamlessly blends the idea of placing celebrities on a pedestal and worshipping them until they’ve served their purpose and have been discarded.

New churches are formed, religions are turned upside down and society is forever changed in a series that is breathtakingly imagined through the deep script of writer Keiron Gillen and the smooth inks of Jamie McKelvie. Gods live, deities die and an obsession with fame and immortality through any means possible lingers on through a modern mythology of death and rebirth. 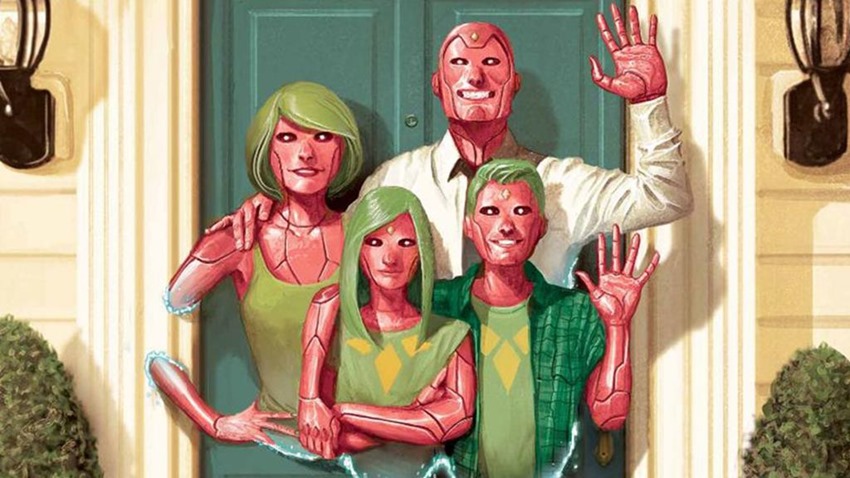 What does it mean to be human? Is it even worth it? In Tom King’s Vision, the answer is a very definite “No”. Having saved the world plenty of times and earned a family in the process, the synthetic Avenger Vision finally decides to settle down and live a life in suburbia amidst his curious neighbours. Wacky hijinks ensue! And by wacky hijinks, I mean chaos, societal shunning and murder most foul as the family of tomorrow find themselves caught in the middle of humanity’s combined hatred for anything different.

Vision is a series that starts with hope and ends with heartbreak, a magnifying glass pointed over the idea of morality as an indifferent sun starts focusing an intense focus through it. What is right and wrong? Is kindness a better path in the end? Vision leaves you with as many questions as it answers near the end, and you’ll never be the same after you’ve turned the final page on this chilling tale. 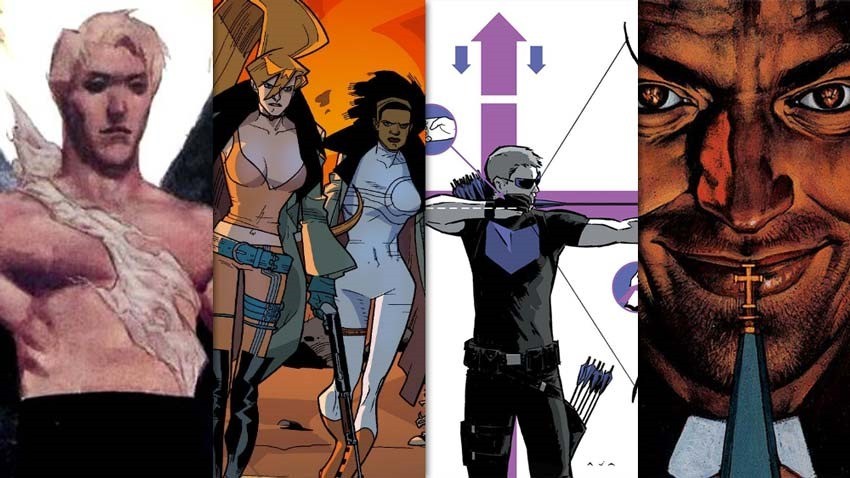