With mainstream superhero comics seemingly stuck in a cycle of reboots, tired rehashes and “universe-altering mega events” that never seem to affect anything for longer than six months, the tangled, lore-burdened genre is no longer the best choice to introduce newcomers to the storytelling medium.

Fortunately, when it comes to comics we live in a golden age of genre choice, readily available through digital channels even if you don’t have easy access to a comic book store. So it’s more a question of finding something that fits your entertainment preferences, or the tastes of whoever you’re trying to gateway to comics. That may be slice-of-life stuff, erotica, pulp adventure, sci-fi, or, that perennial, accessible favourite, crime. 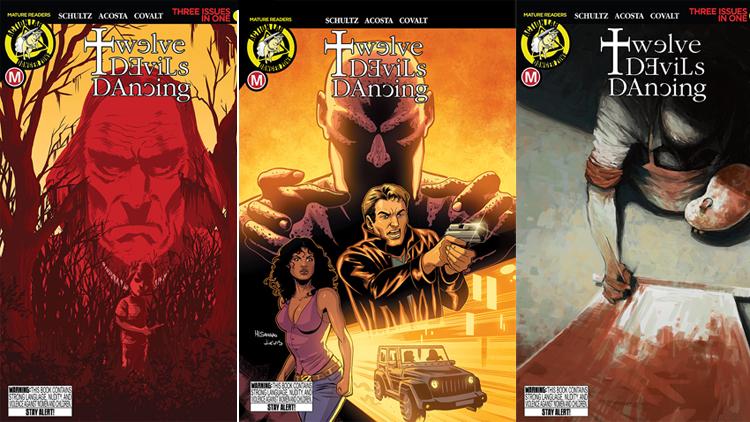 Twelve Devils Dancing, by writer Erica (Charmed, Xena, M3) Schultz, penciller Dave (Swords of Sorrow, Doc Savage) Acosta and colourist Andrew (Courage the Cowardly Dog) Covalt is absolutely worth picking up if you dive into every new police procedural on TV, and love the likes of Hannibal, Se7en and the Lincoln Rhyme books. While the title and Volume 1 cover of this comic may suggest supernatural horror, the reality is a highly cinematic battle of wits between a serial killer and FBI agent.

Published under the no-holds-barred Action Lab Danger Zone imprint, Twelve Devils Dancing pits medically retired Special Agent Callum Cooper against the Crypto-Killer, a serial killer who resurges after three years just as the wrong man is about to be executed for his atrocities. Without the resources of the FBI, Callum is forced to hunt down the Crypto-Killer on his own, although he does have the assistance of razor-sharp Aisha Miller, a disgraced-forensics-student-turned-bartender. Aisha may or may not be a Crypto-Killer target, selected to taunt and further stress Callum, but she comes with as many personal demons as her new inadvertent partner.

The synopsis for Twelve Devils Dancing may sound generic, but the book distinguishes itself fairly easily thanks to its well-scoped and well-written characters. And, well, “straight” serial killer tales in comics (as opposed to being embedded in superhero and supernatural fare) don’t come out that often. 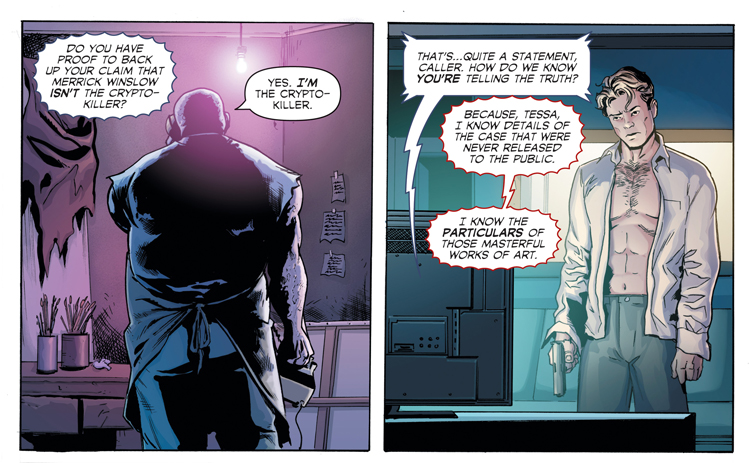 There’s no question that Twelve Devils Dancing is dark and sordid. This is definitely a book for mature readers only, and it contains a trigger warning on its cover about adult content. There’s no shying away from the crimes of the Crypto-Killer, which centre on the degradation and torture of women. Acosta’s pencils and Covalt’s ruddy colour palette make your skin crawl in these moments, and the Issue 5 cover by Michael Montenat becomes more disturbing the longer you look at it.

At the same time, though, the darkness is offset by the banter between Callum and Aisha – and the tonal shift in these exchanges is welcome, never jarring. Aisha is especially and enjoyably smart-mouthed while Callum, when he isn’t in obsessive detective mode, is warm-hearted, charming and just a little bit of a rogue. Some of the best moments in the book are the quiet downtime conversations between the two mismatched protagonists: the vaping, fast-quipping Millennial and the older male authority figure, who come with their own very different frames of reference.

Twelve Devils Dancing definitely deserves credit for its broadening of the representational spectrum. Because here’s the thing: without it being a heavy-handed story point, Callum is gay and Aisha is black. That’s not a hero pairing you see regularly in any entertainment medium, and it’s a welcome refresh of the crime drama status quo. 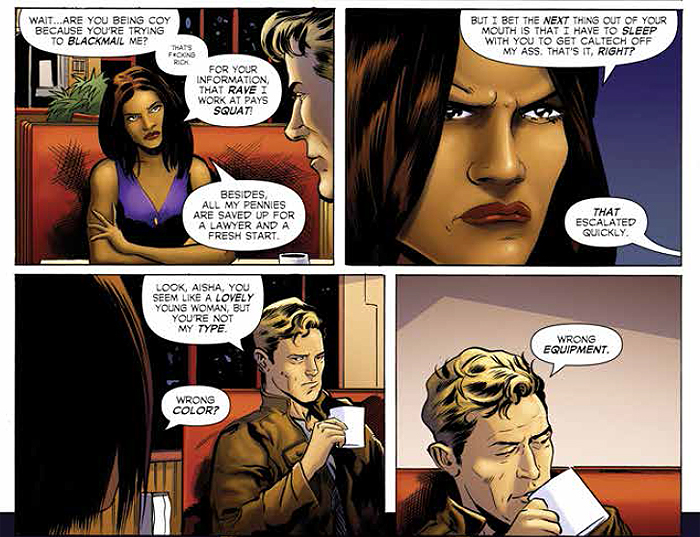 The only major gripe that can be made about Twelve Devils Dancing is that it feels a little too condensed. What began five years ago as a concept for a two-season TV series was reimagined as a 20-to-30-issue comic run, only to be further pared down to six issues due to financial constraints. The end result is a self-contained story released in two wallet-friendly volumes, consisting of three issues each. That’s it. Get both volumes for a grand total of USD6 on Comixology and you have the complete tale – a rarity these days.

That’s to be appreciated, but at the same time you want more, of both the unusual but adorable friendship between Callum and Aisha, as well as an exploration of the decidedly creepy Crypto-Killer and his warped psychology. There is a lot of meat to the characters and concept of Twelve Devils Dancing. In its current published form, though, it feels pared down to the leanest cut. And some of us relish a mouthful or two of juicy fat. Volume 2 is especially sinewy, trimming away most of the character development in Volume 1 as it races to serve up its surprise conclusion.

Still, better to be left wanting more than bored, and Twelve Devils Dancing refuses to let the reader disengage for a single second. It’s an engrossing, pitch-perfect balance of dark and light, and while it doesn’t break from genre convention, it certainly introduces some welcome new flavours to the mix. I just wanted more.

Volume 2 of Twelve Devils Dancing is out as of today, completing the story. You can buy the miniseries in its entirety here.

Just when you thought the subject of serial killers had been exhausted, along comes minise…