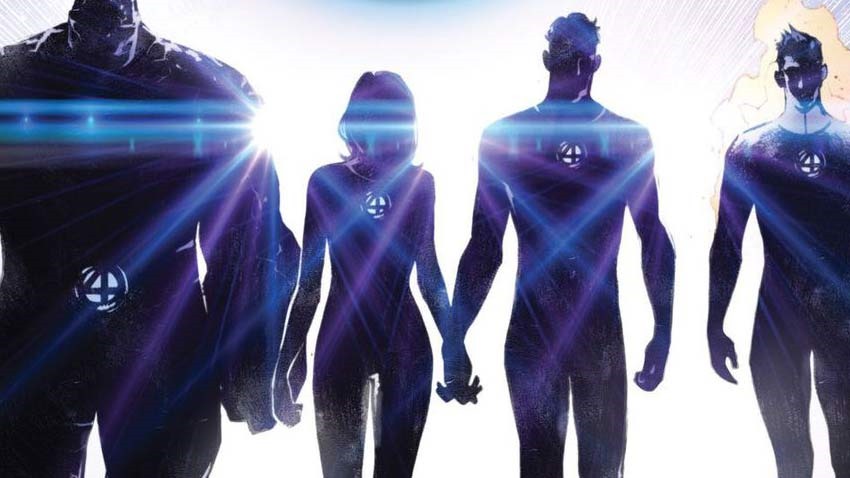 It’s official! Disney just bought a whole stack of the Marvel movie rights back from 20th Century FOX, in a deal that cost ludicrous amounts of cash. With various characters well on their way back to the house of mouse, there’s a certain sense of hope in the air that we’ll finally get a decent Fantastic Four movie out of the deal. After all, Marvel’s first family of explorers who regularly traverse the multiverse deserve to be incorporated into the massively successful Marvel Cinematic Universe.

They’re a cornerstone of the comic books that heroes such as Spider-Man, Captain America and Thor call home. They’re the spark that kicked off the fire of the Silver Age of comics, a team whose bonds were forged in space and cosmic radiation that made them more than human but never tempted them to use their abilities for anything other than altruistic purposes.

After several disastrous big screen attempts to translate that bond to the big screen, a push of the reset key is needed. So who would you cast in the roles of Mister Fantastic, the Invisible Woman, the Human Torch and The Thing? Which actors could give the Fantastic Four some overdue justice and see some clobberin’ time carried out at the box office? We have a few ideas… 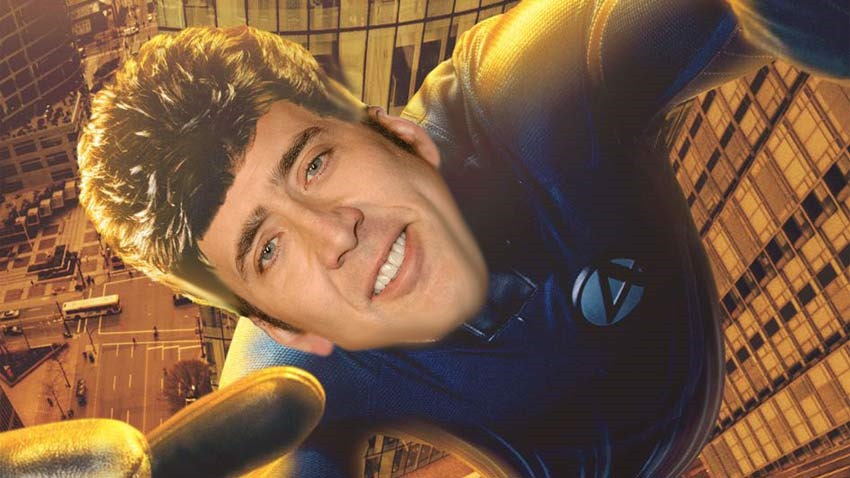 For Mister Fantastic, you need an actor that can bend his silver screen talents to the max. A man who is flexible, has an IQ that cannot be measured and also happens to be a great father. Hell, how does Nicolas Cage not suit that role? He was daddy of the year in Kickass (NOW SWITCH TO KRYPTONIIIIIIIITE), he’s had a few superhero tussles in the vastly underrated Ghost Rider movies and he played a genius with a taste for adventure in The Rock.

Perfect qualities, that all make for the Reed Richards that audiences deserve to see on the screen. You could say that it’s not too much of a stretch to see him suiting up. 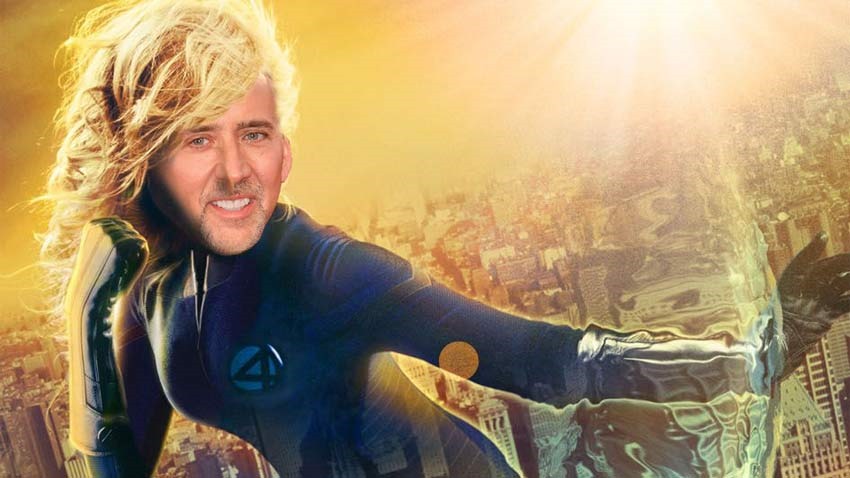 Confidence, care and Cage. The three perfect C’s that would result in the perfect Invisible Woman being seen on the big screen. While Jessica Alba’s Invisible Woman was a character whose entire premise boiled down to her shouting “Let’s” and then blasting enemies away with a wave of CGI farts, Nicolas Cage could be so much better.

For an actor who puts out roughly three hundred films a year so that he can cover the cost of his crippling dinosaur fossil addiction, Cage is an expert in lying low and staying under the radar. Basically, he’s already mastered the art of turning himself invisible, much like Drax did in Avengers: Infinity War. Somebody slap a blonde wig on Cage already. 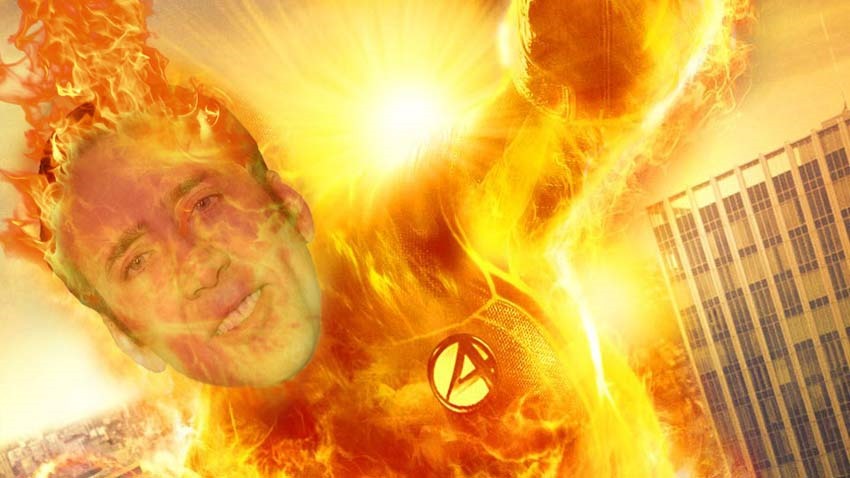 True story: For Ghost Rider, Nicolas Cage didn’t have to rely on something like CGI to transform into the spirit of vengeance. Every day, he’d willingly wash his face with petrol and set it on fire for all of his scenes, growing his flesh back by the next morning. I don’t have to prove this statement because I’m not under oath, but what I can do is provide the same clip of KRYPTONIIIIIIITE from above because I never get tired of seeing that scene from Kickass:

Anyway, I’m not saying that we should set Nicolas Cage on fire, because the man already has acting skills that are lit. Yo. 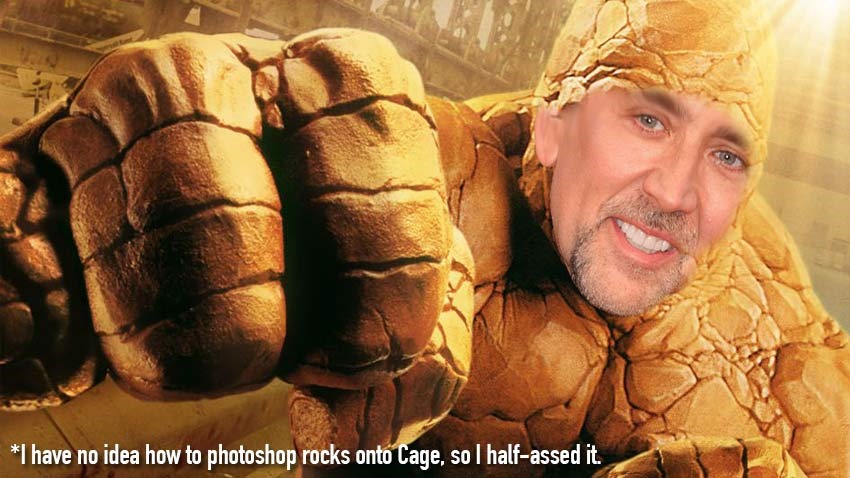 Some people say that seeing Michael Chiklis in a rubber suit is the lowest point of the Fantastic Four franchise history. I say that we can and should do better, and even if we had a budget of pennies, watching Nic Cage spout familiar one-liners while running around with bits of orange cardboard superglued to his skin would still be an Oscar-worthy performance.

Trust me folks, it would totally be clobberin’ time for Aunt Petunia’s favourite blue-eyed and ever-loving relative from Yancy Street if Industrial Light and Magic decided to dress the National Treasure thespian up in an entire mountain’s worth of rubble trouble CGI. 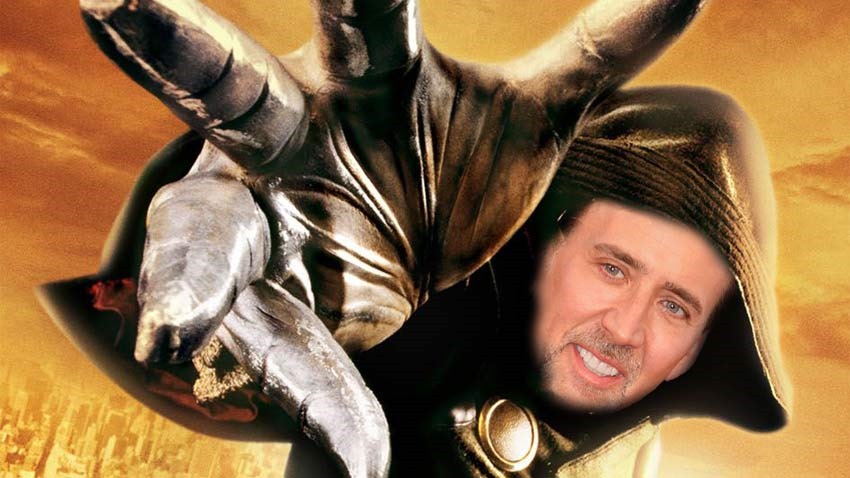 Shunned by society, his genius overlooked and clearly decades ahead of the curve…How is Nicolas Cage not Doctor Doom already? For a villain who has the might, intelligence and diplomatic immunity needed to match the power of Marvel’s first family, you need an antagonist who represents a danger that only a coordinated team of cosmic adventurers can stand against.

Nicolas Cage is that danger, Nicolas Cage is a menace whose sheer acting skills are so deadly that they could shake reality apart if they were left unchecked and unrestrained. We’re all alive by the sheer grace of Cage, our lord and saviour who saved that bunny in Con Air. That’s not a movie, that’s actually a true story made from documentary footage.

The point is, is that the idea of a Latverian super-scientist who happens to be cloaked in hatred, mysticism and an armour that was forged by an evil sect of reclusive anti-buddhists isn’t that far-fetched . After all, that’s the life that Cage currently leads as he plots his revenge on mankind for not making The Sorceror’s Apprentice the box office smash that it was supposed to be. 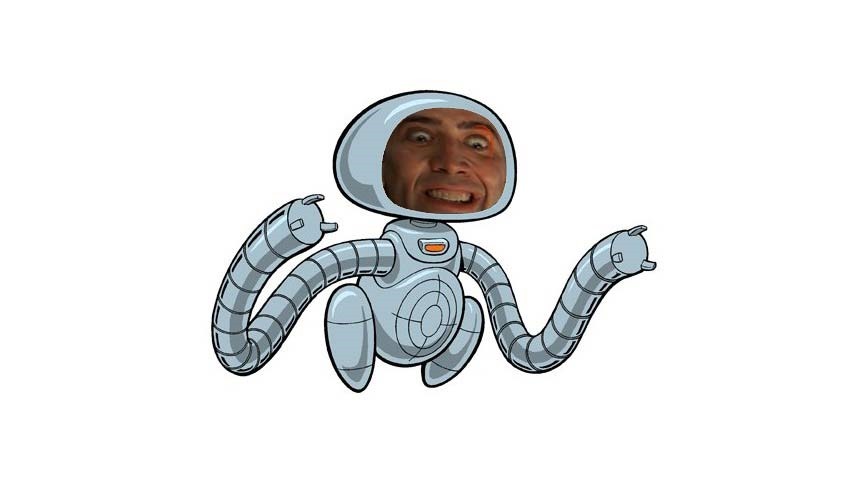 Was HERBIE the worst thing ever in the Fantastic Four cartoon, the Jar Jar Binks of the 1970s? Yes and yes dammit. But is HERBIE beyond redemption? Not when you have Snake Eyes legend Nicolas Cage voicing, motion-capturing piloting the wonderful action figure advert of tomorrow. And that’s our list! Do you have any ideas for actors who’d be better than Nicolas Cage in any of the roles above? Then shut up, because I don’t want to hear it and you know I’m right.