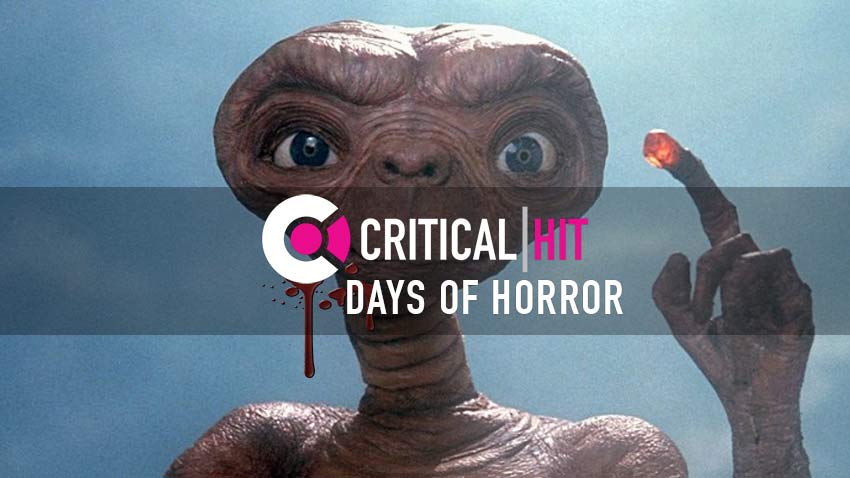 Welcome to Critical Hit’s 31 days of horror! It’s the month of spookiness, of frights and jump scares and we’re ready to celebrate! Over the decades, movies have managed to create eerie atmospheres, scenes of terror that can’t be contained within a single genre and we’re looking back at the films and the movie maniac moments that had us squirming in our seats.

THE MOVIE: E.T. THE EXTRATERRESTRIAL

E.T. needs no introduction. This Steven Spielberg classic not only made mega-bucks at the box office and became the highest grossing movie of all time when it released, but practically defined how kids movies should be made. It was also a story that broke the mould on how aliens were viewed and instead of giving us creatures that want to probe us and take over the world, it give us an alien with a strong connection to the children that cared for him and came to view him as one of their friends.

Reading all of this you might think I must really have a low scare limit, but the truth is that I actually enjoy the horror genre and can sit through most horror movies today without flinching. So, why has such a relatively unscary kids movie made the list? Well, consider that I was a little 5-year old when my parents first rented is on Betamax many years ago and up to that point, I had never really thought much about aliens. In fact, the end of the road was a little bit of a stretch for my imagination as all of a sudden hearing these noises and seeing glimpses of these strange creatures on the screen was a little too much for me and I ended up running to my bedroom, only to watch the rest of the movie another time when I was a little older.

Early in the movie the alien ships arrive on earth and we see our alien friends scurrying off to explore this newfound planet, only for them to get alerted to danger and needing to flee, accidentally leaving behind one of their own who now has to hide from the humans.

What makes this scene work so well is that you don’t actually see all that much of our alien friends. Spielberg makes use of a night setting and the rich foliage to hide the characters from us and leaves us guessing as to how they might look like. Needless to say though, those small long fingers are pretty frightening.  That we actually get to see very little is what makes this scene so intense. All we’re left with are those strange noises and our imagination.

It’s one of those perfect examples where sometimes holding back and keeping the mystery high often creates more tension than revealing your ‘monster’ early on. The epic score by John Williams only adds to the intensity as his use of lower string chords leaves you feeling uneasy.