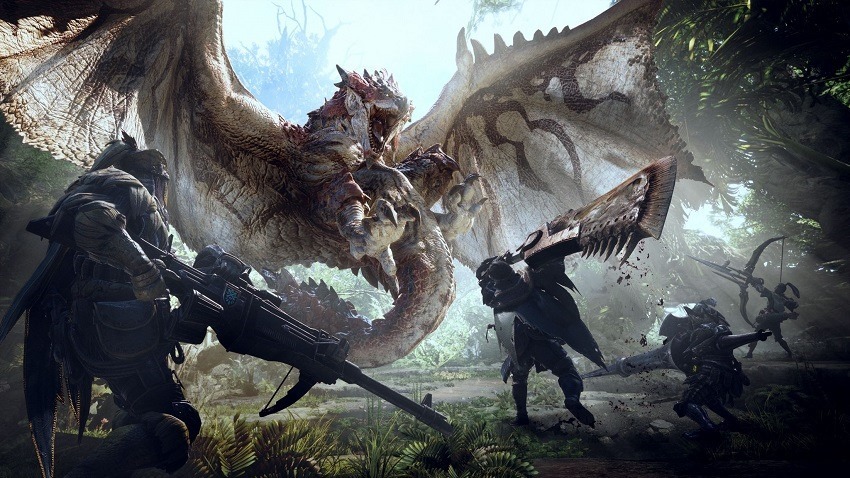 Milla Jovovich is currently in South Africa to fight monsters. No, she’s not pulling a Patricia DeLille and starting a political party to contest next year’s elections, but rather teaming up again with her Resident Evil franchise director (and husband) Paul W.S. Anderson for big-budget video game adaptation of Capcom’s hit game series, Monster Hunter. The production is currently filming up on the West Coast of the Western Cape and Jovovich and her co-stars – with the exception of martial arts superstar Tony Jaa – have been posting candid behind-the-scenes snaps of themselves on set. Seeing as how the Capcom action RPG series is set in a high fantasy world of swords and dragons, these pics puzzled some fans as they showed the cast dressed as normal modern-day soldiers, complete with automatic rifles.

However, IGN has now debuted the first official image from the film as well as it’s synopsis and things are now actually starting to make sense. (Click below to enlarge and check out the costumes in super high-res detail). 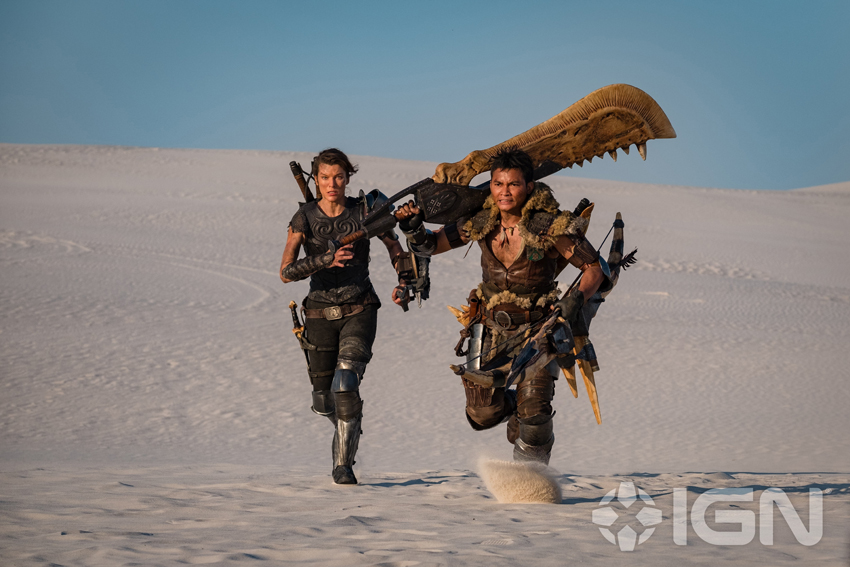 Behind our world, there is another: a world of dangerous and powerful monsters that rule their domain with deadly ferocity. When Lt. Artemis (Milla Jovovich) and her loyal soldiers are transported from our world to the new world, the unflappable lieutenant receives the shock of her life. In her desperate battle for survival against enormous enemies with incredible powers and unstoppable, revolting attacks, Artemis will team up with a mysterious man who has found a way to fight back.

While Jaa’s Hunter is actually modelled after the Field Team Leader from Monster Hunter World, the latest best-selling entry in the franchise, Jovovich’s Lt. Artemis is a completely new character. However, much like how Jaa is packing the Giant Jawblade and Great Hunter Bow from the games, Artemis’ look is also inspired by in-game elements. In particular, her look is a mismatched set of various weapons and armour pieces like the Dual Blades, Slinger and armour inspired by the Odagaron chest piece, just like players would do in-game as Anderson explained.

The beauty of the costumes and the landscapes from the Monster Hunter game really kind of came out in that image… She is the game player, in a way, she is the audience’s avatar, their way into the world.

Happy Halloween from Alpha Team, not in costume this year but in UNIFORM! We didn’t get to go trick or treating but it’s a real treat to work with these incredible people on #monsterhuntermovie @meagangood @diego @iammcjin

The pic was taken in the sand-dunes of Atlantis – that’s the real Western Cape community, not the mythical undersea city – which will double as the game’s Wildspire Wastes. So far all the set pics we’ve seen have also been from this area, but “long-term fan of the game” Anderson advised to expect much more environmental variety in the finished film as it will delve deep into the game’s mythology.

We’re going into a much more rocky landscapes as well, we’re getting out of the desert and going much more rocky. There’s a chunk of the movie that’s actually set underground as well, in terrifying caves. There’s a more lush part of the movie, which kind of reflects the kind of lush, more jungle-y look of the Monster Hunter world. And then the climax of the movie takes place around a piece of the Ancient Civilization that’s, it’s kind of referenced many times in the Monster Hunter games.

We’re going into a much more rocky landscapes as well, we’re getting out of the desert and going much more rocky. There’s a chunk of the movie that’s actually set underground as well, in terrifying caves,” Anderson said. “There’s a more lush part of the movie, which kind of reflects the kind of lush, more jungle-y look of the Monster Hunter world. And then the climax of the movie takes place around a piece of the Ancient Civilization that’s, it’s kind of referenced many times in the Monster Hunter games.

Captain Natalie Artemis. Ranger. Monster Hunter. Just a little peek for all the @monsterhunterworld fans out there who were worried the other day.? Here is Captain Artemis wearing a “slinger” on her arm. I will also post a pic at some point of some of the incredible MH weapons we’ve recreated for the film.?? #monsterhuntermovie #monsterhunterworld #tankwadiary

Speaking to /Film a week ago, Anderson also explained that besides for Artemis and her soldierly crew, you shouldn’t expect too many dramatic deviations in the movie, particularly when it comes to the game’s titular monsters and characters like The Admiral played by Ron Perlman.

I don’t need to create any new monsters. There’s such a vast array of amazing creatures over the years. We’re leaning quite heavily on the favorite creatures from Monster Hunter World which is the latest game, but we’re also bringing in what I think are some of the fabulous monsters from some of the earlier games [as] well, and some of the imagery from the earlier games.

There’s The Handler and Admiral, Aiden, Aiden’s Handler. We wanted Palico. It’s very much a movie of the video game, but in Monster Hunter you get to create your own character when you go in there. You don’t get to play Lara Croft or Jill Valentine. You get to play your own creation, and there is definitely an element of that in there. Some of the leading characters will be fresh characters but that’s a reflection of what the video game is.

While I eventually detested the Resident Evil movies as terrible slow-mo garbage that didn’t know when to end, they started off pretty great. If Anderson and Jovovich can recapture that magic, then along with the Monster Hunter franchise’s fan-favourite world, there may just be a fun movie in here.