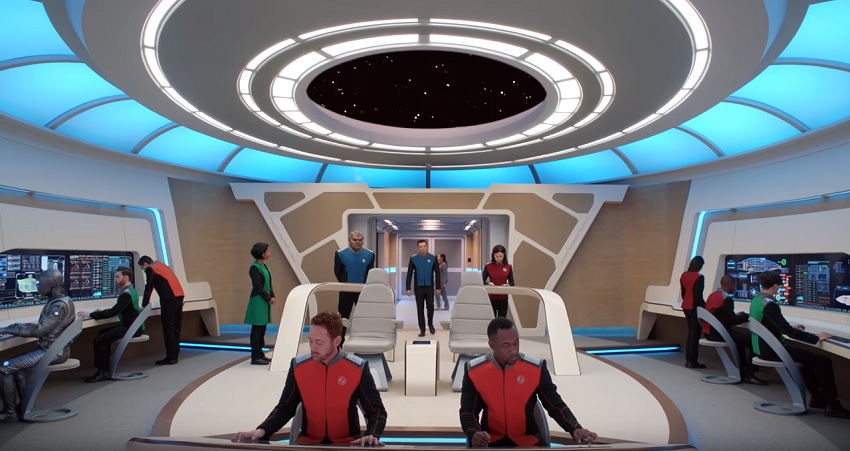 Who knows what’s happening with CBS’ troubled Star Trek reboot series, Star Trek Discovery, what with it losing its showrunner and being delayed a few times, and still having no release date nailed down. Fortunately Fox have stepped into the breach with The Orville. If by “stepping into the breach” I mean a sci-fi parody that mercilessly mocks everything about Star Trek. I can’t wait to see the (stupid) holodeck episodes. From the man who never sleeps, Seth MacFarlane (American Dad!, Family Guy, and many more), comes The Orville – a show that hasn’t seen a sci-fi trope it didn’t want to flip around on the audience and play for laughs.

The show’s official and incredibly detailed synopsis is as follows:

From Emmy Award-winning executive producer and creator Seth MacFarlane (FAMILY GUY, “Ted”) and directed by Jon Favreau (“The Jungle Book,” “Iron Man”), THE ORVILLE is a one-hour science fiction series set 400 years in the future that follows the adventures of the U.S.S. Orville, a mid-level exploratory vessel. Its crew, both human and alien, faces the wonders and dangers of outer space, while also dealing with the familiar, often humorous problems of regular people in a workplace…even though some of those people are from other planets, and the workplace is a faster-than-light spaceship.

In the 25th century, Earth is part of the Planetary Union, a far-reaching, advanced and mostly peaceful civilization with a fleet of 3,000 ships. Down on his luck after a bitter divorce, Planetary Union officer ED MERCER (MacFarlane) finally gets his chance to command one of these ships: the U.S.S. Orville. Determined to prove his worth and write a new chapter in his life, Ed finds that task all the more difficult when the First Officer assigned to his ship is his ex-wife, KELLY GRAYSON (Adrianne Palicki, “Agents of S.H.I.E.L.D.,” “Friday Night Lights”).

Somehow, Ed and Kelly must put the past behind them and, with the help of the crew, navigate fascinating and sometimes dangerous adventures in outer space, as well as the tumultuous and captivating day-to-day personal relationships with their colleagues.

While I appreciate MacFarlane’s work, I’m not the biggest fan of his style of humour which tends to be rather unsubtle and slapstick-ish – and that’s on full display here. However I think that style works very well in this case when compared to the source it’s trying to poke fun at, which can be quite staid at times. I chuckled aloud a few times while watching the above trailer, and that’s good enough for me to give this a try.

While there’s no exact date as yet, The Orville is due to being airing on Fox in the Fall, or for those of us in the Southern hemisphere, Spring.