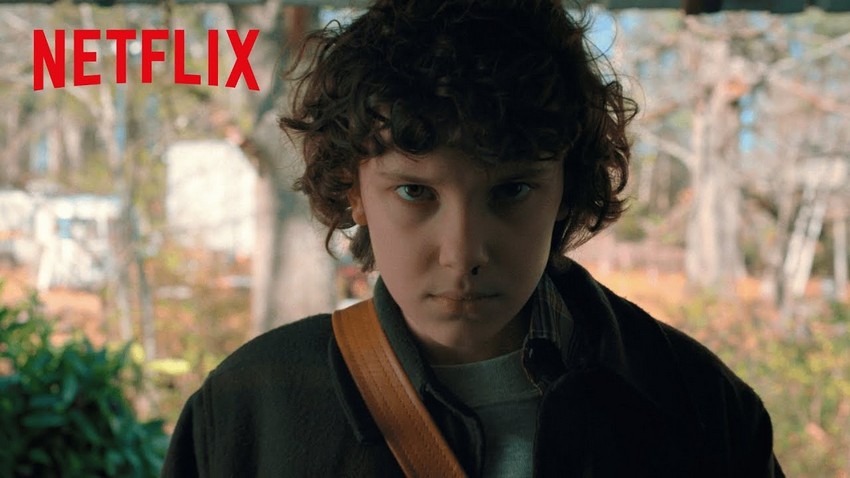 Following on from that cryptic teaser from the other day, Netflix has released the final trailer for the upcoming second season of their breakout series Stranger Things. And after watching this new trailer, I believe my reactions can best be summed up by a line from the trailer itself (only with a lot me feeling): OH MY GOD!

The kids going all Rambo alongside Sheriff Hopper! That incredible build-up of synth music! The creepy Lovecraftian monster in the shadows! Eleven’s Curly Sue hairstyle! Oh, be still my geeky heart! We still don’t know how Millie Bobby Brown’s superpowered Eleven makes it back from the Upside Down, but at least she appears to be eating well thanks to Hopper’s Eggo drop-offs. The rest of the gang also appear to be in fine form… Well, except for Will who it appears is experiencing some hectic side effects from his time being stuck in the Upside Down. Coughing up black gooey creatures was apparently the least of his worries. And it seems we now also have some new shady scientists who are clearly up to no good to deal with. Nothing a good ol’ kettie can’t fix, right?

Overall though, this trailer is just phenomenal. It is jammed packed with awesomeness, but doesn’t give away the entire plot. Mystery is a huge part of Stranger Things and it’s great that creators The Duffer Brothers are sticking to that. Right now my biggest concern is that it’s not already 27 October which is when the nine-episode second season will premiere on Netflix. That’s only two weeks away, but it feels like its three weeks too long.

Along with this new trailer, Netflix also posted a clip on Twitter earlier in the week that revealed the titles of the first six episodes in season two. As is true to Stranger Things, it’s all done in a very 80s style.

It’s 1984 and the citizens of Hawkins, Indiana are still reeling from the horrors of the demagorgon and the secrets of Hawkins Lab. Will Byers has been rescued from the Upside Down but a bigger, sinister entity still threatens those who survived.