Home Entertainment She-Ra and the Princesses of Power review: For the diversity of Gayskull

The Internet loves a good dollop of outrage. If it’s not a largely unified front against some evil or idiocy, the spotlight gets turned on whoever is loudest and angriest about some innocuous issue (the selling of cross-free hot cross buns or an all-female movie reboot, for example). This typically makes the frothy-mouthed indignation of these people seem more widespread than it really is. 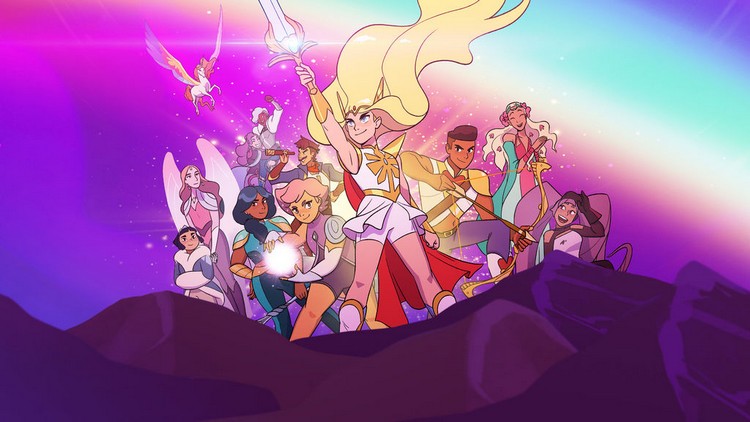 So back in July there was a lot of pointing and foot-stomping when the first images from Netflix’s upcoming She-Ra reboot were revealed, and fans of the original 80s cartoon reacted badly to the character redesigns. Hashtag Not My She-Ra. Fast-forward four months and it’s possible to confirm that, yup, the animated series is definitely not the She-Ra they remember. What it is, though, is a charming tale of courage, friendship and acceptance that invites in all viewers.

Conceptualised by Noelle Stevenson, the award-winning creator of comics Lumberjanes and Nimona, and produced by DreamWorks Animation Television, She-Ra and the Princesses of Power is very much in the vein of Avatar: The Last Airbender (more so than Korra), with some Steven Universe and Sailor Moon thrown in for good measure. That said, while parallels with predecessor cartoons are strong – sparkly crystals are everywhere, magical girls are key to the story, and the title and abilities of She-Ra are now passed down for centuries – the show is clearly on its own mission.

That mission? To stress there’s a place for everyone. 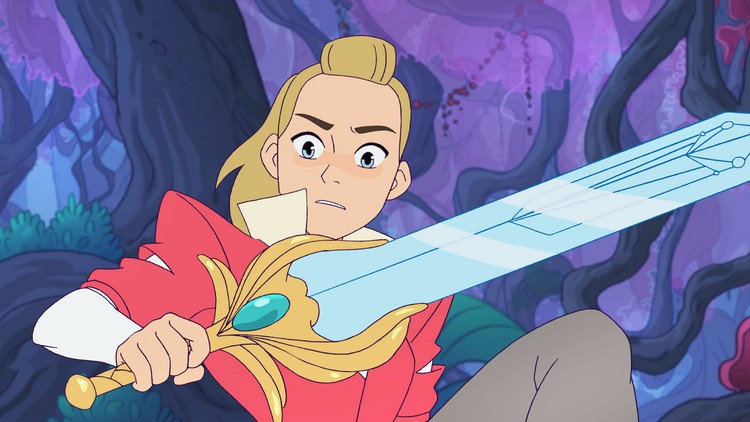 The story of She-Ra 2018 sticks to the outline of the 1985 original: raised by the grim and militant Horde, heroine Adora discovers a magical sword that turns her into She-Ra, a powerful protector of Eternia, the planet on which she lives. With her new abilities, Adora has her eyes opened to the devastation caused by the Horde, and aligns herself with the Rebellion hiding in the Whispering Woods. She-Ra’s responsibility is to return balance to Eternia – lost with the Horde’s invasion – and unite the planet’s powerful, magically-gifted princesses to fight back. Adora’s closest allies in this mission are teleporting princess Glimmer and archer Bow. Left behind at the Horde base are Catra, Adora’s best-friend-turned-nemesis, and dark sorceress Shadow Weaver, the closest figure Adora has to a mother.

No matter how fondly children of the 80s (and I’m one of them) think of the old She-Ra: Princess of Power, it’s honestly a show to be left safely shrouded in the mists of nostalgia. If you’re curious, you can watch 60+ episodes of the He-Man spinoff on Netflix, but be warned it hasn’t aged well. While realistic-looking, the animation is continually recycled, and it’s as stiff as the characters themselves. Despite a solid concept, and a Star Wars-inspired setting that mixed sci-fi and fantasy, the old She-Ra was as plastic as the action figures it was flogging. 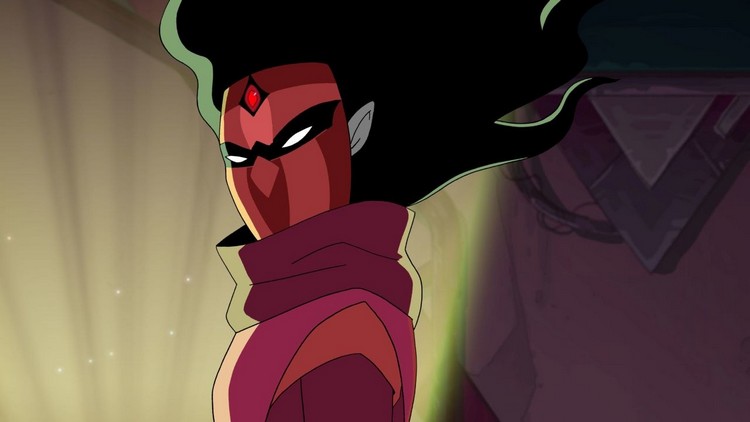 The new She-Ra, by contrast, is fleshed out, frequently comical and warm hearted. Adora and her friends, now 16 year olds, are far more real – struggling with insecurities, jealousies and frustrations. Much like Zuko in the Last Airbender, Catra is especially meaty as a character, teetering on the line between good and evil. Meanwhile, what little guidance Adora receives about her new role insists that she will be stronger alone; that love and friendship lead to self-absorption and are a dangerous distraction to the greater good.

Of course, the show resists this messaging. She-Ra and the Princesses of Power (notice the subtle title change?) is itself a rebellion. Much like Wonder Woman, She-Ra is a female power fantasy that casts off the male gaze and masculine norms in general. In fact, the show goes further than Wonder Woman in terms of re-assessing what is coded as heroic, and allows its characters to be unashamedly bright, colourful and girlie. If they want. 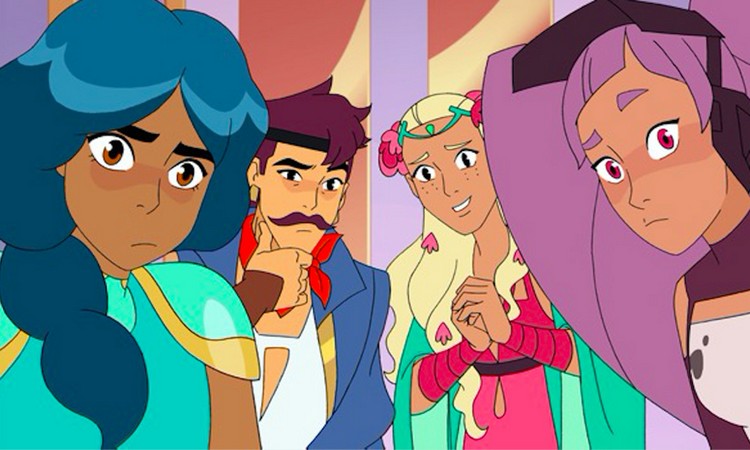 In the old She-Ra, the sparkles, pastels, fairy folk and cuteness felt like a calculated attempt to lure in girl viewers. With the new show, those aspects appear as choices and celebrations of alternate ways of being. It supports what is most striking about She-Ra and the Princesses of Power: its diversity in every department.

Eternia is not a black and white world. It’s a rainbow universe, literally at one point, with characters most powerful when they work side-by-side without attempting to mute their uniqueness. While never making a big deal about it (this is the Diversification Agenda done right), She-Ra and the Princesses of Power is jam-packed with a variety of body types, races, sexual orientations and unexpected personalities. For example, Zarya-lookalike Scorpia is a burly delight and she’s a member of the Horde. 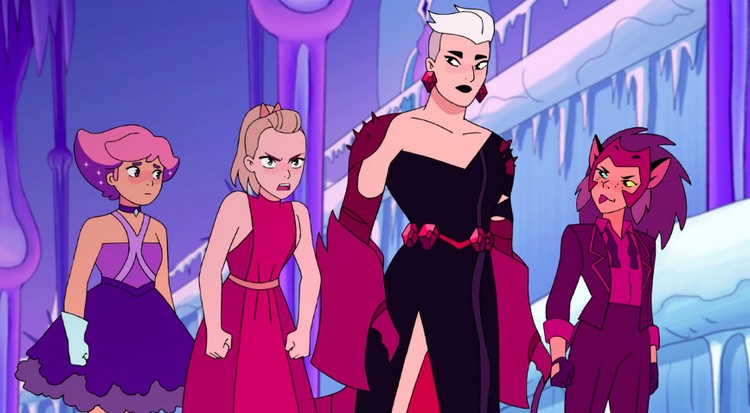 Meanwhile, although apex villain Hordak remains largely in the background of Season 1, She-Ra’s other significant male characters, Bow and Sea Hawk, are not conventionally male at all. They make major contributions to the efforts of the Rebellion but they’re in touch with their feelings, flamboyant, cheerful and optimistic. The Sokka-esque Bow is the antithesis of toxic masculinity.

For the record, in this universe of powerful women, none are reskinned Barbies running around in skimpy outfits and high heels, or are sexualised in the conventional sense. I say in a conventional sense because the handling of Adora and Catra’s relationship is pure Tumblr-minded entertainment. There’s no need to write fan fiction shipping the pair because the frenemy tension between the two is already dialled right up on screen. And FYI, the show does actually have an unveiled LGBT couple in it already, in the form of two minor supporting characters. 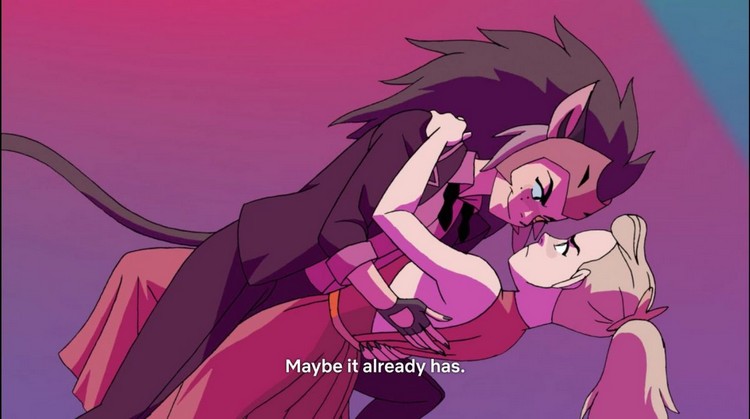 It’s also worth noting from a story perspective that while Eternia and Grayskull are mentioned, Season 1 of She-Ra and the Princesses of Power makes no mention of He-Man. Adora is a heroine in her own right, without having to sit in the shadow of a more powerful and famous male character.

Speaking of story, most of She-Ra Season 1 takes the form of loosely connected episodes that introduce fan-favourite characters from the original show like Madam Razz and Swift Wind in their reimagined form. From around Episode 8, though, the remaining 5 episodes form part of a single arc – which looks at times like it’s going to turn darker than it ever actually does. Perhaps it will in future seasons. 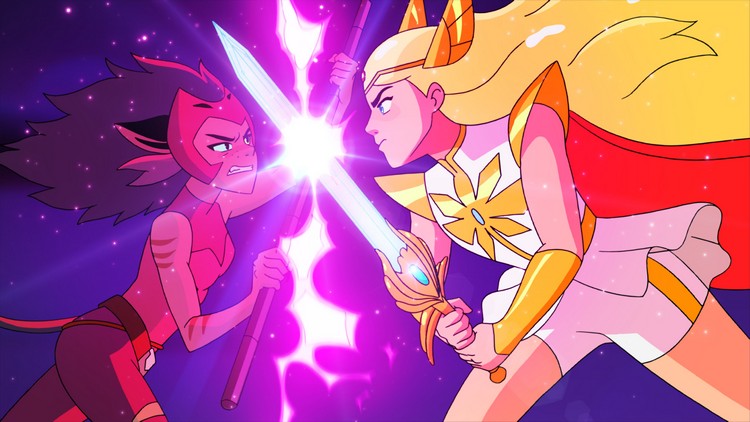 The only real gripes that can be made about the new She-Ra is that the plot strains credibility in a few areas – why do the adults just sit on their thrones, leaving the war to teenage commanders? – and an inconsistent, stripped-down animation style. Much like the original, the reboot avoids the depiction of Lord of the Rings-scale battles, keeping its scope limited to a dozen characters at a time, if that, because evidently that’s all the animators have capacity for.

She-Ra is also repeatedly described as an 8-foot-tall, muscled warrior woman, and yet that sense of scale is rarely conveyed post-transformation. Personally, while I loved the relooked Shadow Weaver design, I remain not entirely sold on She-Ra’s new look. This said, it certainly is rule-breaking, with the heroine appearing both feminine and masculine-coded at the same time. 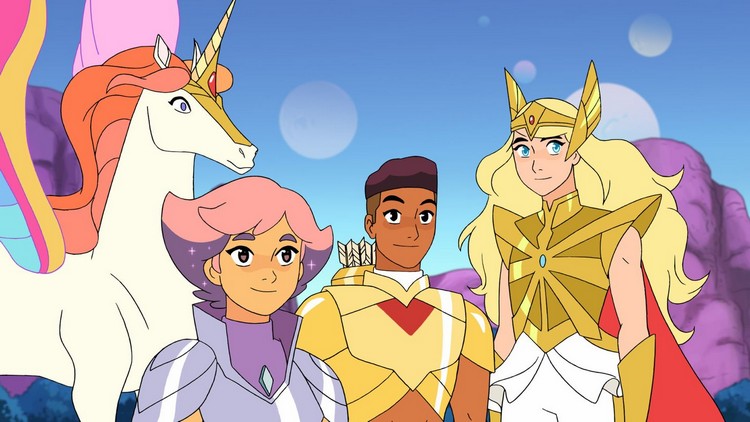 She-Ra and the Princesses of Power is immensely likeable, and everyone is sure to have their favourite norm-defying character. But more than being fun and entertaining, there’s the show’s overarching importance. While a conservative crackdown on all alternative ways of being is under way in real life, here’s a cartoon of all things that is queer, proud and waving its rainbow flag more vigorously than anything else. The Rebellion is animated.