[WARNING: THIS ARTICLE CONTAINS SPOILERS FOR THE FINAL SEASON OF STAR WARS REBELS] 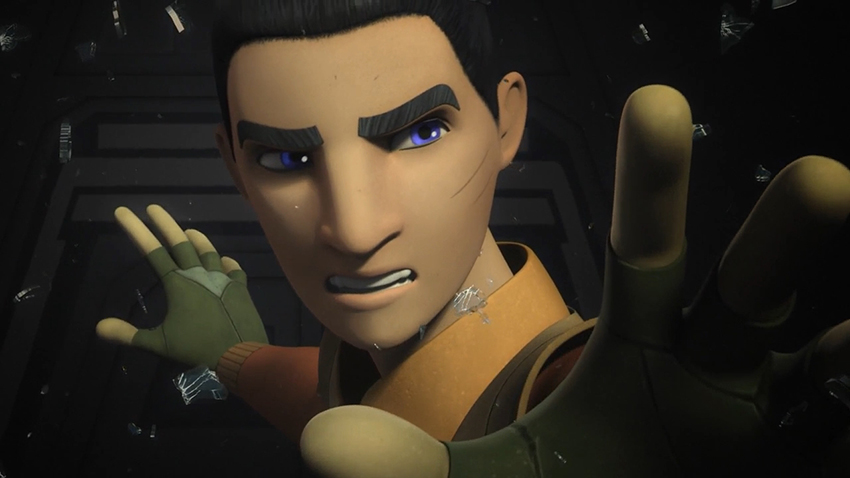 Last week the best Star Wars story of the Disney era finally ended. Yes, you read that correctly. Star Wars Rebels debuted back in 2014 and didn’t exactly look promising. The animated Disney XD show followed in the footsteps of the amazing Star Wars: Clone Wars series and initially just looked like an inferior followup that might be pandering to kids. Oh boy was that premature appraisal proven wrong.

Over the course of four seasons, creator Dave Filoni and his team spun out an amazing tale which bridged the gap between the Star Wars Prequels and the Original Trilogy as we followed Kanan Jarrus, the last remaining Padawan now all grown up, as he took on an apprentice of his own in upstart Ezra Bridger. The reluctant master and student found themselves entrenched in a resistance group with Twi’lek pilot Hera Syndulla, artistic Mandalorian fighter Sabine Wren, brutish Zeb Orrelios (the last of his species), veteran clone trooper Rex and acerbic droid C1-1OP aka Chopper. Initially just brought together aboard the freighter ship Ghost to help Ezra free his home planet of Lothal from Imperial rule, this motley crew would eventually become some of the founders of the larger Rebel faction opposing the Empire and the ruthless Emperor Palpatine.

Along the way we watched Ezra grow up from hot-headed kid to a mature Jedi Knight while Kanan would become the Jedi Master he never had – eventually sacrificing his own life in heartbreaking fashion to save the people who had become his family. It was a feat that Ezra would copy just a few episodes later as he sacrificed himself in the show’s finale as well to save Lothal. Well, kind of. Calling in the Purrgils (giant space-whales) to assist in finally ridding his homeworld of the vicious Grand Admiral Thrawn and all Imperial forces once and for all, Ezra would zip off with them and the captive Thrawn into hyperspace to an unknown destination. 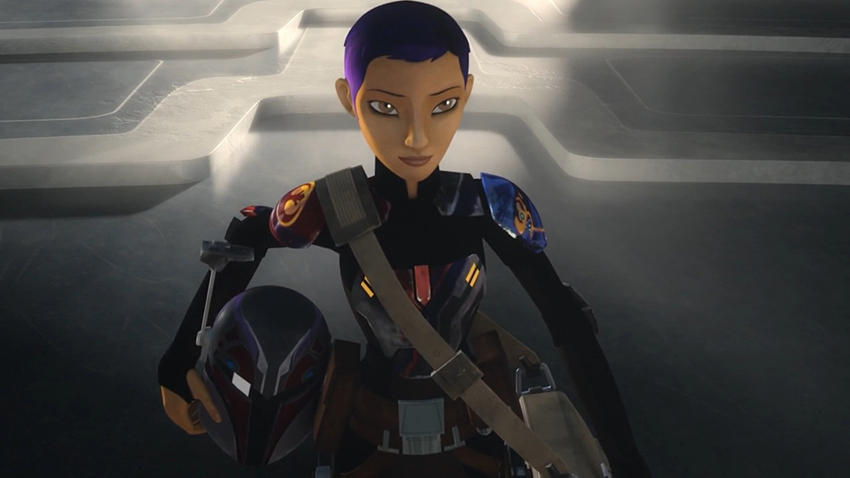 Since we knew that neither Kanan nor Ezra would be around by the time of the events in Star Wars: A New Hope, it was always expected that something dramatic would happen to them. After Kanan’s death, it appeared that Ezra would also be meeting his end, however Filoni took a much more hopeful course.

In the finale’s closing moments, we get a flash-forward to after the events of the Original Trilogy and see a more grown-up Sabine about a decade later still living on Lothal. With Ezra’s final words to her (“I’m counting on you”) still registering in her thoughts, she’s visited in a surprising twist by a much older looking Ahsoka Tano – the fan-favourite Clone Wars character who was once the Padawan of Anakin Skywalker before he became Darth Vader – and together the two set out to discover exactly what happened to Ezra. It was an incredible little wrap-up on the series, and Filoni explained to i09 how he came up with it.

The difficult thing is there is so much story after the end of this part of the story. And I wanted people to understand, once they overthrew the Empire, there were expectations of a large battle that never happened because basically our story ends and then Scarif and the whole Luke Skywalker thing happens. When Luke happens, the Emperor’s attention is completely refocused… His fear of Luke Skywalker drives his attention away from Lothal so those people end up benefiting in the end. It was all a matter of timing, but I wanted to get to the part of the story that you understood the happy ending.

So many people were obsessed with everybody dying [on this show]. I was really bewildered by it because I’ve seen the original trilogy of Star Wars that people like so much and it’s not like a death count type of movie. It’s a rather positive outcome, which I enjoy. I’ve always felt the best stories end and other stories begin and there’s no better way than to take two of my favorite characters and have them ride off into the sunset like I’ve seen in cowboy movies and Indiana Jones. And you just wonder, “What do they get to do? “I always like that in stories. One thing ends another begins, the story continues and that’s a saga. 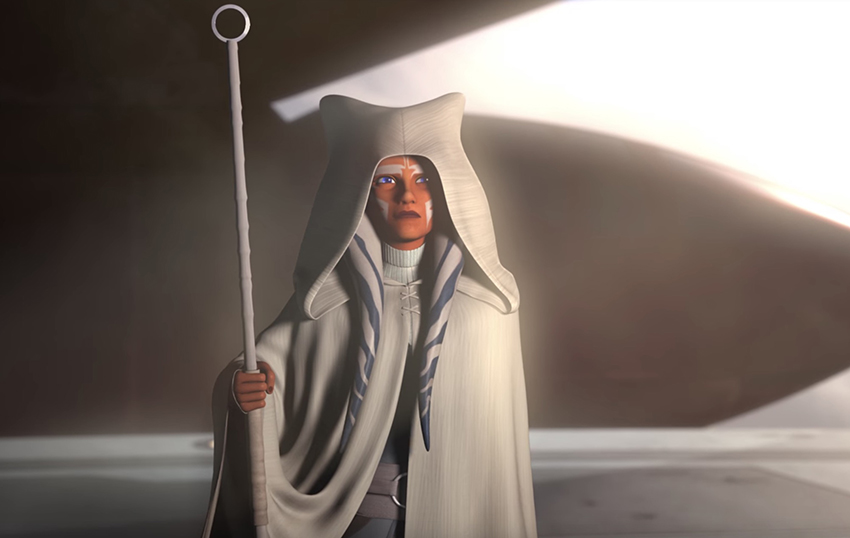 Before this moment, we had last seen Ahsoka in season two, as she engaged in a lightsaber duel with Darth Vader, her fate unknown. In the mythology-altering fourth season episode World Between Worlds however, Ezra discovers that within the Force there exists a dimension of sorts which can be used to connect to different points throughout all of space-time. Using the gateways in this place, Ezra plucks Ahsoka out of the past just as she’s about to be killed by Vader. However, when the Emperor learns of the existence of these gateways it causes Ezra and Sabine to flee, with Ezra closing the entrance to this dimension while Ahsoka exists through another gateway depositing her in an unknown time and place.

Just where has she been and what has she been up to before showing up to Sabine a decade later? Filoni isn’t saying, but he did indicate that Ahsoka’s look, complete with a flowing robe and mysterious staff, was all very carefully planned, as he explained to i09 in another interview.

I get a lot of requests to release designs so that people can make costumes and I’m always very in favor of that. Except this time. [Ahsoka’s new outfit] is the only one I’m not going to release to the public at this point. So that mystery is going to be a mystery for a bit.

I designed it a certain way with [art director] Kilian Plunket. People are already trying to guess ‘Is it just a staff? Is it some kind of saber staff?’ That would be exciting. We’ll have to see. But the image of her, everything about it was important. Even the inclination of her head, where her jawline was. Everything about that moment. So I think it carried off the way it was intended and we’ll have to see.

Her entire look is important. It’s very important. It’s specific to her journey prior to seeing her at the end of Rebels. But I won’t go into much more detail about that because, in my mind, some of those things, while I understand the general path of it, I don’t understand the specific details as of yet — because I haven’t had to think about it in detail yet. And I don’t want to lock myself into promising the audience something if I later go into those things and explore. 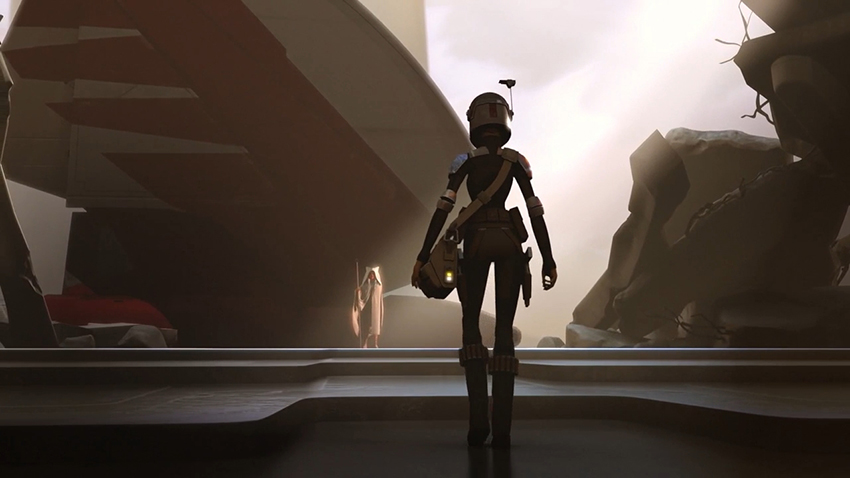 As for the further adventures of Ahsoka and Sabine, it would seem obvious that this would be the basis of a new show. Filoni has already hinted recently that he’s already working on something (which will probably debut on Disney’s new streaming service next year), however he wouldn’t confirm to IndieWire that this is what the show would be about.

Obviously it’s intriguing. It would probably make a good story. There are so many stories to tell. I’ve been so busy finishing this story to think of another one while I’m doing that… I have this crazy thing: I have to know what the story is about before I tell it.

And now comes the part of the article where we start getting theoretical. For a while now there’s been a crazy theory among some fans that Ezra Bridger would eventually grow up to become Supreme Leader Snoke, the mysterious and powerful leader of The First Order introduced in The Force Awakens and most recently killed off so unceremoniously by Kylo Ren in The Last Jedi. As we recently learned though, Snoke was a powerful Force wielder who was around during the events of the Original Trilogy but kept himself hidden as he discovered brand new aspects of the Force out in the Unknown Regions of the galaxy. And now, instead of dying like many suspected he would (which would blow apart this theory), Ezra hyperspaced off with the Purrgils to what we can only suspect is the Unknown Regions as well. Hmmmm. 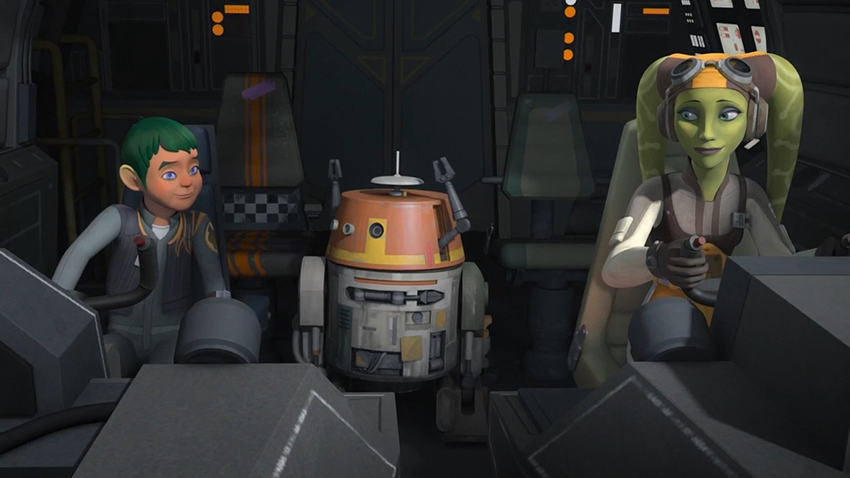 Besides for that wild theory, there was also a nice Easter egg planted in the series finale for long-time Star Wars fans. During the flashforward, along with checking in with Sabine, we learn the fates of the other crewmembers of the Ghost. Zeb finally finds peace with his people, while Hera and clone trooper Rex would go on to fight in some of the Original Trilogy’s biggest battles (we see the Ghost in Rogue One at the Battle of Scarif and a “General Syndulla” is called for over the PA system at the Rebel base, while a Rebel fighter who looks just like Rex can be seen during the Battle of Endor in Return of the Jedi). More importantly for Hera though, is that it turns out she had conceived a child with Kanan before his death, and we see this young boy with her on the Ghost now.

Though Sabine’s voice-over doesn’t name him, the credits reveal him to be Jacen Syndulla. That spelling is very important, as in the now-defunct Extended Universe books Jacen and Jaina were the names of the twin children of Han Solo and Princess Leia Organa. The new movies borrowed lots from Jacen and Jaina, giving Rey many of her characteristics while Kylo Ren aka Ben Solo is very close to Jacen in that he too was trained by his uncle Luke Skywalker as a Jedi, only to succumb to the Dark Side. This new Jacen looks far too cute to eventually turn into the Sith Lord Darth Cadeus who would slaughter his own family and commit countless atrocities as he tries to rule the galaxy himself, right? RIGHT?