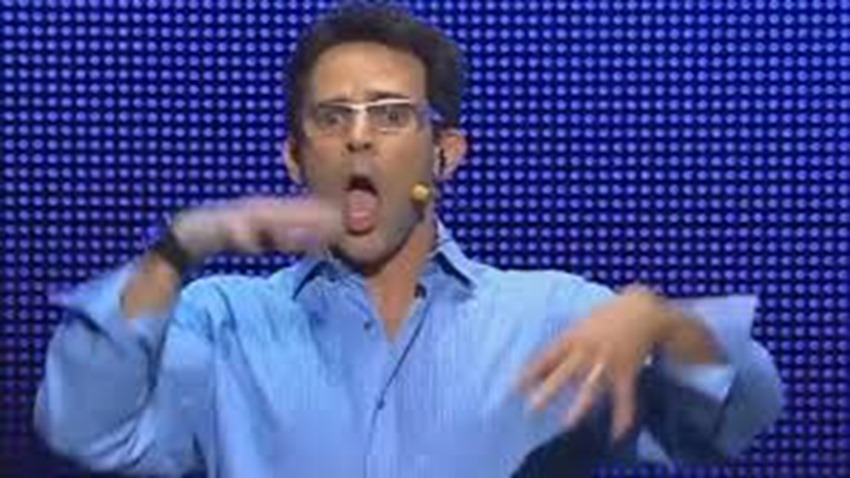 By now, we’re all aware of exactly what to expect from E3. The days leading up to the show are now an extended sizzle reel of what to expect, as developers host press conferences and hawk their wares. Which is great! There’s no harm in tempering your expectations, but sitting back and enjoying the show at that particular moment in time is always fun.

Unless…something goes wrong. While the E3 of today is a tightly tuned beast of rehearsals and scripted moments, the E3s of the past were a bit more dynamic. That led to more than a few scenarios that were cringe-worthy to say the least. Events that went off script, crashed and burned. We’re a big fan of those awkward moments, so here’s a look back at E3’s best and worst blunders.

Ubisoft’s E3 press conferences tend to be…weird. Weird in a delightful way usually, as Aisha Tyler is a national treasure and seeing Ubiboss Yves Guillemot team up with Nintendo’s legendary Shigeru Miyamoto last year was wonderful. Then there are the Ubisoft conferences that are simply painful to watch. They’re the equivalent of finding your old MySpace photos lurking online, awkwardness ramped up to 11 and unbearably strange.

Elements which were concentrated into the human vessel known as Aaron Priceman back in 2011 and saw a dark new entity born. A creature of flailing pantomime and wild gestures that made Italy look tame in comparison. Say hello, to Mr Caffeine:

Fun fact: You can achieve the same “doodleedoodledoooo” effect by pushing your thumbs into your eyeballs really hard. I’m not saying that you should do that, but it’s certainly something that I considered doing after watching that clip above.

Just about everything at the Konami 2010 press conference

Listen, I love game developers. They’re wonderful people, they work excruciatingly long hours to make fantastic games and they’re driven by passion. On that note, they’re also kind of not the best people to throw out onto a stage in front of thousands of people who watch their every move and at least a million more folks online who flood a livestream with the most inane jokes possible.

Now imagine that problem, compounded by language barriers and a lack of crowd control training when delivering a pitch about an upcoming game. That’s exactly what happened back in 2010 when Konami had their own press conference, trotting out developer such as . Tak Fuji, Naoki Maeda, and Thomas Nagano to sell their games using nothing more than buzzwords.

If Uwe Boll directed an E3 press conference, it wouldn’t be nearly as bad as the Konami catastrophe, which launched a thousand ships of memes in the wake of its cringe-heavy event.

Actors are not cheap. Actors who make actual bank at the box office and have a high stock? Man, you’re going to pay a fortune to have those thespians come out and front your game for you, and you don’t even know if you’re going to be getting a proper performance in the bargain. That’s the situation that EA found themselves in back in 2016 when they hired Jamie Foxx and Zac Efron to pretend to be enthusiastic for Battlefield 1.

Whether it was Jaime Foxx providing one-word answers to a host who was desperately trying to dig some enthusiasm out of the actor, or the highly paid duo apparently having no idea what they were supposed to be selling even, EA’s investment didn’t exactly look sound. Still, it could have been worse, something that Activision learnt several years ago when they hired…

July 11, 2007. A day that will forever live on in infamy for Activision as the company decided to hire a comedian to help spread some laughter and joy during their E3 press conference. Unfortunately, nobody was available, so they hired Jaime Kennedy instead. He who ruined The Mask with a sequel that should have been jettisoned into the Phantom Zone.

He whose candid camera antics were about as much fun to watch as getting a job in the zoo where your primary job was to keep baboon asses moisturised. That on its own was bad enough, but Kennedy’s absolute lack of charm, grace and humour resulted in a show where the easiest anti-jokes possible rolled out of his mouth and didn’t just lower the bar for comedy, it kicked it in the face and buried it sex feet under.

Imagine this: You’ve got a new console, it’s bound to be a license to print money and you don’t even have to say anything when you’re on stage. Honestly, you could just whip the cloth off the unit, point at it and take a bow. Easy. Unfortunately, Sony’s PlayStation 3 reveal was anything but easy. On stage with thousands of eyes on him, Sony’s Kazuo Hirai’s “RIIIIIIIIDGE RACER!” line became meme-history while a demo for Genji: Days of the Blade saw the birth of a brilliant line that was delivered with perfect timing.

Explaining to the audience how Genji: Days of the Blade would deliver authentic battles from Japanese history, producer Bill Ritch immediately loaded up the game and faced off against a giant enemy crab. Like I said, timing is everything in comedy and Ritch’s delivery of “So, here is this giant enemy crab,” was utter perfection.

Sometimes the most memorable moments aren’t hour-long presentations with fumbling hosts who can barely stutter a line out about how great their product is. Sometimes, the best of the worst can be found in a single moment, that finds itself stretched out and recorded for all eternity.That’s exactly what happened in 2009 when Kinect creative director Kudo Tsunoda took to the stage and demoed the body-tracking potential of the Microsoft Kinect, showing off an avatar who mimiced his every movement.

I might have missed something though, because when Tsunoda wanted to show off what his Avatar’s shoe looked like underneath, his digital likeness decided to engage in some spine-ripping yoga instead. “Bam! There it is!” Tsunoda shouted, blissfully unaware for a few seconds as to why the crowd was laughing. Fortunately, Microsoft would never ever have an awkward E3 Kinect moment ever again. Nope, no sir that was a one-time fluke.

I’m going to let you in on a secret: Most video game journalists are usually a bunch of white guys whose tolerance for bullcrap sits at between zero and f***all. While your usual E3 audience might have a more excitable crowd within a venue, 2011’s assemblage of writers and bloggers were a more curmudgeonly lot who didn’t give much of a toss about seeing paid child actors pantomime enthusiasm for malfunctioning Kinect hardware.

It was awful stuff, sugar-coated bluster that wasn’t selling anyone on what the Kinect was(n’t) capable of as everyone inside the venue begged for the sweet release of death.

Imagine you can act. Imagine you know exactly what the job is that you’ve been hired for, and you’re ready to give it your all. Something that Community’s Joel McHale seemed capable of, when he hosted the Ubisoft 2010 E3 press conference. Everything was going smoothly, with the French developer showing off some neat games that were both big and small…and then Battle Tag happened.

McHale may have tried his damndest to sell the game, but being roped into donning the peripherals and pretending to have fun was something that not even an actor of his calibre could feign enthusiasm in as Ubisoft’s attempt at selling their brand of Laser Tag battles never saw the light of day outside of a few test markets.

The Xbox One at E3

Today marks the 5 year anniversary of Sony’s best ever press conference: the Xbox One reveal event.

He’s not wrong! 2013’s E3 event for the Xbox One was disastrous to say the least. A million jokes were launched at Don Mattrick’s expense, all saying that the Xbox One should have been named the Xbox 180 because it did a complete about-face turn on the progress that the previous Xbox 360 console had made in the market. Instead of a fantastic update to the Xbox 360 that offered a strong library with better visuals, Microsoft sold the device as an all-encompassing media hub that could do everything.

Like TV. And more TV. Even more TV. Microsoft’s message was confusing, poorly delivered and went down like the Hindenberg at a fireworks convention as fans revolted against the ideas of always-online connectivity, limited game-sharing and the omnipresent Kinect feature. The current Xbox One is a hell of a lot better than it was in 2013 thanks to Xboss Phil Spencer finding the right focus for the console, but for a time it looked as if the Xbox One was going to be its own worst enemy.

Which meant free advertising for Sony when they threw some shade at their rivals:

There’s a reason why Nintendo prefers to do their annual Direct announcements now, instead of renting out a hall to show off their wares before E3 starts properly. That reason, is called Wii Music. Back in 2008, Nintendo tried to put on a live music show using their Wii console and Wii Music, going so far as to hire DJ Ravi Drums to beat out some rhythm using the dodgy software.

It was…really not good. Ravi looked like he was having a seizure, the all-important audio was deafening in its mediocrity and even Shigeru Miyamoto looked painfully aware of just how far south the live demo was going. 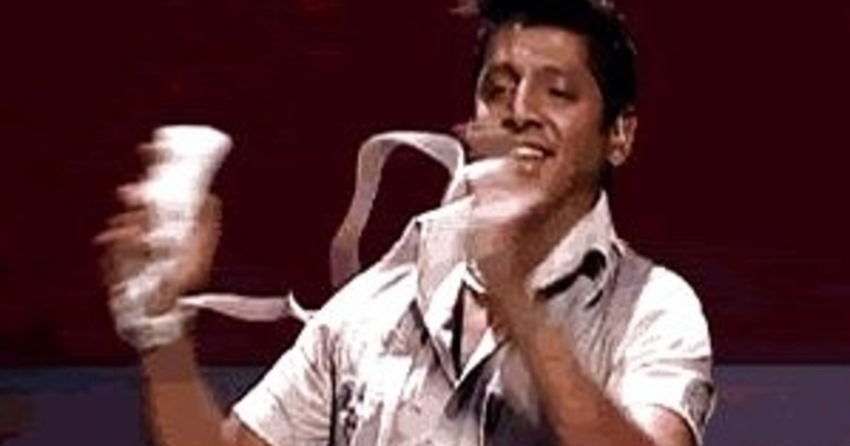