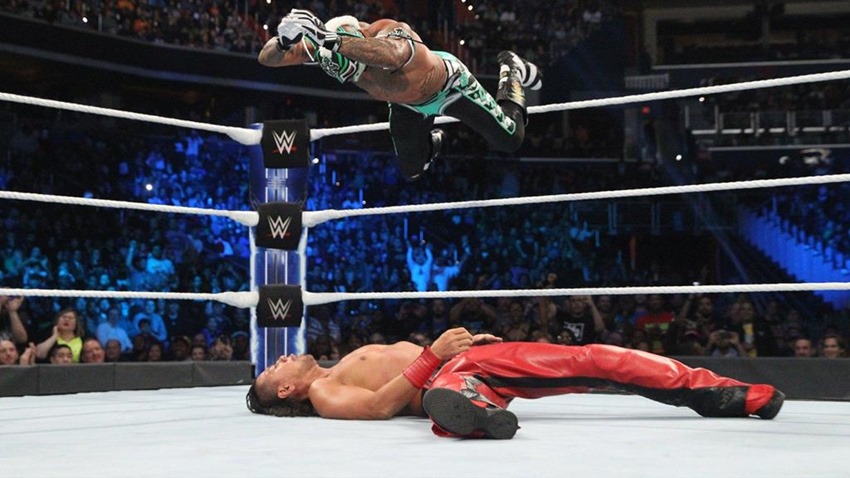 Smackdown LIVE celebrated a thousand episodes on the air from the Capital One Arena in Washington, DC. Here’s all the action and celebrations that went down last night.

Mr. McMahon made a surprise appearance during “Truth TV”

After a thousand episodes, Smackdown LIVE had earned the right to celebrate a historic achievement. Kicking off the party, R-Truth and Carmella managed to wrangle the McMahon family into the ring, and while Shane and Stephanie might have had some back and forth going between them to decide which WWE show was truly superior, their father Vince McMahon had a better idea for the night ahead:

2018 has not been kind to The Usos. Former tag tam champions, the Usos would see their titles lost earlier in the year, while suffering losses in unremarkable matches. Could the veteran tag team triumph against Daniel Bryan and WWE Champion AJ Styles? Actually, they could! Thanks to Styles accidentally getting fed a forearm from Bryan, the Usos managed to make use of the distraction and land a double super-kick to the yes man.

Evolution is a mystery! Ball and chain that no one sees! Motorhead sang those words so many years ago when Evolution first burst onto the scene, as the past, present and future of the WWE reigned supreme as a dominant force in the inustry before inner turmoil broke them up. Last night saw the powerhouse quartet of Triple H, Ric Flair, Batista and Randy Orton back in the same ring in many a year, but the hugs could not hide the scars of betrayal that had led to the group splintering in the first place.

The Miz def. Rusev to qualify for the WWE World Cup

Rusev’s bid to enter the WWE World Cup looked to be in the bag when he faced The Miz, but thanks to Aiden English making an appearance at ringside, the shenanigans saw the A-Lister take advantage and catch the super athlete in a sneaky pin for the three-count.

Not even Edge was safe from Becky Lynch’s vicious verbal jabs, as the former Rated-R superstar was dumped from the ring so that the Lass-kicker and Charlotte flair could have another wild brawl that required WWE officials to separate the two.

The Bar def. The New Day to win the SmackDown Tag Team Titles

With another shot at glory on the line, The Bar wasted no time in making the most of their latest opportunity to reclaim the tag team gold. In a pitched battle, Seamus and Cesaro proved to be the better team last night.  With the Big Show arriving in the middle of the match, semingly to help Kofi Kingston up but instead chokeslamming him into oblivion, a distracted Big E was soon met with a Brogue Kick that saw The Bar crowned as champs once again.

The master of the 619 made his long-awaited return to team blue, tackling the king of strong style in a top rope match of thrills a’plenty. Giving as good as he got, Mysterio would eventually connect with a 619 and a Frog Splash, earning the right to move on to the WWE World Cup.

Smackdown LIVE’s 1000th episode ended with another return last night: The phenom himself, slowly walking towards the ring under the ominous glow of blue lights and with the sound of his signature church bells in the background. The Undertaker had a simple message for Degeneration X, ahead of their showdown at WWE Crown Jewel, a message that many a challenger has fallen to in the past: