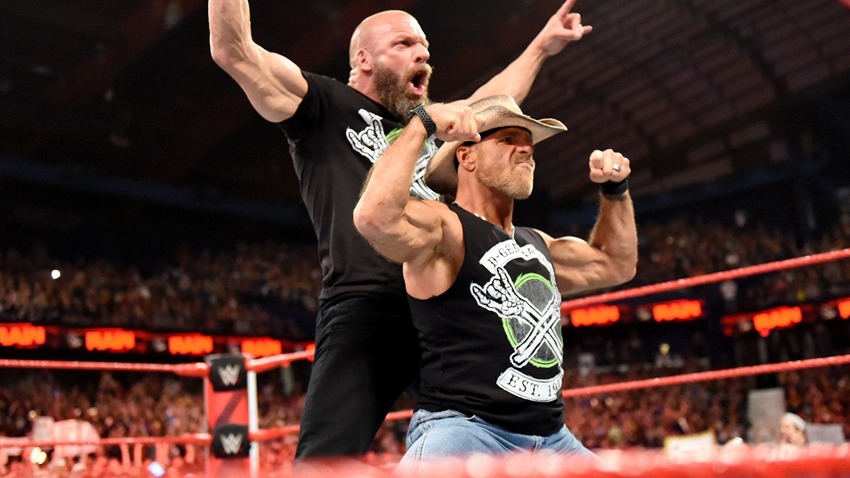 WWE Monday Night RAW took place from the Allstate Arena in Chicago, Illinois. Here’s all the action that went down.

D-Generation X re-formed to challenge The Brothers of Destruction

Are you ready? After eight and a half years, the Heartbreak Kid is finally ready to set foot back in the ring, thanks to the events of Saturday’s WWE Super Showdown that saw the Undertaker and Kane demolish the two legends after the bell had rung. Only this time, it wouldn’t just be a tag team of Triple H and Shawn Michaels facing the Brothers of Destruction, but the reformation of Degeneration X instead. The arena chosen for the next bout? None other than the upcoming Crown Jewel in Saudi Arabia.

If Saturday was a bad day for Kevin Owens, then Monday Night was even worse as Bobby Lashley unloaded an entire arsenal of pain on the Prizefighter, while his young ward Lio Rush peppered the former Universal champ with a barrage of insults.

Raw Women’s Champion Ronda Rousey and The Bella Twins def. The Riott Squad; The Bellas attacked Rousey after the match

Another night, another victory for the Bellas, but the real story was the duo’s takedown of the RAW Women’s champion after they’d won the match. Standing tall and proud after they’d demolished the baddest woman on the planet, the Bellas sent a message to Rousey: Her reign as champion, was on notice.

Team B ‘n B versus Mahalicia, round two! With a coup de grace delivered to the Modern Day Maharaja, Finn Balor and Bayley kept their winning streak alive for another week as Jinder Mahal and Alicia Fox fell before their combined talents yet again.

Four RAW superstars. Four Smackdown LIVE superstars. One match at Crown Jewel, with the winner being declared the best in the world. Who would win in an impromptu battle royal, and earn a spot in the World Cup event alongside a confirmed John Cena? None other, than the Conquistador! Just kidding, it was actually a disguised Kurt Angle, who eliminated Baron Corbin and booked a spot in the massive match.

The Irresistible Force of Nia Jax may be nigh unstoppable, but Ember Moon managed to outsmart Jax and keep her out of the ring long enough for the ref to count her out.

A challenge that Trish Stratus was only too happy to accept, as she had the perfect partner in her corner for the showdown: The original extreme queen herself, Lita. One appearance and a storming of the ring later, and the return of the WWE icons had resulted in some pure Stratusfaction.

Bobby Roode and Chad Gable def. The Ascension; AOP attacked after the match

After two weeks of wins, the Ascension were back to their usual losing ways. While Bobby Roode and Chad Gable still have some kinks to work out in their alliance, said partnership will have to be solidified quicker as the seasoned Authors of Pain descended on the ring and administered some brutal pain to the glorious one and his partner.

Long story short: Roman Reigns and Braun Strowman might be in trouble. According to Paul Heyman, the two beasts aren’t going to be in any condition for Lesnar when he returns at Crown Jewel and fights fr the WWE Universal title, as Lesnar fights only for himself and is unburdened by the needs of travel or team management.

After weeks of back and forth action, Dolph Ziggler and his crew notched another win against The Shield in their ongoing feud, but it’s a win that may have had disastrous consequences for The Shield. Avenging their WWE Super Showdown loss, Dean Ambrose was caught in a perfect lights-out by Drew McIntyre and thus ended the match.

Dejected, Ambrose strolled away from his brothers, leaving the future of the team in question.