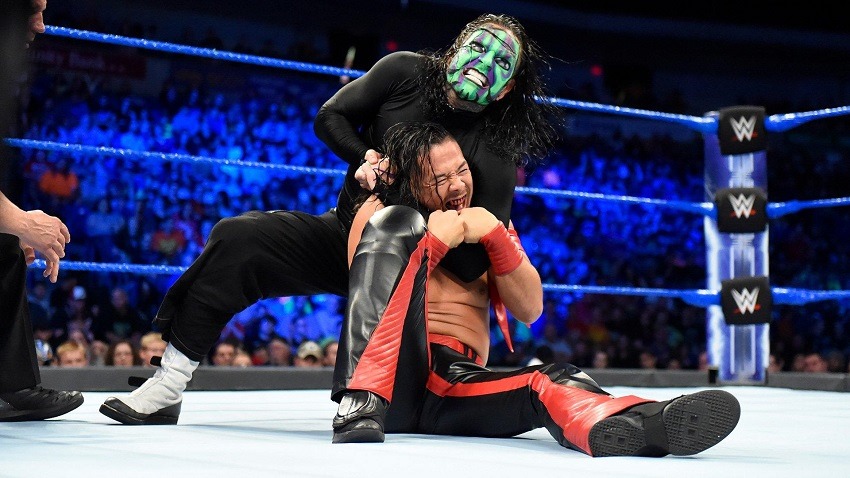 WWE Smackdown LIVE took place from the Mohegan Sun Arena at Casey Plaza in Wilkes-Barre, Pennsylvania. Here’s all the action that went down last night.

Not exactly in a good mood thanks to his loss at Extreme Rules which saw Shinsuke Nakamura emerge as the new United States champion under controversial circumstances, Jeff Hardy was looking to throw down as soon as possible so that he could reclaim his title. Invoking his rematch clause, the enigma promised a different ending to his next match, as he prepared to do battle once again with Nakamura.

Having triumphed over Rusev at Extreme Rules, a battered AJ Styles locked horns with Andrade Almas and absorbed a ton of punishment. Just when it looked like Almas would score a huge win over Styles however, the champion pulled out a calf crusher from out of nowhere, sealing the deal on the match.

Even with Sonya Deville in her corner, Mandy Rose was still no match for the lass-kicker. Finishing off her opponent quickly, Lynch grabbed a microphone and announced that she was ready to become champion once again. An idea that Paige seemed thrilled by, as she scheduled a non-title match against current champion Carmella for next week’s Smackdown LIVE.

Looking for some payback after last week’s assault, Tye Dillinger threw everything he had at Samoa Joe and still came up short when the bruiser locked him into the dreaded Coquina Clutch.

Daniel Bryan interrupted The Miz’s “funeral” for Team Hell No

Fed up with the antics of The Miz, Daniel Bryan decided to vent his frustrations out on the A-Lister and the pall-bearers who accompanied him to help bury the legacy of Team Hell No. Am I the only one who thinks that the official Team Hell No T-shirt looks like an angry raisin?

SaniTY prevailed once again, when Eric Young outlasted Kofi Kingston (With a little help from Killian Dain), grabbing the New Day member with a deadly neckbreaker.

Jeff Hardy got his rematch and he certainly got his win, but not the way he intended to. After connecting with a Swanton Bomb, it looked like Jeff Hardy would walk out of town with his United States championship back around his waist, but Randy Orton had other ideas. Dragging Hardy off of a prone Nakamura during the pin, the Apex Predator battered Hardy and gave him a DQ win for his troubles.

Champion’s advantage meant that Nakamura would retain his gold however, as Hardy’s night ended with a vicious DDT on the announce table.