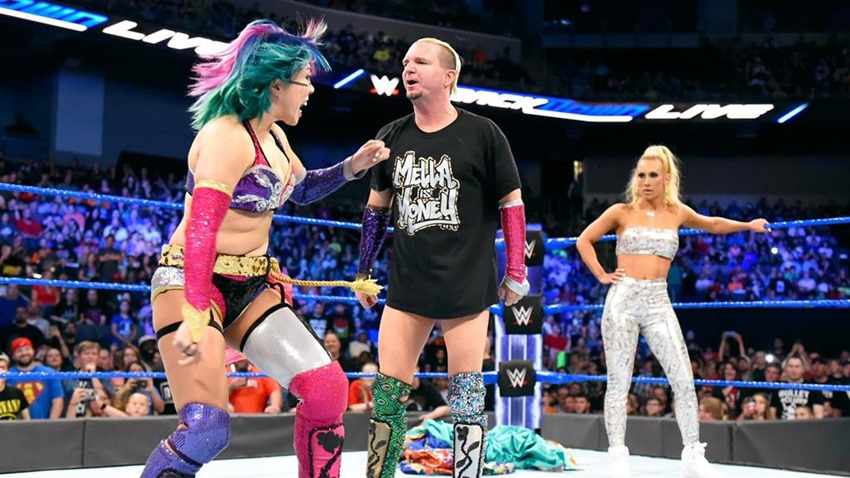 WWE Smackdown LIVE took place this week from the Huntington Center in Toledo, Ohio. Here’s all the action that went down last night.

It’s official: Carmella not only has a win over Asuka, she’s also still the Smackdown LIVE Women’s champion thanks to a timely assist from James Ellsworth at Money In The Bank. After having provided a bizarre distraction at Sunday’s event, Carmella decided to celebrate her victory and Ellsworth’s return. Invoking the wrath of Asuka when he decided to read out a list of challengers that the love of his life was better than, Ellsworth soon got a gut kick from the Empress of Tomorrow when he attempted to intimidate her.

Carmella would have the last laugh however, as Ellsworth’s distraction gave the Staten Island princess the gap she needed to clock Asuka with a superkick.

When you’re fighting the IIconics, you’re taking on not one but two members of that team at any given time. That’s the situation that Becky Lynch found herself in, as her bout with Billie Kay saw some ringside meddling by Peyton Royce. Removing her from the equation with a crossbody from the ring apron, Lynch made quick work of Billie Kay with a Dis-Arm-Her submission that had the IIlconic tapping out.

SAnitY debuted and attacked The Usos

There’s a new team on the Smackdown LIVE roster and buddy they are crazy. SAnitY finally arrived to team blue, and with a debut bout against The Usos scheduled, it would appear that Eric Young, Killian Dain and Alexander Wolfe were thrown into the deep end. Deciding to take the initiative after having been subjected to an Uso sermon, SAnitY ambushed the veterans and left them battered in the middle of the ring.

Going two for two after their Money In The Bank match last week, the Bludgeon Bros. pulled off another victory against Luke Gallows and Karl Anderson, soundly defeating the Good Brothers with a double Power-bomb that locked onto Anderson. 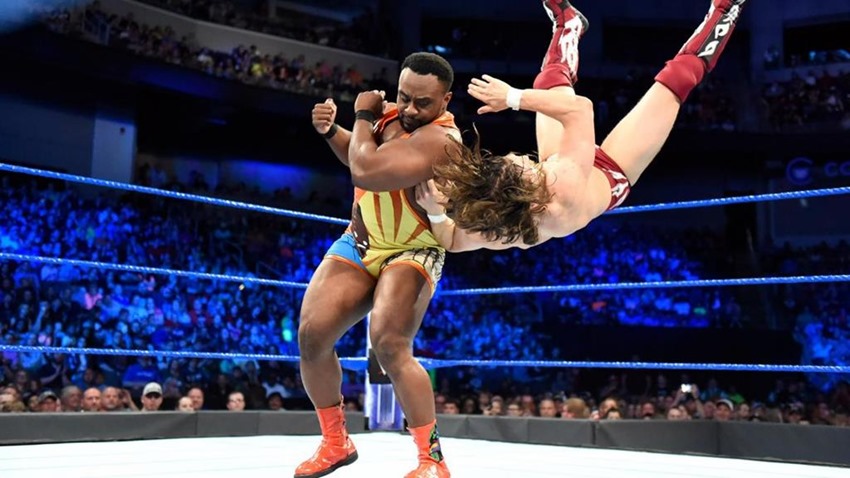 With Big Cass having been future endeavoured last night, Smackdown LIVE was in dire need of a new heel. That man, was none other than Rusev. Winning the gauntlet match in devastating fashion,Rusev’s victory derailed Daniel Bryan’s own mission to succeed after the underdog had managed to overcome the likes of Big E and Samoa Joe.

Bryan’s momentum was cut short by a Bludgeon Bros. ambush, leaving The Miz with a golden opportunity to put Bryan away. With just Rusev left, the Bulgarian Brute put the A-Lister down after a gruelling battle that earned him the right to face off against WWE Champion AJ Styles. Arriving to draw his line in the sand, Styles sent a statement of his own to Rusev when he clocked Aiden English in the jaw.