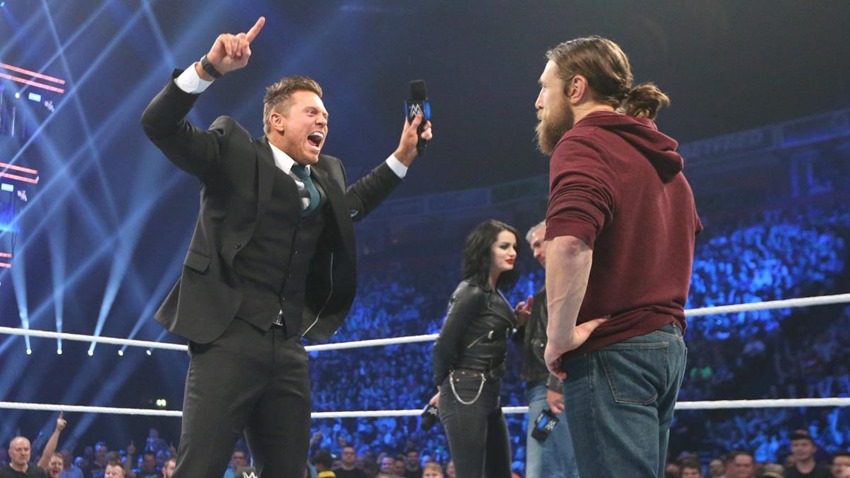 WWE Smackdown LIVE took place this week from Manchester in England. Here’s all the action that went down on the road to Survivor Series.

Well here’s one for the history books: Smackdown LIVE will have co-captains for their Survivor Series team against RAW, as both Daniel Bryan and The Miz got the nod. Kicking off the show, Shane McMahon had originally chosen the YES! man to lead the team, but it was The Miz’s insistence that Shane was technically sharing the spoils of the WWE World Cup win with him, after the A-Lister battled through the tournament at the WWE Crown Jewel event and reached the finals, only to injure himself.

The next big announcement? A mutual agreement from The Miz and Bryan, that Shane should be on their team. An offer, that Shane-O-Mac gladly accepted.

The Usos def. The New Day to become the captains of the SmackDown LIVE Tag Team Survivor Series team

It’s not just a traditional five on five match that’ll go down at Survivor Series this year, as RAW and Smackdown LIVE’s tag teams will also clash in their own elimination match. With a shot at captaining such a team up for grabs, The Usos managed to snatch the win and the prize when Jimmy put Kofi Kingston down for the count with a huge top rope Splash.

The Usos wasted no time in forming their team after the bell was rung, as they announced that the New Day would join their roster.

After spending a good few minutes detailing how she’d be breaking Ronda Rousey’s arm at Survivor Series, Becky Lynch was met with an unexpected challenger: SaniTy’s pal from NXT, Nikki Cross! The twisted sister may have had the intensity to give Lynch a run for her money, but like so many other challengers, she quickly fell to the Dis-Arm-Her hold and was left tapping out moments later.

In their first ever showdown against one another, Andrade Almas attempted to keep Rey Mysterio grounded and away from the ropes, but the master of the 619 bounced back and executed his signature moves to score a huge win for the night and a slot in the Survivor Series team. The celebrations were cut short however when Mysterio walked into an RKO from outta nowhere, as Randy Orton is still fuming after his loss to the biggest little man at WWE Crown Jewel.

Smackdown LIVE has a team ready for the Women’s division Survivor Series match: Naomi, Carmella, Asuka, Sonya DeVille and Charlotte Flair. Well, four out of five members anyway, as Charlotte was nowhere to be found. Instead, Mandy Rose rocked up on the scene and demanded that she take Flair’s place, even going so far as to cross the line and make certain insinuations regarding Naomi’s husband Jimmy Uso.

One forearm to the face later, and it was every woman for herself in the ruckus that erupted.

With one slot left on the Smackdown LIVE Survivor Series team, it was Samoa Joe’s bruising offense that kept Jeff Hardy in risky territory and eventually saw the charismatic enigma tap out to the Coquina Clutch. Gloating in front of his co-captains, Samoa Joe soon felt the wrath of Daniel Bryan when their fight spilled into the ring, as the perpetual underdog handed out beatings left, right and center to anyone who got in his way. Even his own teammates, as Shane McMahon quickly found himself on the receiving end of an almighty Judo throw to close out the night.