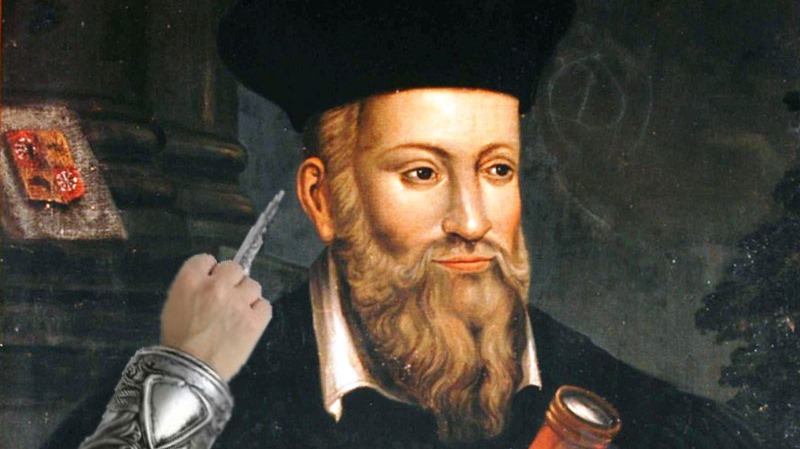 When it came to predictions, Nostradamus was about as accurate as a level 1 Call Of Duty player adopting the tactic of “pray and spray” during online matches. He was in fact, dubiously incorrect in every single prediction he ever made, but that hasn’t stopped him from somehow appearing in various media throughout the ages. The bearded prophet has a role to play in Assassin’s Creed Unity, and it involves enigmas that can be used to unlock further. But you’ll need to unlock a series of runes first. Here’s where you can find all of them.

If you’re looking for a specific riddle, remember that CTRL+F is your best friend. 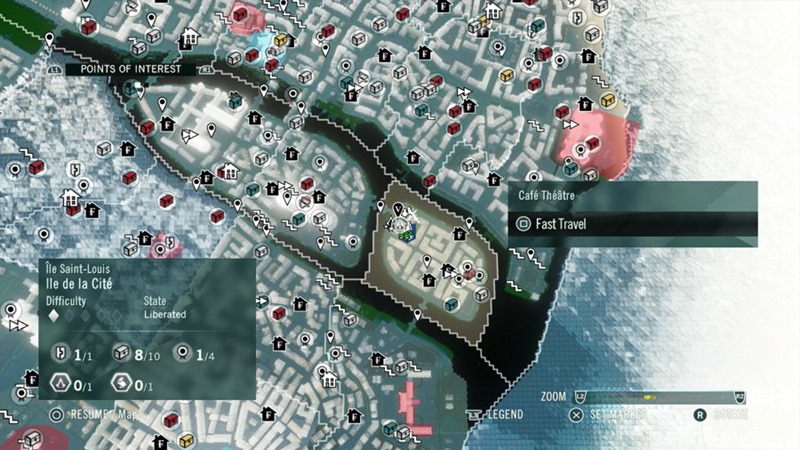 Inside the Cafe Theatre mansion and at the top of the main staircase, the symbol can be found on a painting.

Right on top of the Cafe Theatre weathervane. 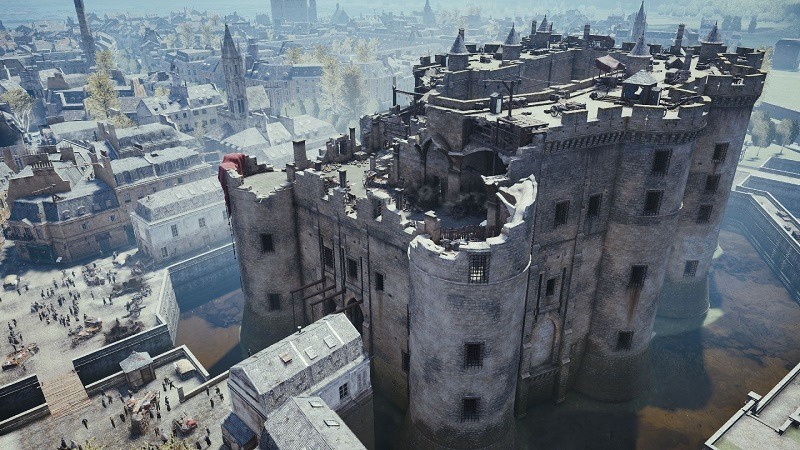 North of the Bastille, there is a statue of an angel holding a spear. You’ll find the symbol on that statue.

Follow the direction that the spear points to, and you’ll come across a church that has gargoyle sculptures. You’ll find the symbol at the base of this statue.

Head north from the gargoyles until you find a tower that resembles a chess rook piece. The symbol will be found on the roof of this building. 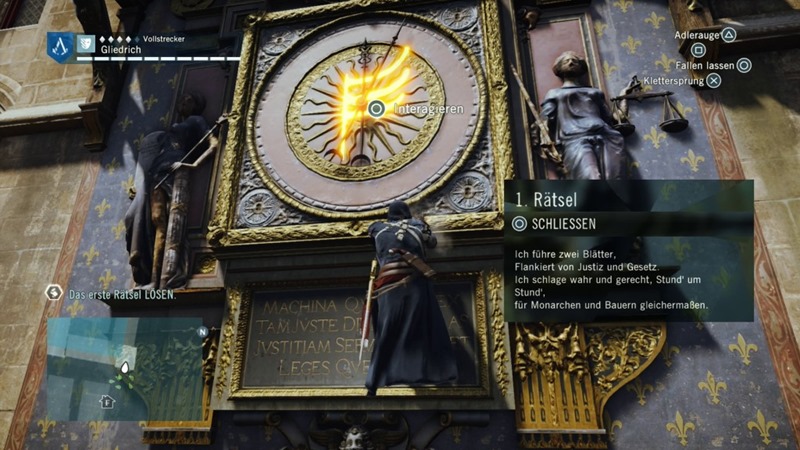 In the Boulevard du Palais, the symbol can be found on a big clock.

At Notre Dame Cathedral, you’ll find the next symbol on the west side of that landmark.

Staying at the cathedral, the final symbol can be found beneath the fifth arch. 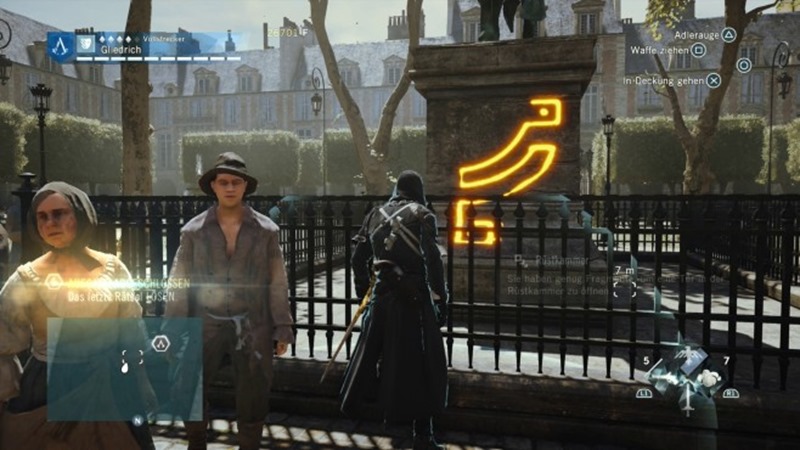 At the Church of Saint-Gervais-Saint-Protais, the symbol rests at the foot of a tree.

Underneath the square section roof of the Hotel de sens, the symbol waits.

In Place des Vosges, exploring the base of the statue of the horse’s head will reveal a symbol.

On the south face of the College des Quatre Nations, you will find a symbol.

East of Sorbonne, there lies an observatory. At the windows of this building, the symbol is nestled away.

From the Paris Observatory, you can find another symbol at the base of the telescope.

North of Notre Dame, you’ll find a graveyard and an angel statue at the front of it. The symbol rests on it.

Between Saint Chappell and Notre Dame, is another church. At it’s main entrance is a flag, with the symbol on the carving above that gate.

A statue of Henri IV can be found at Place Dauphine, with the symbol on the pedestal of it.

On the ground floor of the Marquis de Sade’s home which is east of the Cour des Miracles, you can find the symbol.

Near a wooden cross in the centre of the Cour des Miracles, you’ll find another symbol.

South-west of Cour des Miracles, you’ll find a crossroads and the symbol.

At the Place Vendome and behind the statue in the middle of the square, you’ll find a symbol on the ground.

Also on the ground by an abandoned cart near a lamp-post by west end gate of the Champs-Elysees.

At Medici’s Tower, you’ll find a Iron Cage and a ladder. Follow the ladder to the bottom, to find the symbol.

At the Grand Chatelet, go south-west of your position, climb the tall tower and find the symbol.

In the Cemetery of the Holy Innocents, there is a dance mural with the symbol on it in the southern gallery.

Go to the Eglise St. Eustahce church, and you’ll find the symbol on the south-western bell tower. 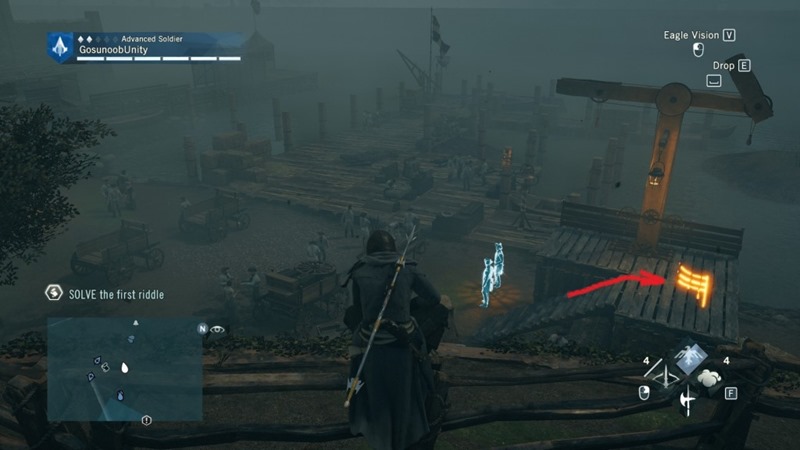 On a nearby wooden structure by the bridge, the symbol is on one of the beams that are jutting out.

On the central pillar of the gate that lead into the Champ de Mars.

At the Cult of the Supreme Being, go to the stage after the celebration to find the symbol on the ground.

At Ecole Militaire, the symbol can be found beneath a pair of statues.

At the tallest part of the St. Germain Church, the symbol rests on a round platform.

On the ground of the Palais du Luxembourg, there is a compass pattern where the symbol can be found.

At Luxembourg Gardens, on the ground beneath the fountain.

Staying in Luxemborg, head into the Gardens catacombs and find the symbol on the wall by the candles.

On the roof of the Pantheon, you’ll find a symbol in the passage.

here’s a triangular bit on the roof of the Pantheon. The symbol’s in the passage here.

South side columns circling the Pantheon roof. Go get it.

Ground level of the Pantheon east side, the symbol can be found on the floor by the raised pillars section.

Inside the Pantheon, look for a painting by a dome. Hit your eagle vision to uncover the symbol.

Inside the tombs on the western side of the Pantheon, you’ll find a tomb that is being guarded by two soldiers. Kill them, orphan their childrens when their moms die of grief and find the symbol.

Find the wooden bench on the south gate of the Palais Bourbon, and look above it.

On the wall of a broken waterwheel south of Palais Bourbon.

Riddle 3: “Across the wall, / On the other side. / Souls cross the bridge, / To Southlands beyond.”

Go south-east from here, find a bridge, follow the river and by the next bridge you’ll see the symbol in the middle.

Riddle 1: “A once-Auguste palace / Become a shelter for the beautiful, / The days of sovereigns tick along, / Up to, but not beyond, Louis.”

In the courtyard in the Louvre, you’ll find a small clock and the next symbol.

In the Palais Royal Gardens, behind the statue in the middle, there is a cannon. And the symbol.

In the center of the bridge between Palais Bourbon and the nasty guillotine, the next symbol can be spotted with your eyes of the eagle.

At the south-eastern edge of Paris, there lies a swamp. Find the chest on the ground and you’ll find the symbol.

Near the chest on the ground of the swamp area that lies along the south-eastern edge of Paris.

East of the fountain inside the Hopital de la Salpetriere’s courtyard, and on the ground.

At the very north section between Saint-Marcel and Saint-Jacques, the symbol can be seen at the foot of the tower where the river merges.

On the wall towards the top of the Temple’s eastern tower.

Find the next symbol on the ground by the Temple fountain.

In the Temple crypts of the graveyard, find the symbol on the sarcophagus with your eagle eyes.

Above the entrance of the Hotel de Ville.

In front of the Hotel de Ville, beneath the lantern at the front..

Climb the tower west of Tour St. Jacques and find the symbol at the top.

Find the pair of statues at Tuileries Palace, and take the symbol from the ledge between the sculptures.

The guillotine at Place de la Concorde, conceals the symbol on the ground towards the east.

The final symbol can be found on a mausoleum wall in the the graveyard at the Church of Madeleine.