Home Gaming Be the butler in Batman Arkham Knight

We all know who the real muscle is in Gotham City. It isn’t the Batman, it most certainly isn’t the Gotham City Police Department and it sure as hell isn’t Oswald Cobblepot AKA The Penguin. No, if there’s one thing that I’ve learnt in life, it’s that the butler always, always did it.

And in this case, Alfred Pennyworth is busting heads all along Gotham as he takes on the criminal underworld. And doing so while keeping his suit in immaculate condition as well. Now that’s just class.

If you can’t watch it above, the video I’ve embedded contains several minutes of the faithful Batman butler delivering an entire turbo-mansion’s worth of boot to ass. It’s all part of a PC mod created by tchi6, although it does have a few limitations.

Alfred has a limited moveset, is unable to perform counter-attacks, use environmental take-downs or finish off enemies with Dual Team take-downs.

This is all moot however, as the idea of playing a Batman game as Alfred Pennyworth is something that I hope to see the season pass exploit. Until that happens however, this mod is the next best thing.

The funny thing is there is a precedent in the comics that legitimately allows Alfred to be an ass-kicker. When he first rocked up in Batman, Alfred was a bumbling hindrance to Batman, an overweight British stereotype that spoke in an accent more clichéd than Dick Van Dyke’s cockeny dialect in Mary Poppins.

This soon changed however, when Alfred got sent to fat camp and came back as a suave and debonair ally of Batman. Over the years, his character was slowly retconned to have a British military background and some field service medic experience, which explains how he knows how to constantly patch Batman up.

The most extreme version of this Aflred being of course, in the Batman Earth One graphic novels, where he happens to be a full-on hardcore military specialist who taught Bruce everything he knows about fighting. 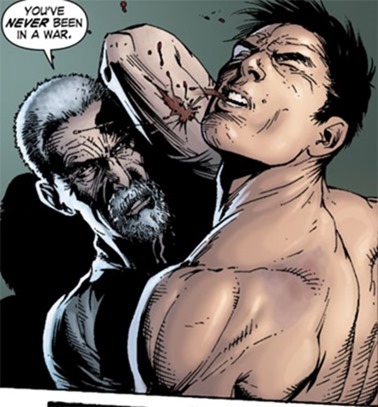 And that’s your geekgasm for the day then.