Home Gaming ‘Beautify the world through destruction’ in Just Cause 3 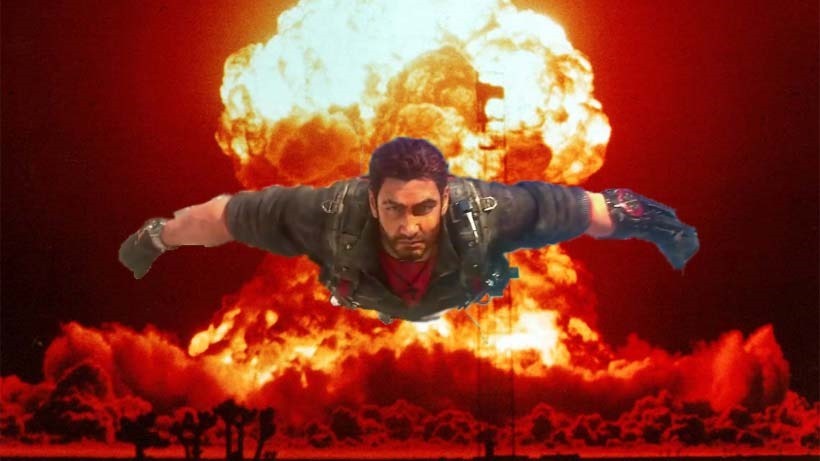 Just Cause was an alright game. Just Cause 2 was a better game however, because of the sheer lunacy involved in attaching soldier to jet fighters and then sending those million-dollar interceptors careening off of a cliff and into a pile of fuel drums.

And that’s the kind of anarchy that defined Just Cause 2. In Just Cause 3 however, that destruction is getting turned up to 11. “We wanted destruction to be more physics-driven and more like a fun toybox that can be used as part of the gameplay,” Avalanche Studios’ senior technical designer Anders Bodbacka said to OXM.

More than looking pretty and going boom, if you tether things correctly you can use them defensively or create cascading destruction – destroying an entire base just by pulling one tether. That wasn’t possible before, but improvements in technology let you do this stuff.

In order to nail that Baysplosion magic, Avalanche had to embrace their inner Michael Bay. No really:

Finding that sweet spot between cool and realistic is difficult. It’s really about creating drama in destruction. If you shoot one thing and it goes boom, you can do it a couple of times and know it’ll go boom – and soon it’s not so much fun.

But if you attach it to a helicopter or shoot its supports and they crumble and it begins to roll away… well, you’re now directing all that destruction. You’re Michael Bay.

Destruction and chaos go hand in hand. After all, there’s no order behind the beautifully alluring flames of a fresh explosion, and no I do not have pyromania. It’s that kind of chaos, which has helped shape Just Cause 3:

The good thing about using the Havok physics is not scripting events – by just placing things in a general area, you create something unique. If you know a barrel causes so much damage you can think, ‘I need to place the barrel approximately here and it will affect this or that object.’

But you still have the option to tether a barrel to a helicopter to destroy it, or you tether it to the helicopter, take over that helicopter and fly them both into a base. Not designing is part of designing.

The main philosophy behind the game is to beautify the world through destruction, so everything built by the government is destructible – so by destroying those things, you make the world more beautiful.

We wanted a beautiful world that’s worthy of destruction – you want to free this world. In order to do that we have populated towns that feel like they are alive so there’s something to care about and fight for.

These people are oppressed and you can feel it when you are nearby – liberate an area and suddenly everyone is out drinking in the street. It’s a totally different environment.

I love that kind of freedom, but the real challenge here, will always be in keeping such reckless action interesting. Then again, I get distracted by crayons, so this shouldn’t be too difficult.

Everything shown in this week’s Square Enix Presents

Here’s a look at everything that was revealed in the first Square Enix Presents, from Proj…