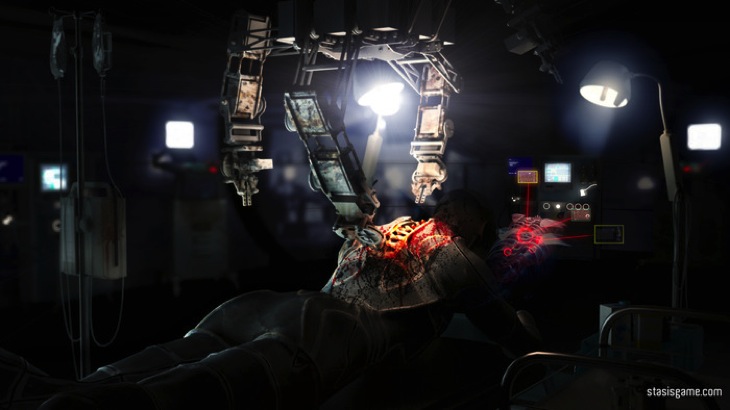 At the end of last year, Chris Bischoff made major indie news when his game, Stasis, made $132,523 on Kickstarter and got Greenlit. He and his brother Nic are awesome local guys, and they’ve released a video update for the game. I like watching it for the part when Chris is nearly unable to eat a sweetie.

Here’s the video showing some of the updates – I love seeing the transformation of the screenshots:

The game is certainly looking (and sounding) creepy. But it goes beyond aesthetic upgrades. The Alpha demo got a bunch of Let’s Plays during the Kickstarter period, which have been used to help change some elements of gameplay. According to the Kickstarter update:

Watching the “Let’s Plays”, I have noticed that the pacing has worked. The last piece of the demo takes a few minutes to play through, while the first half takes up the majority of the time. Using that pacing, I have and added some larger puzzles and simplified some of the smaller ones. This way we can keep players in scarier locations for longer and give a sense of safety for shorter periods. I have put this into practice with the sewer system. Initially this was a very quick area to traverse but it has now been expanded into a fully fledged puzzle.

Shame, it seems that Chris has been spending a lot of time in the sewers lately, upgrading and expanding that environment. It’s looking really impressive, though – well worth the time and effort.

Another update is that there is another Chris on board with Stasis game – Christopher Dare has been hired as a writer and editor. He will work on fleshing out and adding flare to existing writing, as well as ensuring that the language is consistent. Definitely important work, and will also help when the game needs to be translated and localized to different regions.

I really appreciate the update, and I’m glad to hear that we’ll be getting updates on a regular basis – and with video. Too often these kickstarted/greenlit games seem to disappear into the ether. This way, no one can claim that they don’t know what’s going on, and we can keep the excitement going for this unique sci-fi indie.