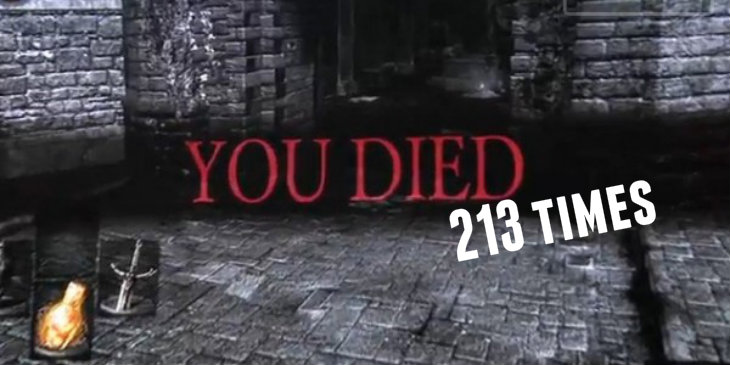 Do you guys remember our poor, innocent little intern, Vicky? He asked us if Dark Souls was hard, or if people just complained. In the spirit of Dark Souls, we told him it wasn’t hard at all, and he was just bad at gaming. Gotta break his spirit somehow. It is hard, and you will die, but how many times? Now you can find out!

This fan-made site lets you upload your save data to find out how many times you’ve died. That’s right, get your exact numbers of awful, frustrating and debilitating setbacks. Unfortunately, it’s only for PC gamers – the guy has no clue how to make it work for console save files. Still, he managed to compile some statistics that share the hopelessness of it all.

According to his stats, the average number of deaths per playthrough for all players was 638 with an average total deaths for all players of 213. Of those who uploaded, only about 20% completed the game with the majority of people leaving off somewhere between Anor London and 1/4 Lord Souls. As for optional areas, almost 80% of you completed Lower Undead Burg/Depths while only a little over 60% returned to the Undead Asylum. But don’t worry, about half of those who played the game took on that hydra, completing Great Hollow/Ash Lake. Well done.

You won’t need to complete Dark Souls before you can play its impending sequel,  Dark Souls 2. Just prepare to die… hundreds of times.