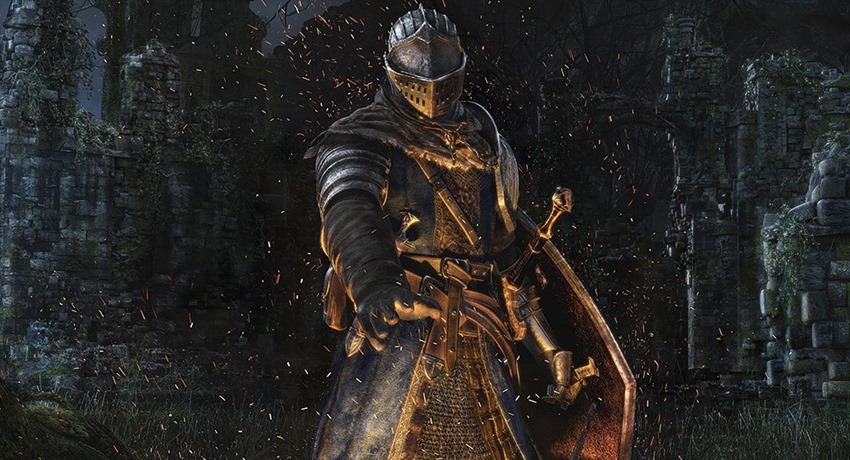 You traverse a stone staircase, its twisting trail leading into a dark abyss. A monstrous creature leaps from an alcove in the wall, its talons piercing your flesh. You die.

You traverse a stone staircase, its twisting trail leading into a dark abyss. A monstrous creature leaps from an alcove in the wall, its talons flailing as you side step and plunge a dagger into its feathered thorax. You triumphantly step forward as a boulder emerges from the darkness. You die.

You traverse a stone staircase, its twisting trail leading into a dark abyss. A monstrous creature leaps from an alcove in the wall, its talons flailing as you side step and plunge a dagger into its feathered thorax. You triumphantly step forward as a boulder emerges from the darkness. You step into the alcove, the boulder passes and you emerge through the darkness into the light of a bonfire.

This is Dark Souls – and this is a lifelong lesson learned only through death. The lesson: try again, try harder, try smarter and try again, again.

But as a teacher, Dark Souls is as monstrous as it is effective. It’ll kill you, it’ll discourage you – and it fundamentally doesn’t care about your feelings. And despite reading like a questionable attempt at a text-based adventure game, the above is a typical Souls scenario.

It’s a story in which the path to success is littered with corpses. Yours. 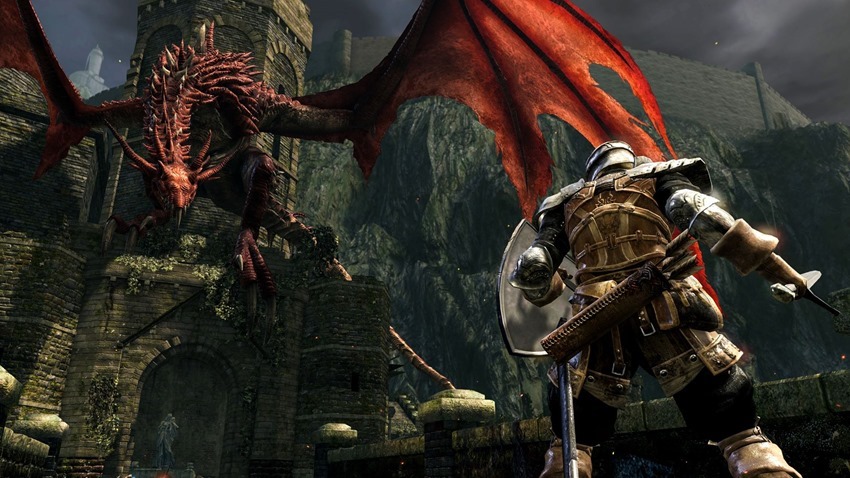 Dark Souls seldom gives you the keys to the castle. Everything from the smallest victory to the game’s oblique narrative has to be taken from its clawed grasp. Story isn’t dished out in hour-long cut scenes or a 500-page codex. Like everything else in Souls, story requires effort, patience and dedication, as you extract information from cryptic dialogue and myriad descriptions.

Here, grit is a qualification required if you want to get on the waiting list’s waiting list for an interview for the job. It’s a role in which a big sword and heavy armour won’t shield you from poor play.

But it’s not simply about banging your helmet against a stone wall in the hope that said wall will crack. Dark Souls demands wit and cunning, too. Try again, try harder – but try different. Each encounter is a form of natural selection in microcosm. You make an attempt: action one succeeds, action two fails – that second action is removed from play. You make another attempt: action one succeeds – you know that from the first try – a new second action gets you to the third action.

You try the cycle anew, replacing that third action with a move that finally succeeds.

And it’s this ‘natural selection’ process that makes Dark Souls so compelling. Each encounter is a combination lock, an assortment of approaches and techniques until you hear that ‘click’, then another, and another. And if you try to break into any area of the game you’re simply not ready for, Dark Souls lets you know – by killing you.

And it’s the repeated failure to find these ‘clicks’ that makes it so exhilarating when you find the right combination to push forward.

It’s also an ode to the old adage that knowledge is power. That knowledge is only obtained through experience, through seemingly endless trial and error. It’s not about the biggest sword or the flashiest spell – though they help – it’s about knowing what to do. A combination of preparation and a calculated exposure to failure.

As the Souls saying goes, “If you can hit it and you can dodge it, you can kill it.” In simpler terms, if you know its attack pattern and you know its weak spot, you will win. Key word: know. It might take a lifetime – though, given how brief one of those is in Dark Souls isn’t really saying much – but it can be done.

Children learn through play – and it’s not clear why video games can’t instil a similar learning process. Will Dark Souls be somebody’s first exposure to the idea that only through repeated failure can you increase your chances of success?

Perhaps not – and you’d certainly hope not.

But does Dark Souls present this adage in a way that really hits home? Perhaps. It reveals the truth behind the tale in a direct and compressed way. It’s a truth presented in microcosm: we’re not making multiple attempts over tens of years, but over tens of hours.

And yet it’s not just Dark Souls’ difficulty that emphasises the iterative process in the face of adversity, as the series’ mechanics also acknowledge that “to try is to risk”. 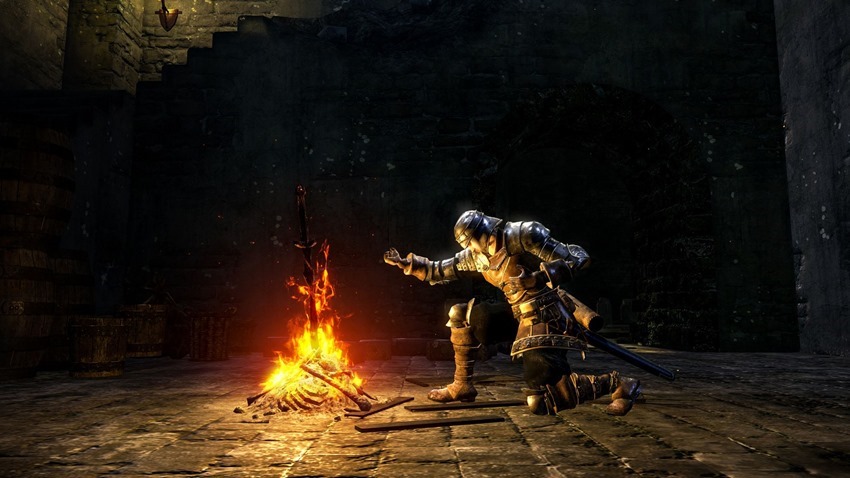 You venture out into the unknown, beyond the threshold of the bonfire’s glowing safety. You progress, you die and your souls occupy your resting place. You’ve tried and failed. Dark Souls says: if you don’t try again, you lose the progress of your previous attempt. To try again is to risk that progress, but not to try again is an automatic failure: your souls are lost.

Reluctance to try again compounds that failure. If you don’t try again, all is lost – in comparison to another attempt which might mean a chance at redemption. It also invites you to face the metaphorical – and literal – demon that killed you. It brings you face-to-face with your weakness, one that you must overcome to become stronger and progress.

Take that lesson further, and we’re greeted with signs left by those who came before us – breadcrumbs left by those who’ve tried and died. Fundamentally, you’re not alone in your journey. There’s advice from people far wiser, far more experienced.

There’s a subjectivity to it all. An interpretive, dream-like quality to the world’s inhabitants and the narrative that binds them together. In that sense, Dark Souls is both a struggle against the evils of the world and a struggle to make your own story – not unlike life.

It’s easy to see how large swaths of Souls can be contextualised this way. Big Nasties that earned haunting boss music and a shiny health bar later become relegated to ‘normies’, showing how something that once seemed big, scary and daunting can become almost everyday and mundane. A sign of progress, if nothing else. 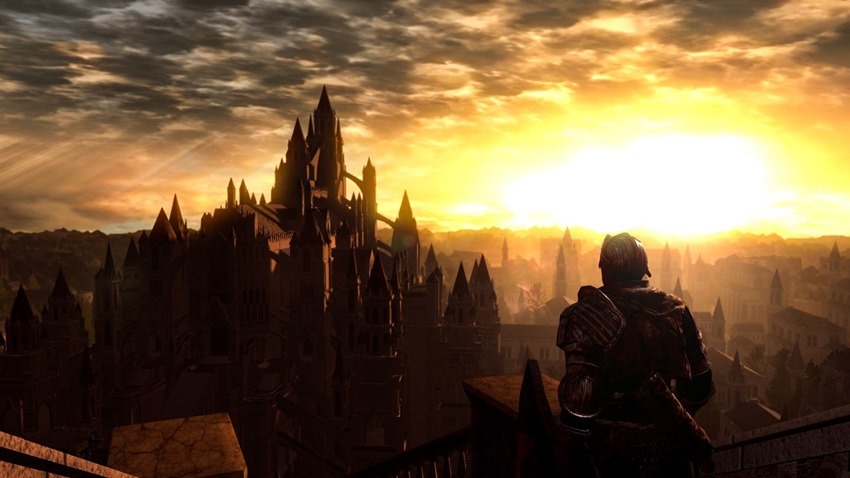 You get into the office, you turn on your laptop to continue on write that impossible report. You put on your bosses desk. It’s wrong – not enough information. You fail.

You get into the office, turn on your laptop and continue to write that impossible report. You put it on your boss’s desk. It’s not quite right – not enough figures. You fail.

You get into the office, turn on your laptop and continue to write that impossible report. You put it on your boss’s desk. It’s spot on. You walk triumphantly to the glow of your laptop screen. You succeeded.

Dark Souls is an effective teacher of the lesson, but that doesn’t mean it has to stay in the classroom. A difficult day, a difficult week can be made just a little less difficult with the thought that “to try is to fail, so try again, try harder and try different.