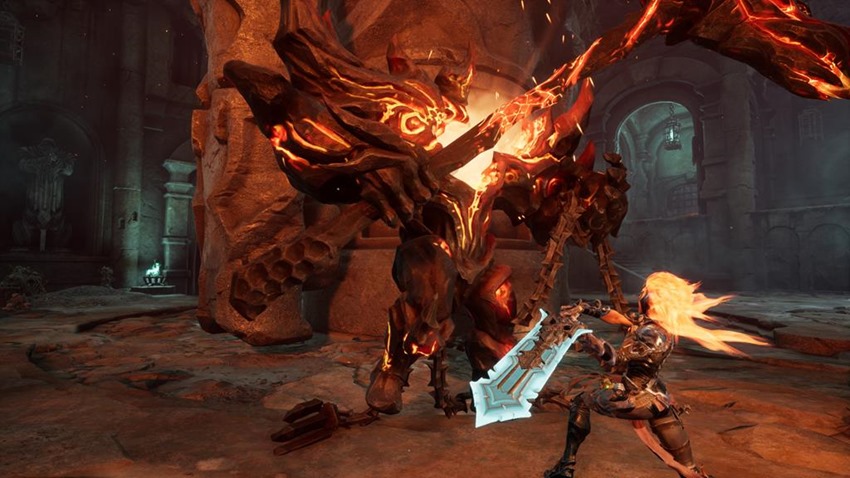 Going into Darksiders III, I’d decided to temper my expectations. Sure, it had been a good couple of years since Death had taken THQ with him in Darksiders 2, the franchise slipping into the abyss as the once-mighty publisher and developer fell into a pit of bankruptcy from which there was no crawling back. Nordic Games may have picked up the series and rebranded itself as THQ Nordic, but the announcement of Darksiders III was one that made me realise that even if a resurrection was on the cards, there’d be a few caveats along the way.

After all, THQ Nordic may be flush with cash currently, but it couldn’t funnel all of it towards developer Gunfire Games for their sequel. In many ways, Darksiders III does so much with very little. There’s still that chunky gameplay built on a kickass comic book aesthetic, an inspired sense of exploration that goes hand in hand with the puzzles of moderately sized environments. 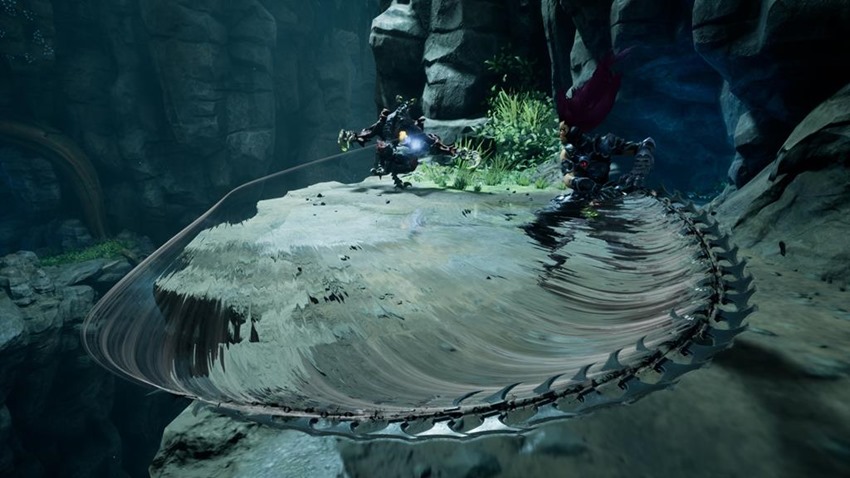 At the same time, Darksiders III’s superb action has a bad habit of being infuriating at times, thanks to technical snafus aplenty which makes the game feel like the equivalent of massaging your prostate with an industrial jackhammer. Darksiders III may be ambitious, but it’s a hunger that dines on half-baked design far too often.

If you’re coming into Darksiders for the first time, here’s the brief skinny: Everything is f***ed. Somebody started the actual biblical apocalypse, heaven and hell wage a new war across Earth and somebody is to blame. That somebody, being one of the titular four horsemen of the apocalypse, the taciturn War. Imprisoned for a crime that he didn’t commit, War’s exile results in his brethren being charged with finding the root cause of the end of times, a scenario that has already been explored in Darksiders 1 and 2. 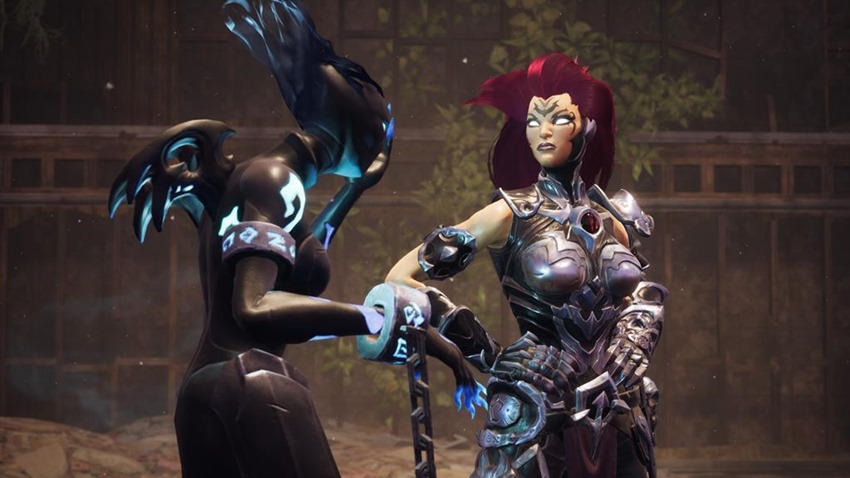 Which just so happen to be out right now, in prettier formats and sillier names on current-gen consoles and PC. While War, Death and Strife get up to adventures of their own on an Earth that has become a new purgatory between the wicked and the divine, the final Horseman of the apocalypse is charged with a mission of her own: Find the Seven Deadly Sins (Not those ones anime fans), put an end to their rampage and keep the balance of power in check.

Enter Fury…Who’s kind of a jerk. Cocksure, arrogant and smug in her abilities, Fury is an adorable jerkass who simply doesn’t give a damn. Her tongue is almost as sharp as her skills, with the Horseman wielding a whip that would give Castlevania’s Belmont’s a rush of blood to the head. Unlike War or Death, Fury is pure offense in a nimble body, throwing away all defense and focusing on dancing around her opponents instead. 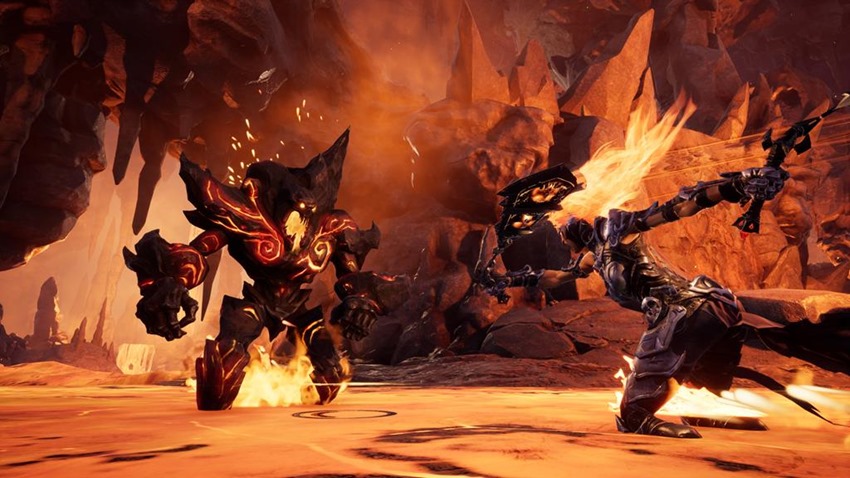 Every well-timed dodge rewards players with a brief window of opportunity to counterattack with blistering extra damage, as Fury’s skill with the whip makes her a formidable force whether she’s fighting one on one or against a mob. At her finest, Fury is an amazing character to control. That agile anarchy she brings to the battlefield rewards players who prefer to strike when the opportunity presents itself, as her more frail form can easily be demolished by demons should players attempt to hack and slash her way through them.

It’s a good thing then that Fury unlocks other abilities as she takes down the Sins. An alliance with the Lord of Hollows results in Fury being upgraded with a quartet of abilities, elemental forms that she can switch between at the press of a button that come with their own unique Scorn weapons: A set of fiery daggers that can burn anyone in her path, a lance that can provide some shock and awe, a mallet that provides gravity-dense hammer time and a mighty sword that freezes those cut by it. 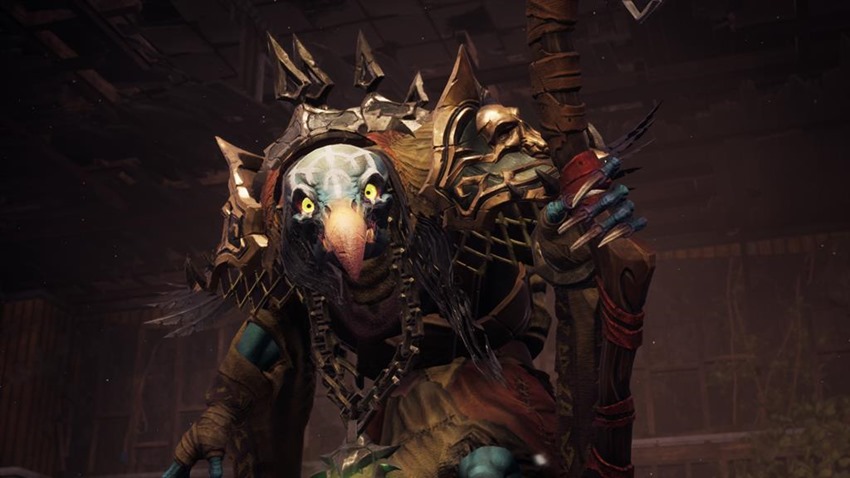 Fury has a few other tricks up her sleeve as well, as she’s able to spend Wrath to unleash bigger attacks using her Hollow gifts, or save up all the Havoc she accrues during her numerous fights and transform into a truly demonic harbinger of the apocalypse, arcane whips snapping shut around those unlucky enough to be in her general vicinity and causing massive damage in the process.

Each Scorn ability also adds an extra layer of gameplay, working in tandem with one another to help players overcome various environmental puzzles. Darksiders has never been shy about how it borrows several elements from Nintendo’s Legend of Zelda series, especially when it comes to dungeon design, and that design aspect is alive and well in Darksiders III. 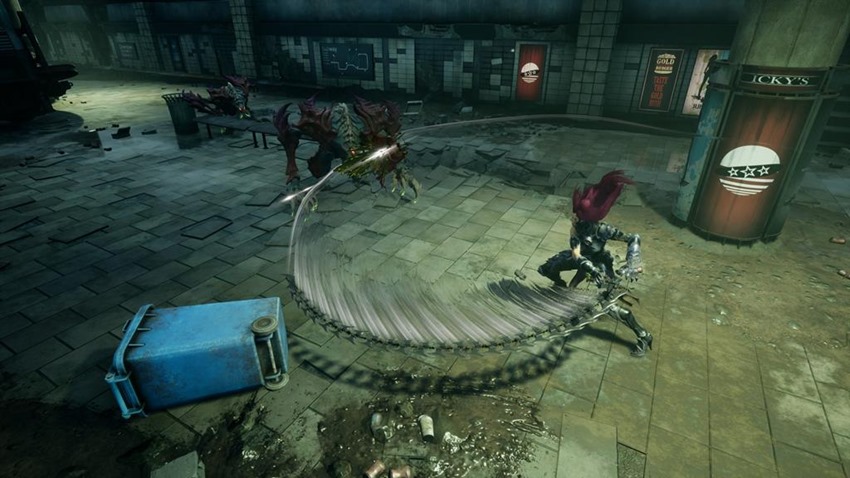 Albeit on a smaller scale, as Fury doesn’t even get the chance to ride her mighty steed Rampage into battle, due to uuuuuhhhh reasons. A smaller scope isn’t necessarily bad however. When design is reigned in and refocused, the end result can actually be a much-needed return to form for any game series that suffers from feature bloat.

It’s a problem that plagued Darksiders 2, a sequel which took an already solid sense of design and went full open-world so many years ago. Instead of the tight and focused path presented in the original game, Darksiders 2 just offered too much with very little primary direction attached to those elements. Darksiders 3 should be the return of the prodigal daughter then, but its fantastic combat and sometimes-obtuse puzzle design are absolutely hamstrung by some of the worst design to ever be felt in a game. 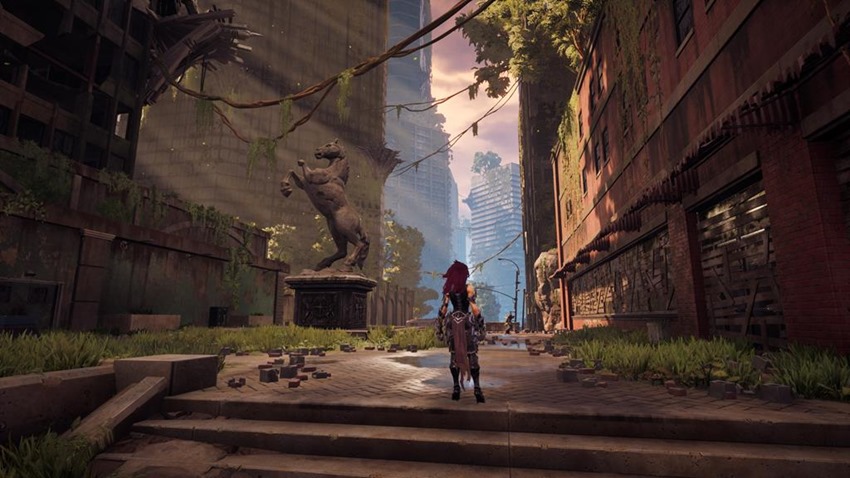 While Darksiders III looks uniquely pretty thanks to the Joe Madureira influenced art, in motion, it’s another story entirely. Hectic combat sequences frequently drop the frame-rate to a stutter that’s worse than King George VI giving a public speech.  That choppiness tends to devolve tense fights into desperate slugfests, each dropped frame subtracting from an experience that should flow fluidly and freely.

That lack of polish extends even further into various visual aspects of Darksiders III, with textures loading in at a sluggish pace, enemies spawning in randomly from time to time and the screen resolution struggling to keep up with the pace. You could chalk that up to the action being too intense at times, but seeing it play out during quieter moments of puzzle solving? Now that’s just annoying. 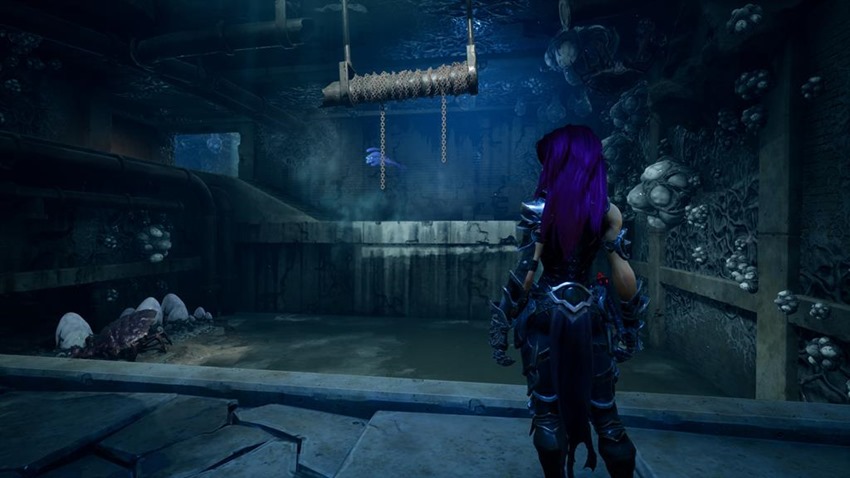 Heck, there was one moment where I legitimately felt like breaking my controller in half. An open stretch of sand, a tornado on one side and several seconds to get Fury from point A to Point B before she gets sucked up in an instakill vortex of death. No sweat, right? For the better part of an hour, I suffered. There was a minute gap between success and defeat, made even worse by the game actually choosing to load more level in and pause your action at the very second you needed to dash.

I’m not making stuff up even, here’s a screenshot of me succumbing for roughly the 23rd time to that damn tornado: 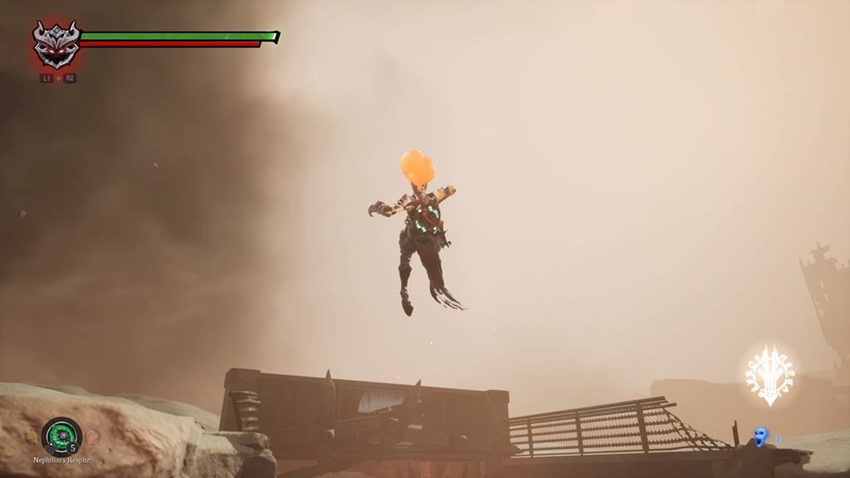 It’s a perfect example of Darksiders III at its very best and very worst: Hoisted by its own digital petard, as I spent an excruciating amount of time attempting to figure out that tiniest gap where I could finally slip through. Its just one example of several in Darksiders III, as another instance saw the waypoint indicator lead me directly to a dead end, leaving me dumbstruck as to how to solve a minute puzzle in front of me. 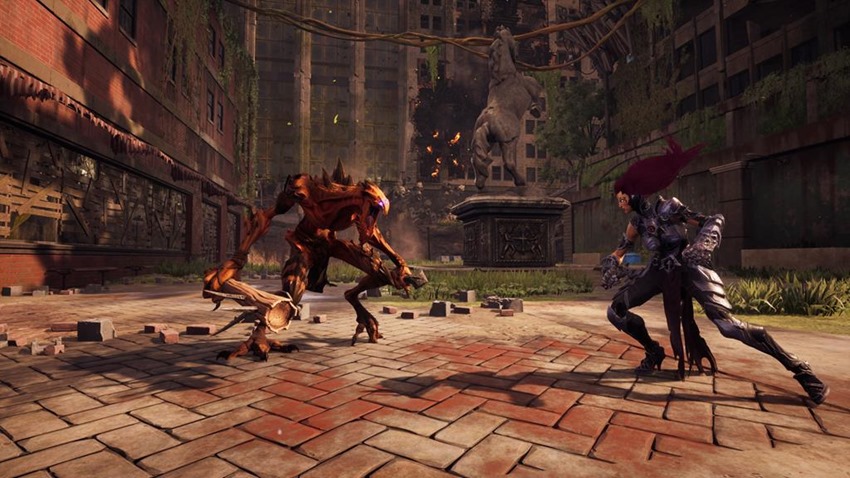 That vague sense of direction just jumps onto a pile of other faults and bugs, including occasional game crashes, broken enemy attack patterns and just piss-poor performance in general. It all adds up to a disappointing experience. I wanted to enjoy Darksiders 3, and believe me there are moments when the game truly shines, but it felt like I was being fought tooth and nail at every corner by the flaws that were inherent in the game system. 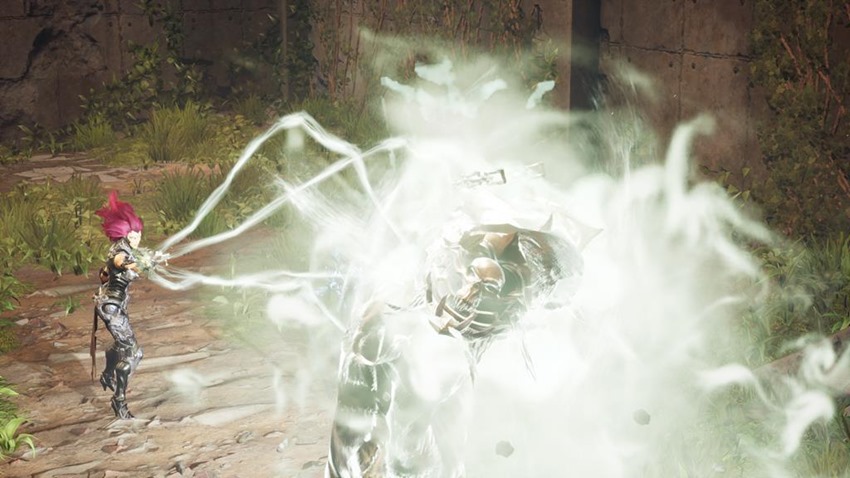 Every time Darksiders III took a step forward, it took two steps back and dragged me kicking and screaming with it as I desperately found more faults with the product. Point is, is that Darksiders 3 feels great, but it also feels incredibly unpolished. It feels rushed, hamstrung and it frequently shoots itself in the foot with its own shortcomings.