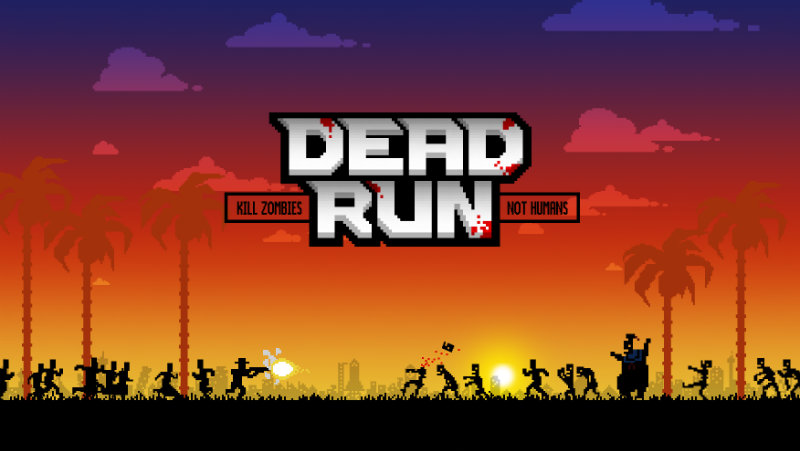 I am sort of terrible at Dead Run. Somehow, I think that’s part of the point. It’s not a game that’s built to be easy, and even with practice you can still have an abysmal round, but I still can’t stop playing it.

Developed by local team Two Plus Games, Dead Run is inspired by Flappy Bird, but barely resembles its inspiration except in how addictive it is. The premise is quite simple – kill zombies, not humans. Moving at a quick clip, your character’s silhouette runs across a changing and colourful backdrop of the apocalypse. Zombies wait in your path and you must use your bat (or later, a shotgun) to kill them. However, at high speeds, zombies can occasionally look like humans, or vice versa. Sounds simple and fun as it is, but there are more details and nuances that make it even better. 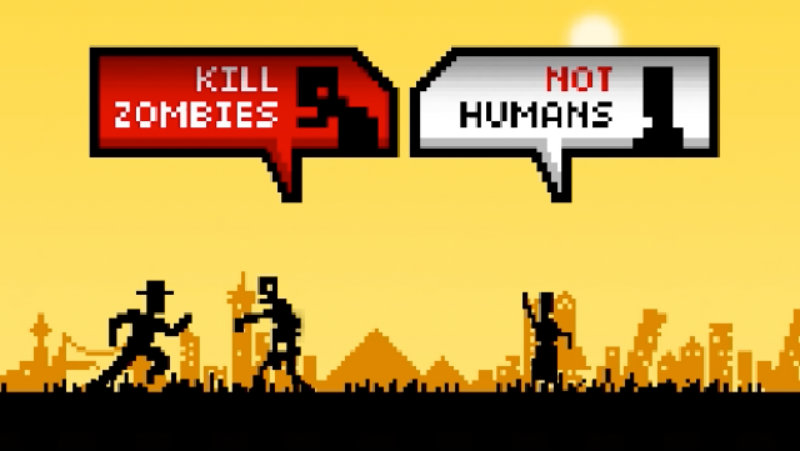 When you die, it for one of two reasons – a monsters munches you, or you killed a human. Killing humans leads to hilarious kill screens though. Ranging from killing William Shatner or Rick and ruining the next season of Walking Dead, each time I died I ended up having a little chuckle. It makes dying just that little bit less frustrating, and adds reason to make use of another feature of the game – the sharing. Of course there is built in sharing in the game, so you can tweet to all your friends about your amazing (or abysmal) record scores.

The controls are ludicrously simple. Tap one button to use your bat to kill zombies, tap another to fire your shotgun. Shotgun shells are acquired by rescuing humans, but you might not want to fire them right away. Sure, they’re great for killing zombies further away but you may need them for later zombies. That’s right, if you get far enough in the game by killing normal zombies, you might make contact with a big boy – a fat, monstrous zombie that can only be killed with a shotgun. Not that it matters at first; you’ll need to make it to at least about 20 humans saved before you see him, no mean feat for me. But I keep trying, keep learning, keep attempting to get better. 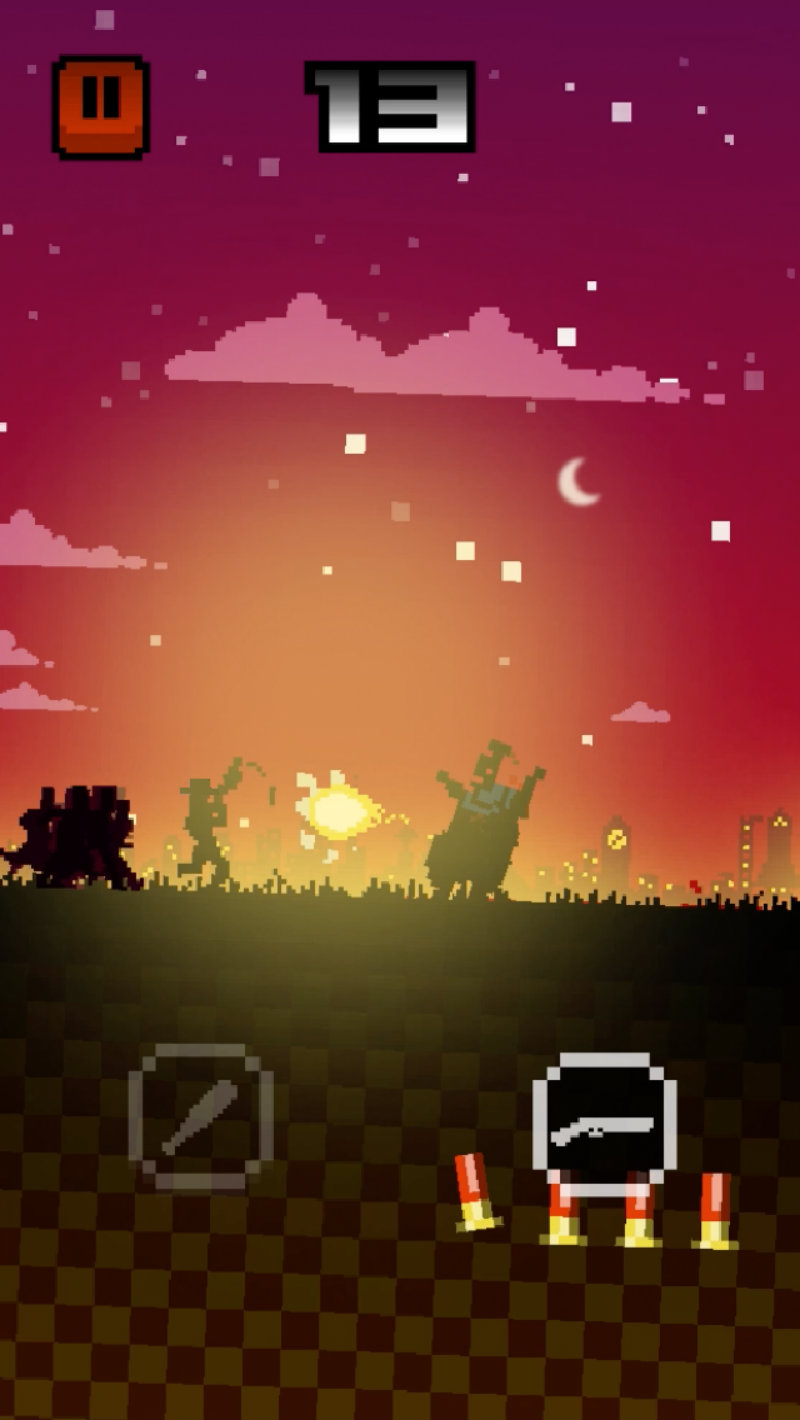 The game’s design is simple, but beautiful. With impressive, hand-crafted pixel graphics design and even a day/night cycle, the game looks pretty, too. The sound effects are enjoyable without becoming overbearing – it’s so satisfying to kill the zombies but so awful when you accidentally kill a human and hear them scream. Oops!

For those who find these quick twitch games easy, don’t worry – this one can become ridiculously difficult. The more humans you save, the more of them will be running behind you, pushing you further towards the right of the screen. This will decrease your lead time in seeing and assessing danger as it appears, making it more tricky. Of course, it becomes even more difficult when you make use of the hats. I was doing a ton of runs with the Flash hat, barely able to manage more than ten humans saved before I would die. Of course, running as fast as the Flash would be a challenge, and since going back to a more normal hat I’ve been back to achieving better scores. 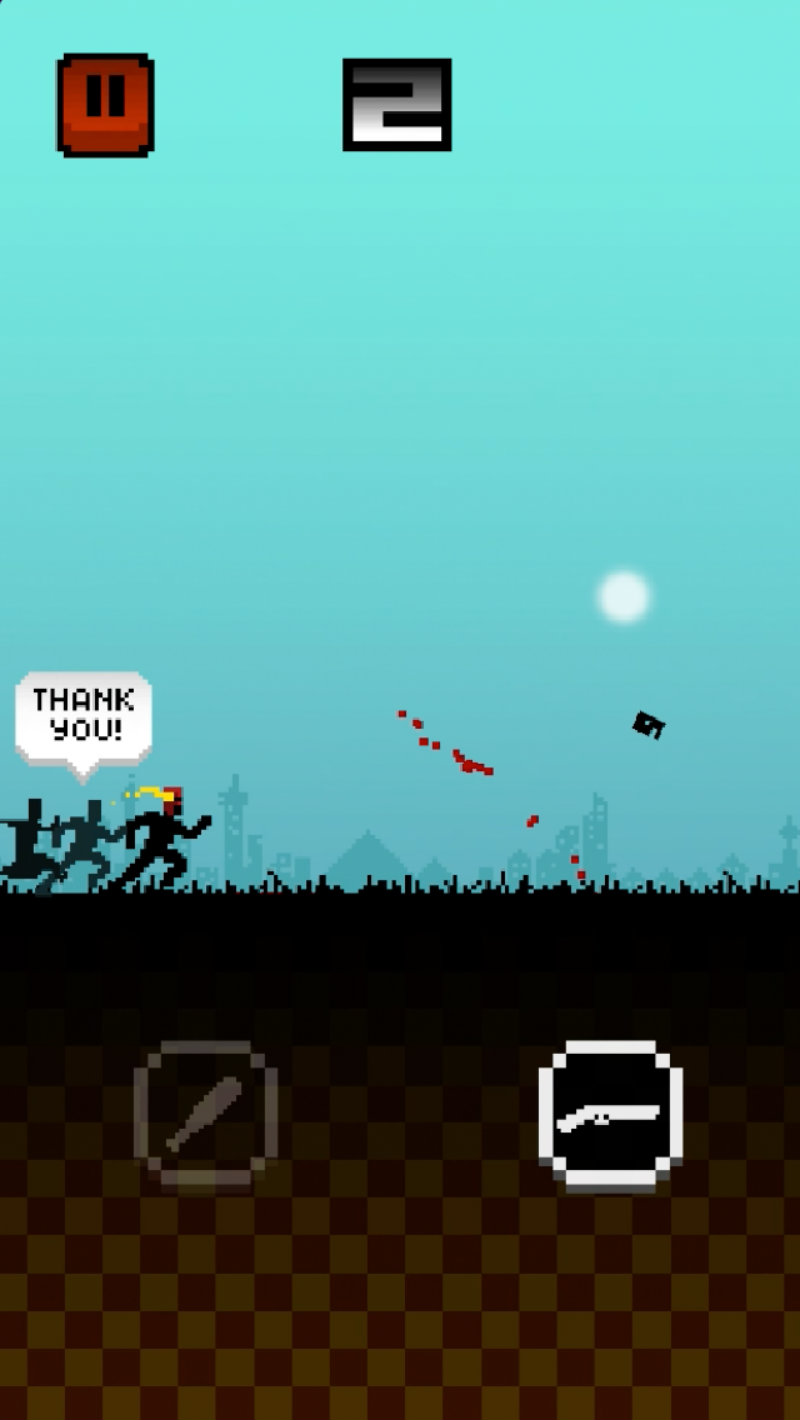 I only wish that points were earned both for saving humans and for killing zombies. Depending on the random run, you might collect a whole bunch of humans quickly and easily, or you might be swinging at zombie heads for days. It would be nice to be rewarded more for killing the zombies, although survival and that satisfying sound effect is probably enough of a reward.

With simple controls, a bunch of achievements and ridiculously addictive gameplay, Dead Run is far too much fun. It deserves to be more popular than Flappy Bird ever was, and for 99 cents on the App Store, it’s worth every cent. One of my favourite mobile games of the year.