Let’s get this out of the way right off the bat: I have no idea how to even begin discussing this game. Actually, that’s not entirely true because I’m fairly confident in saying that Deadly Premonition 2 is not a great game. It might not even be a good game. Quite frankly, it feels like a miracle that this sequel even exists at all.

The first game wasn’t exactly stellar either yet somehow, beyond any reasonable conception, a very small and dedicated group of people fell in love with its bizarre world and characters whose stilted and unnatural dialogue took on a layer of surrealism that would do David Lynch proud. In some people’s eyes, that first game is a strange masterpiece and while I don’t necessarily agree with that summary, I understand the position. That small cult following will no doubt find a similar appeal in Deadly Premonition 2 and I’ll be honest, I went into this game trying to view it from that perspective.

I wanted to resonate with the game in a way that felt meaningful so that I could understand it on its own terms and yet it’s quite frustrating to say that after spending plenty of hours as FBI Special Agent Francis York Morgan (call him York, everyone else does) I really, really didn’t like it. 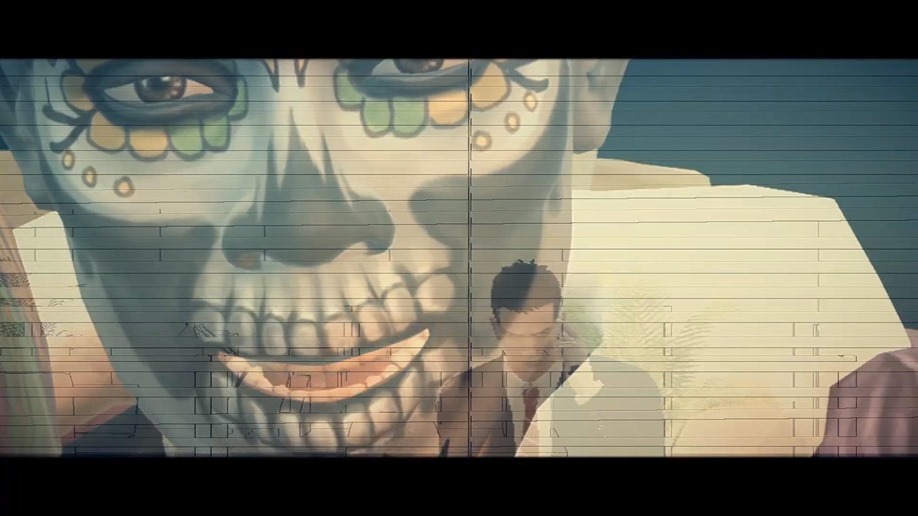 FBI Special Agent Francis York Morgan (again, everyone calls him York) has his vacation in hot and sticky Le Carré interrupted when he sort of just inserts himself in the case of a murdered teenager with links to the town’s richest and most powerful family. It’s a premise ripped straight from Twin Peaks, with maybe a touch more supernatural elements at play. While it’s certainly not an original story by any stretch of the imagination, it’s one that still manages to retain some intrigue with plenty of strange twists and turns, helped along in no small part by its…characters.

“Helped” might be too strong a word but the game becomes far more enjoyable if you really just embrace the irreverent cast for what it is: Pure absurdism. While the town of Le Carré is pretty threadbare in terms of design and general visual aesthetic (more on that in a second), the characters you come into contact with are utterly ridiculous. From a hotel owner that quadruples as the concierge, bellboy and chef (differentiated by different hats) there’s even a town sheriff that just makes up lines from movie trailers. While the actual writing and voice-acting is incredibly terrible, it’s weirdly charming in its own way. It’s like if Tommy Wiseau put on several different wigs and played every side-character in the game. It’s genuinely hilarious.

Yet that’s where my affections for the game came to an end because while the actual storytelling holds some kind of strange magic, the rest of the game is an utter tragedy. The world of Le Carré is bland and barren, with nothing interesting to engage with mechanically or visually. It strikes me as odd that Deadly Premonition 2 went so far to establish itself within a small open-world because the actual dynamics and spacing of the environment make it a tedious bore to traverse. The inclusion of a largish map becomes even more troublesome when you realise how much it tanks the performance of the game.

When FBI Special Agent Francis York Morgan (Call him York, please) travels about on his skateboard, a quirk which is established without so much as a blink of an eye, the framerate hits the floor harder and faster than nearly any Switch game I’ve played. It makes it a slog to play with the controls becoming nearly entirely unresponsive. Fortunately, the game runs slightly better when you enter smaller and more confined areas but even then it’s not fantastic because the camera just…dies. Unable to properly manipulate your view when stuck in some of the game’s tighter shooting gallery locations, combat turns into a monotonous and uncomplicated grind.

When Deadly Premonition 2 is determined to throw you into some combat, something it’s mercifully conservative about, the actual pace of the experience picks up but only by the bare minimum. Combat is seemingly refined to Singularities, other-worldly locations populated by strange demons wielding massive scissors and paralysing crabs that spawn from large men chained to doors. It’s weird and at least painless, as the game makes combat as simple and as unremarkable as possible, with a very traditional point and shoot weapon design and a handy lock-on that annoyingly needs to be recharged. It’s bland and boring, often padded out by extended levels that go on way too long to hold any kind of engagement. The only kind of payoff to slogging through combat as stiff and stale as Deadly Premonition 2, is that it offers a twist to the overall mystery but even then it’s not exactly a substantial reward for enduring all of that misery.

I wanted to enjoy Deadly Premonition 2. I tried to enjoy it. As a fan of the absurd and the surreal, I was really hoping that aspect of the game would outweigh the negatives yet as it stands right now, I would rather have spent my time just watching Twin Peaks. Deadly Premonition 2 is a bad game, of that I have no doubt. Just looking at screenshots of it should be an obvious indicator that it’s not a stellar experience. There’ll be a group of folks that somehow tolerate all the lacklustre elements and enjoy the very dulled and unimpressive pearl buried deep, deep within the game’s bowels. Yet those people are weird. You’re weird and Deadly Premonitions 2 is a bad game. I’m confident in saying that FBI Special Agent Francis York Morgan’s latest adventure is as hollow and disappointing as I’m sure most people expected. Please, for the love of Lynch just call him York.

Dead Premonition 2: A Blessing in Disguise wants to revel and self-praise its own absurdist nature, but at the end of the day the actual game attached to all the strange dialogue, mechanics and gameplay is painfully frustrating.