Home Gaming Dedicated Destiny players are getting a neat reward

Destiny, a game in which I only just learnt that Scorch Cannon rounds can be charged to spread their payload over a massive distance, is about to get bigger in September. And to celebrate the year one players who stuck around and built their Guardians into legends, Bungie is rewarding them.

With an emblem. And yes, I freakin’ want it, to the point where I am making plans to spend entire nights earning it, because I clearly have a problem. Clearly.

Destiny’s Laurea Prima emblem won’t just be handed out gratis however, as players will have to work their asses off in order to earn it. Truly dedicated players however, most likely have it already. Here’s what you need to do, in order to achieve all Triumphs:

I’m already almost halfway there, with the Bungie site having a tool that keeps track of my progress. Check it out: 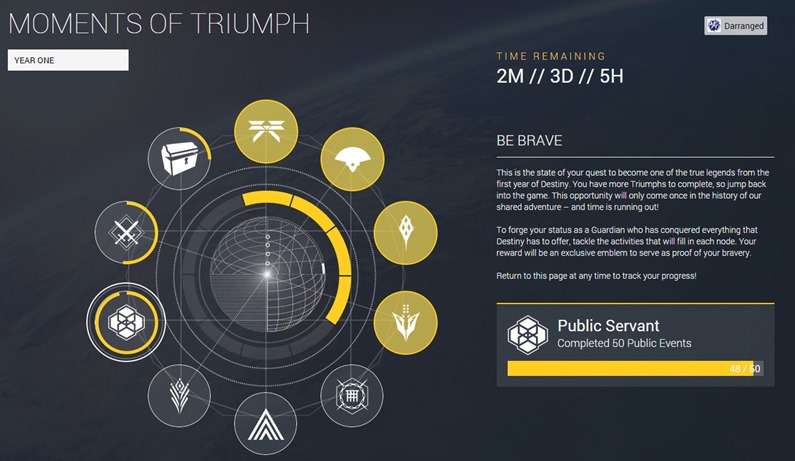 So what does this emblem do then? It’s purely for bragging rights, that’s what it is. Bungie claims that this massive quest will only be offered once, with the cut-off date being September 9. Bungie is however also teasing that anyone who holds the emblem, “will be rewarded” when The Taken King launches.

Some of those tasks are hellishly difficult. Crota and Skolas raids on hard mode will most likely require a ton of co-ordinated teamwork and skill, something which I’m going to fine-tune my Defender Titan for. Lean on me, when you’re not strong, I’ll be your friend, I’ll help you caaaaaaaaarry on!