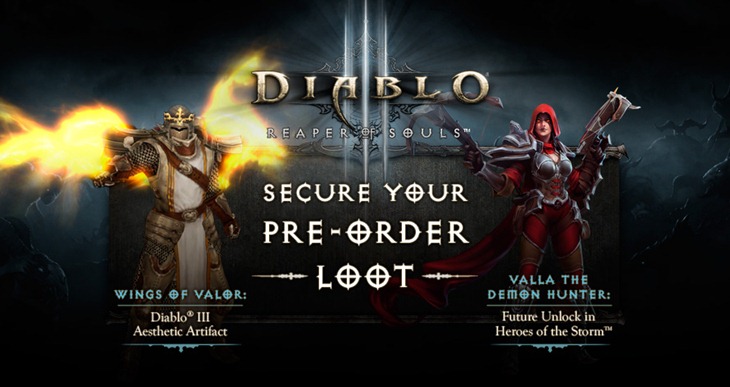 It’s almost time, oh faithful crusaders of the Blizzard brand. Diablo III expands like a waist line during the festive season with the Reaper of Souls add-on this year. And if you pre-order it, you’ll get a bonus or two.

Pre-order Reaper of Souls on Battle.net , or do so with a redeemed retail key on or before March 31, and you’ll get the following digitial goodies:

For those early adopters who are gnashing their teeth right now, fret not. If you’ve already pre-ordered on Battle.net, you’ll get the Wings of Valor on March 20. As for Valla the Demon Hunter, I hope you lot are patient.

Heroes of the Storm has been in development for ages now, and despite the fact that the version that I played felt pretty much complete, you all know how Blizzard won’t release a product until they’re satisfied with it.

Reaper of Souls however, is out soon. March 25 to be exact. The PC version looks fine and dandy, but personally, I want to get my grubby paws on the complete Ultimate Evil edition for the PlayStation 4.

As for the beta testers out there, don’t forget that the reset button is being hit soon, which will set your character information back a tad. For everyone else, ready your bandwidth for Patch 2.0.1 which will most likely be present just before the expansion launches.