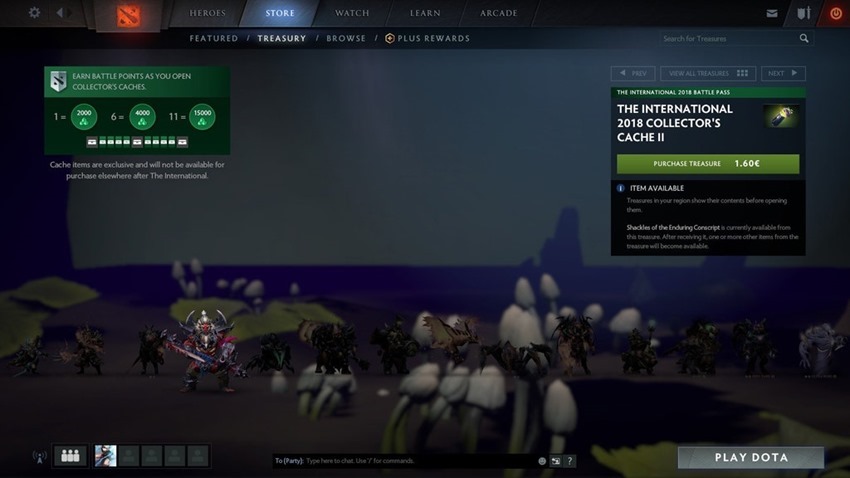 Earlier this year, Valve halted player trades for Dutch CS: Go and DOTA players and disabled CS:GO loot boxes completely. Now, loot boxes are back for DOTA players in The Netherlands, but they now show their contents before purchase.

According to a Redditor named Larhf, the Dota 2 Treasury for Dutch players now has a notation saying that “Treasures in your region show their contents before opening them.” This is obviously Valve’s way of skirting Dutch law to get around accusations of gambling, but it hardly solves the issue. All it does is make you effectively gamble on the next chest. You may see what’s in the one that you’re set to buy, but you can’t skip it, and have to buy it to see what the next one may contain. The odds of the system haven’t changed either, so the chances of getting a high-rarity item are still small, so players will probably still have to buy multiple boxes to get anything they actually want.

On top of that, Dutch players can’t buy multiple boxes simultaneously; they have to be bought and opened one by one. It does mean players likely have to spend less before getting something that they want, but the randomisation and gambling element is still present – it’s just been obfuscated.

It’s also apparently nixed the pomp and ceremony of opening DOTA 2’s loot boxes. You’d otherwise get a flashy animation to tell you which silly randomised cosmetic you’ve just paid money for. Now you know before you’ve opened it.

I suppose seeing that the net loot box contains nothing but rubbish might spur some people to just close everything and get back to playing. Or, it could compound the problem by having people keep spending until they can see that the next one’ll give them something tasty before they’ve opened it.

Either way, it just seems like moving the goalposts to keep legislators happy. What do you think though? Is this a good move to start removing the scourge of loot boxes and cosmetic microtransactions – or just a weird sort of delayed gambling?