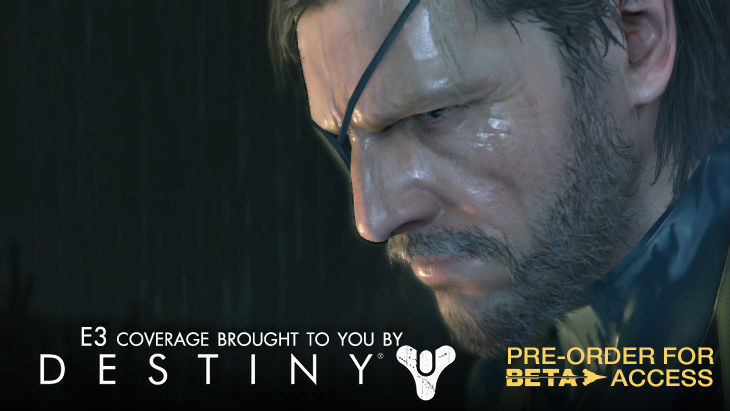 The latest iteration of Metal Gear Solid offers the most realistic and engaging open world experience – take on each aspect of the game however you see fit. Too good to be true? No! This game looks like it will actually deliver on its promises.

I got some eyes-on time with MGS and what I saw seriously impressed me. The game takes place directly after Ground Zeroes and the part we saw was in Afghanistan, where it’s the player’s job to bring the legend back to life. You will need to rally your men, grow your supporters and rescue your friends.

After a brief cut scene (which shifted seamlessly into gameplay), the world was the player’s oyster. During the demo, they showed off how players can ride up to outposts on a horse, and even hang off the side of the horse so that they are hidden. After taking out some guards, we used the Fulton recovery system, a strange weather balloon-esque device, to transport them back to the mother base. These transplants can then be set to work, provide resources and help to expand the base.

The realism in the world is incredible. While riding the horse, it actually paused to defecate. Then, a sandstorm blew in – all part of the dynamic weather system. The graphics are phenomenal; during the sandstorm the sky first went dark, then the sand could be seen blowing in the distance, and eventually was kicked up in the foreground. This dynamic weather can add to the realism, too – during profound weather events, the Fulton will be influence and things can be blown off course on the way to the mother base.

Big Boss also has some new tricks up his sleeve. Well, quite literally, as he now has a prosthetic hand. This could be used quite effectively while in stealth – the knock ability doesn’t need to be used against a wall, he can use it anywhere now.

Time can play a crucial role in the game. While seeking to infiltrate a base, you may want to wait until the guards have changed shifts/locations, or even gone for a nap. However, standing around and waiting can be irritating, so MGS V added in a cigar to help pass the time. While smoking your e-cigar (that leaves no trace and only emits holographic smoke), time moves more quickly so that you can rapidly shift between day and night.

Those familiar with the franchise will be happy to know that the cardboard box is still a thing. You can hide in the box and use it as part of your stealth infiltration. However, it also boasts some new features. You can now pop up out of the box to shoot, easily re-entering stealth mode without worrying about equipping or unequipping. You can also choose to vacate the box – if you’re spotted (a moving box is still something curious), you can jump out of the side of the box, leaving it there as a decoy for suspicious aggressors.

The mother base isn’t just an abstract place to send resources and from which to receive drops. You can travel to the mother base between missions, and it is fully customisable. Starting as a simple platform/oil rig in the ocean, each player can add assets, build new platforms, research technologies and expand the base. Each base will be unique and specific to that player’s build strategies and design. It was really quite cool to see the guard, container and even goat that we sent back to the base present when we went to visit.

The game has a ton on offer – I really wished I could have gotten some hands on time with the game. The world is so massive (200 times the size of Ground Zeroes) and I really wanted to see what it was like to play for myself. I’m impressed with what I saw and curious to see more. My interest has been piqued.