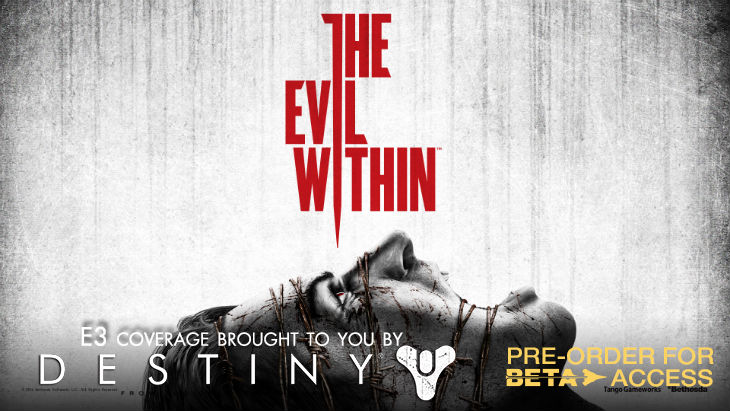 The Evil Within in a survival horror game that promised to get in your head, give you minimal resources, and return players to that absolute sense of horror felt in games of the past. But can it deliver the fear?

Bethesda’s The Evil Within is dark and gritty with plenty of excellent design to add to the ambiance. It takes full advantage of the latest graphical and processing abilities, bringing the horror to life in all its gory, distressing and creepy glory. However, I’m not sure that the horror is fully present.

I had the opportunity to play two demos for The Evil Within – one took place during chapter four and the other during chapter nine. While there was a quick presentation to try to facilitate survival, the PR people did explain to us that dying is part of the game and the experience. Some enemies are very difficult to kill, most need to be burned to be prevented from coming back to life, and there are even some who cannot be killed. Ready for an old-school thrill, I happily took hold of the controller and prepared to need bleach for my brain and undies.

During the first part, I was accompanied with the crazy doctor. While the controls were fairly standard, I did find it a bit tricky to get used to them – I wanted to equip certain things and I found it difficult to do so. Despite my best intentions to wander around with my knife in hand, it seemed that I kept reverting back to bare knuckle boxing in my moments of need.

The atmosphere is expertly created. There are whispers and creepy noises coming from off camera, and even an eye on the top of the screen to indicate the enemy’s awareness of you (depending on the difficulty level selected, this might not be visible). There are items covered in sheets that look like ghosts, and you will probably find yourself jumping at shadows as you move from room to room.

However, despite the definite ambiance, the game couldn’t sustain the horror. I was killed by a particular enemy during one play through, so the next time around I took a different route to try to sneak up on him and kill him that way. However, my equipment issues certainly continued to pose a problem. By my third attempt, I wasn’t afraid of anything, the ambiance utterly destroyed – it had become predictable by then.

Later on in a different demo, I encountered an enemy that I couldn’t kill, prompting me to run in the opposite direction to try to find a place to hide. Despite the utter hopelessness in that moment, I was beyond the point of panic – it wasn’t scary, it simply felt like an exercise in figuring out the level design.

I’m not trying to imply that there were no moments of fear for me – the first time I heard a whisper coming from behind me I certainly jumped. However, by the second and third time, the effects were wearing thin, and after more time with the game, the fear had basically worn off. Until one of the PR people came up behind me. Now that was a jump scare!