Evolve is one of those games picked up from the smouldering embers of THQ’s demise early last year and I’m increasingly starting to think 2K games made a wise purchasing decision.  You may not recognize its developer, Turtle Rock Studios by name, but you’re almost certainly aware of its biggest game; the co-operative zombie-shooter Left 4 Dead. Evolve takes the basic premise of that, as a co-operative shooter and  – I hate myself for saying this – evolves it. And it’s fun.

It’s a class-based shooter in the vein of Team Fortress 2, with as much emphasis on team work – only instead of two equally matched sides, Evolve pits 4 player-controlled hunters against one great big alien beasty and tasks them with killing it, before they end up as the prey. 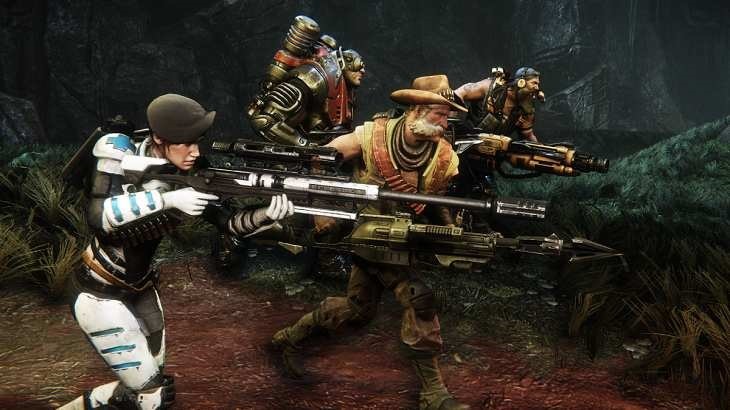 The hook here, and the reason the game has its name, is that the monster evolves, becoming stronger, faster and more dangerous at each stage like a dark and deadly, nightmarish Pokémon. The monster is supremely agile, and devilishly quick and though the early game favours the hunters, as the game goes on the hunters need to work even more closely to bring it down.

It’s taking the idea of an epic, changing boss battle, and giving control of that boss to a human player for a unique 4v1 experience.

Each of the classes is equipped with a range of weapons and abilities and has a distinct and vital role to play in bringing the creature down, and the loss of any of them spells trouble for the team. Each game begins  with the monster getting a head start. Hunters are then dropped in to the world and must track the beast, using environmental cues. Blue footprints show where the monster’s been, and it’s necessary to listen to and watch everything. Ruffled birds, swaying tress and the monster’s distinct growls give away its position, leaving each class to use the tools at its disposal to hunt and slay the belligerent behemoth. 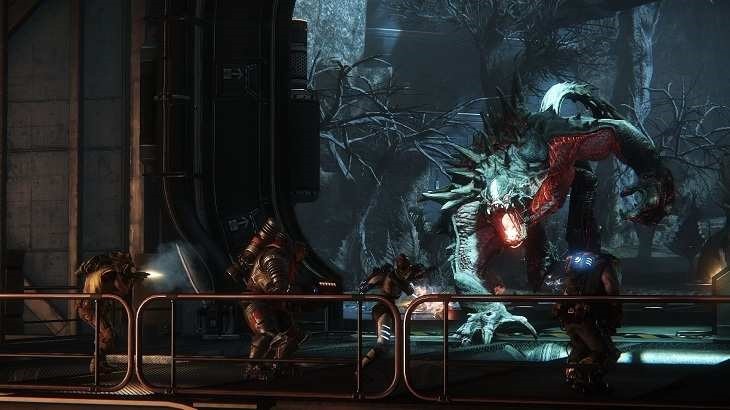 Hunters have to track the monster through a huge map, with its own hazards. There are other, deadly NPC monsters and creatures.  Traversing the map is made easier with the hunters being armed with a metred jetpack that adds both verticality and strategy to the game. Perks – for both hunters and monster – can be attained by killing perk-carrying monsters creatures

Let’s take a look at each of the classes, and what they can do – and talk a bit about how they have to work as a group to have any chance of success. Bear in mind that the game will ship with a number of characters in each class, all of whom will have slightly different load-outs and attributes. 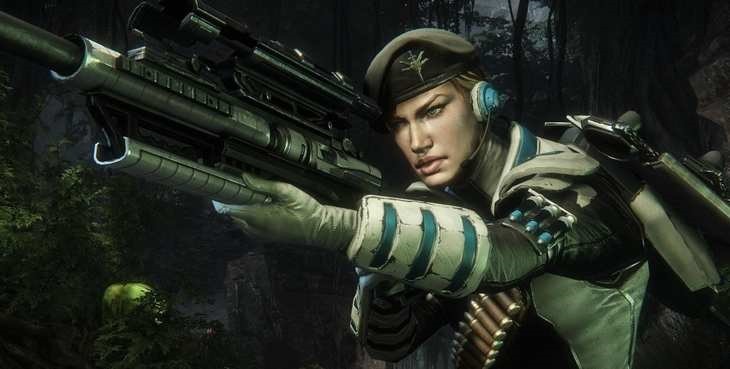 In my very first game, I played as the medic, who I was told was one of the more important classes. With no way for players to heal without the medic’s assistance, the game sways rather heavily in the monster’s favour.

Val’s primary damage dealing come via a long-range, armour-piercing sniper rifle, which is immensely useful for creating weak spots in the creature’s armour. When it’s been hit with a marking sniper shot, small holes in the beast’s armour allow the other to aim there for damage buffs. The medic is also armed with a tranquilising dart gun, which not only temporarily marks the monster, but slows it down as well.

Of course, the medic’s primary function is not one of offense, but healing. To that end, the medic has a medic gun that functions very similarly to the one found in Team Fortress; it fires a beam of healing energy that heals teammates. It has long range, so the Medic’s best bet is to find a high, safe spot to keep everyone else alive. She also has an area-of-effect health blast, that acts a a team-wide stimpack.

Yes, I died – but I managed to help keep the team alive juuuuuust long enough to blast the monster to bits. 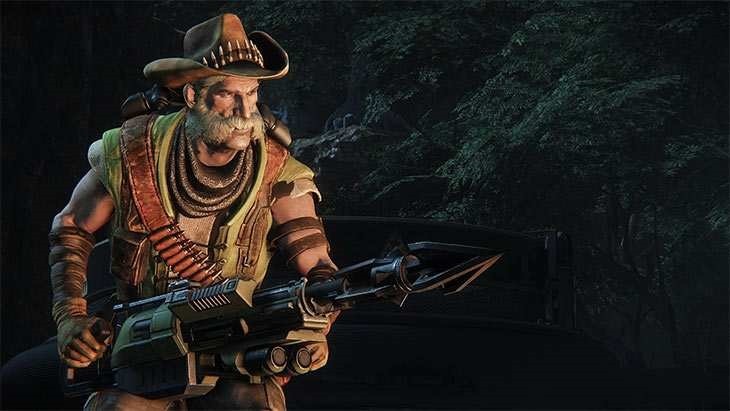 Griffin’s role as the Trapper is to help detect and restrain the alien. He’s the guy whose job it is to help the team find the creature – and it’s the class I struggled with most, given my propensity for running around and shooting everything. Griffin is equipped with 8 sound spikes that he can place in to the ground. These create a small, sound-sensitive proximity radius that will alerts the players to the monster’s location. He’s got just 8 of them, so he needs to be rather judicious in their placement.

He’s also got a nifty harpoon gun that can be used to tether the creature to him, slowing it down, making the monster vulnerable to team attacks. A shot to the back is great for getting a team-mate out of trouble too, as the alien will have to turn around to melee and sever the bond. As for as offense goes, Griffin has an SMG that does absolutely nothing special.

His skill though, is vital. The mobile arena lays down a temporary domed containment force-field that keeps any wildlife, including the alien, inside. This makes it a much easier target, crippling its range of evasive skills.