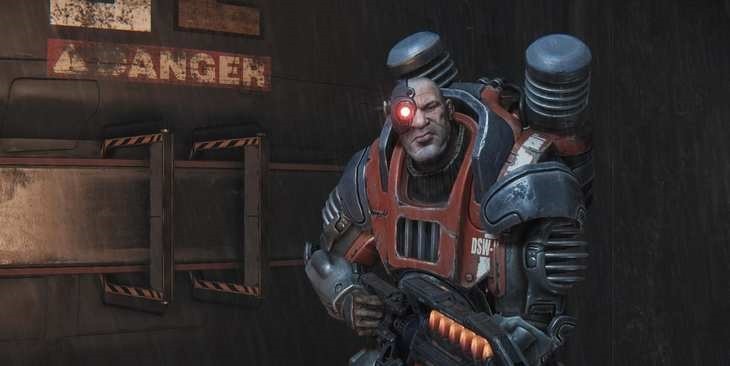 Zoe, meanwhile, had her first game as the assault class.

As the name implies, the assault is crucial for dealing the big damage and taking down the monster. He is equipped with two big guns – the Assault Rifle for long range and the Lightning Gun for closer combat. I particularly liked the Lightning Gun, mainly because it could quickly take down the monster’s shields. Arc Mines are another tool at the Assault’s disposal – these can be placed around the map to help the hunters find the monster, or used strategically to cause extra damage in key areas. I loved leaving them around the generator or any killed beasts to surprise the monster. This tank also has his very own Personal Shield which makes him temporarily invulnerable – excellent for when the monster is flailing away on top of you.

The learning curve is tough for Assault. You will be working with your team to track the monster, but you don’t really have anything to use to keep him snared once you find him. This is part of the balancing of the game – your team mates need to lock the monster down in one place so that you can let rip and deal a ton of damage.

Thanks to his massive size, there is a difference in mobility for Markov. He simply isn’t as fast as his team mates, and that jetpack doesn’t last quite as long for him. Of course, as you learn jetpack management, you can still leap between rocks. It just takes a bit more practice. He is a must play for all you run and gun players – it’s so satisfying to take down the monster’s shields and watch him try to run away as you empty all your clips into him. 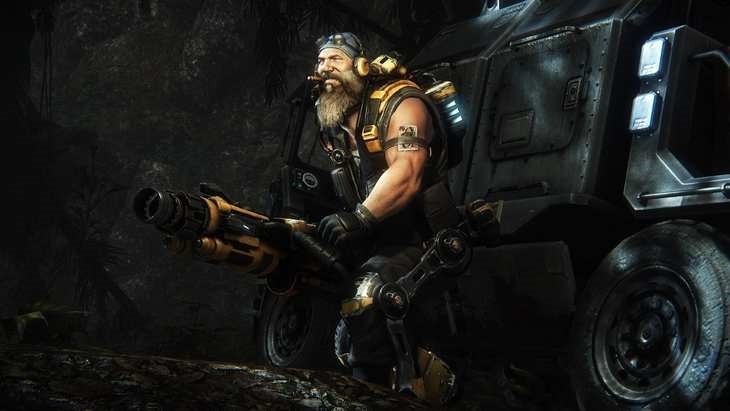 Support works in tandem with the healer, but he’s focused on reducing how hard his teammates are hit. Friends hit by his most valuable weapon, his shield gun will enjoy a brief moments respite from any damage dealt. He’s also able to cloak team members for a quick and sneaky getaway when team members have been disposed of and the best option is retreat.

His primary method of offense is a powerful laser cutter that’s not only handy for damaging the monster, but also for pinpointing its location. When discretion is no longer an option, our support character is able to deploy an orbital barrage; a battery of explosive that rain down from the sky to inflict massive damage on the monster. It takes a while to drop though, and is best used in conjunction with the Trapper’s handy harpoon gun.

Playing as the alien monster is an entirely different experience. 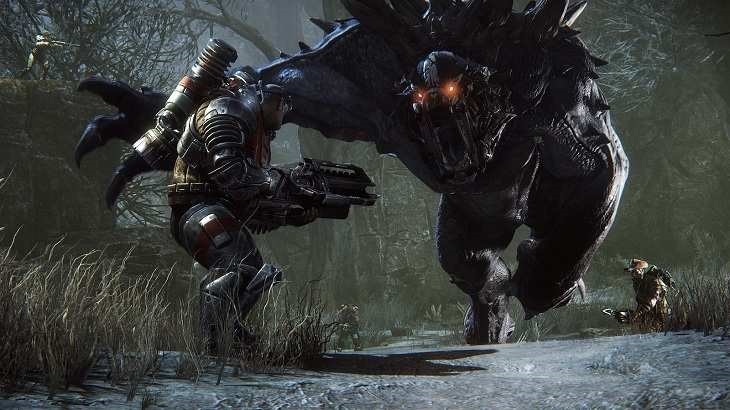 Zoe got to play as the monster. We got to kill Zoe.

Goliath is a complete difference to the hunters. Unlike the hunters, who see the world from a first-person perspective, the alien is played out in 3rd person. The first thing that struck me was his absolute mobility. He could jump and grapple his way through the environment, making traversing the map an absolute dream after the smaller, slower hunters.

The goal also tends toward a totally different style of gameplay. As the monster, you need to eat the area’s wildlife in order to evolve, all while evading the hunters who can track you. I’d often pass up an easy meal because the animals were near birds, which would fly up and alert the hunters to my location. It’s a much more stressful experience, knowing that you’re being hunted. It’s also far too satisfying making them lose your trail as you run through water or hide under bridges to avoid the hunters.

When trapped, Goliath is a formidable force, using flames, punches and rock throws to assault the hunters until he can make his escape. I really liked the tiered approach to monster powers. Instead of starting the game with one or two maxed out powers, you begin with points to allocate – and no matter how much you evolve you can never fully level the monster. This means that players need to pick and choose their powers carefully, selecting the abilities that they find most useful and adding points as they evolve.

After playing the monster, I certainly needed some time to come down. It is a stressful and exhilarating experience – to have all that power and be hunted gives a strange kind of rush.

It’s all about balance 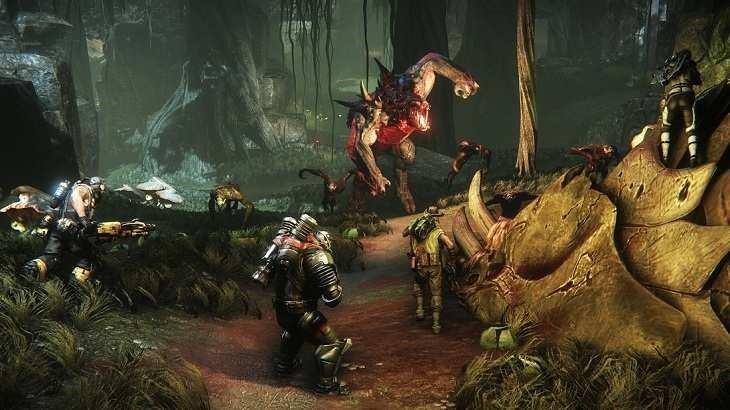 What struck me most about evolve, was just how balanced it all seemed to be. The entire game is about balance; using the right weapons and abilities at the right time, working together. Neither side seems overpowered, or underequipped. Even playing as the monster is more nuanced than you imagine. At first glance, being the monster appears to be very one-dimensional – but it’s not. You can sneak about like a giant alien ninja, or go on a full-out assault. Balance is key, as we heard from Iain Willows, 2K Games’ international producer.

“Think about what we’re offering here. We’re offering on the one side a giant, evolving monster and then on the other side is four hunters with different abilities. And balance is key. We know that this type of game, it has to be completely balanced and that comes about from testing the crap out of it. So, internally, at 2K, and Turtle Rock focus testing; we have very intricate telemetry data that we rely on to tell us what’s going on, and not be afraid to make changes to the game in any way.”

Balance is indeed key – and it’s that balance that keeps Evolve a tense, engaging and above all, fun experience. If you enjoy co-operative gaming – the sort you get from games like Team Fortress and Left 4 Dead – then Evolve is something you definitely want to keep an eye on.

It’s coming to PC, Xbox One and Playstation4 later this year.