The world is being overrun with giant armoured ogres from another world, hellbent on destroying humankind. What’s a Sentinel – one of the last people capable of vanquishing such a gargantuan foe to do? Slice their damned heads off, of course.

In Extinction from developer Iron Galaxy, you’ll play as Avil. One of the last Sentinels: a specially trained member of an ancient order with knowledge of the Ravenii – those giant ogres – and how to kill them. 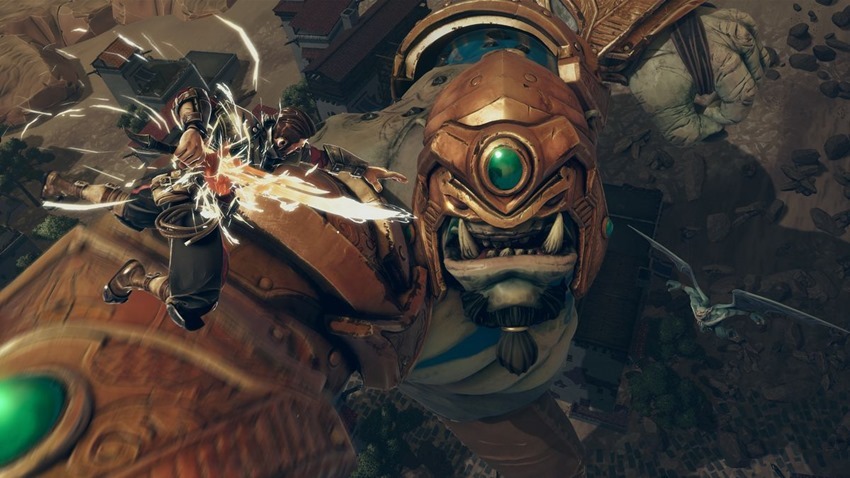 The whole thing is set in a medieval fantasy world with the associated trimmings you’d expect. There are villages and fortresses, barren plains and castles – the landscape ravaged by hundreds of years of war between different human factions. When an invading horde of ogres attacks, new alliances need to be forged to stop civilisation’s downfall. While the ogres resemble the sort of brutish orcs you’d find in fantasy, they’re a highly organised, intelligent and structured horde.

To take them down, Avil can use his magical Rune Strike Powers.They slow down time and allow him to pinpoint his attacks, each slash of the blade slowly powering up his rune energy and when sufficiently charged, he’s able to strike a killing blow that severs Ogre heads from Ogre shoulders. There are of course, a few impediments, and it’s not just a case of climbing a beast and delivering a killing blow. 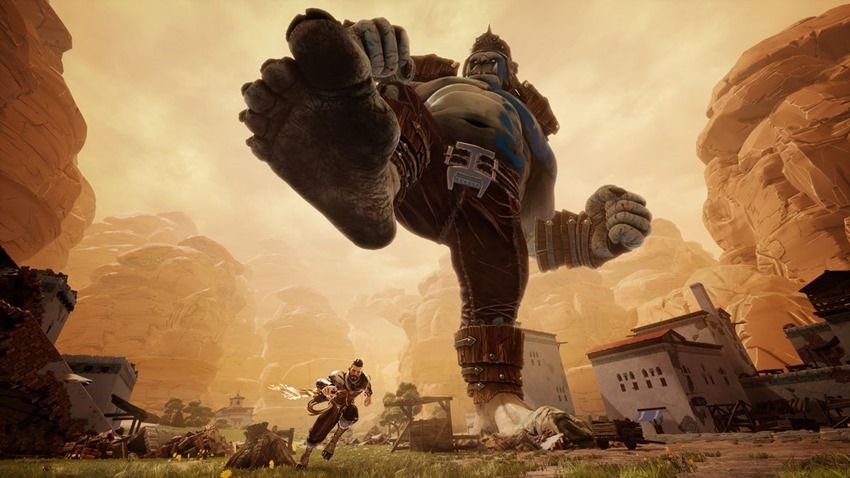 Charging Rune energy is slow, though there are a number of ways to speed it along. Avil is able to rescue civilians by charging up escape portals that dot the map. Once charged up, the humans are magicked to safety, and each time this happens Avil’s rune power is increased a little. The same goes for completing any other mission objectives and killing the significantly smaller minions on the ground and in the air that are trying to stand in his way. It’s in dispatching these smaller monsters who’re attacking people where Extinction’s fabled combat comes into play.

Iron Galaxy knows a thing or two about fighting games, so they’ve appropriated a few genre mechanics for their action combat. There are gameplay ideas like cancels and chains that become increasingly complex as you unlock increased combo abilities. There are direct attacks, area of effect attacks, aerial chains and combos, along with dodges and cancels into and out of moves. 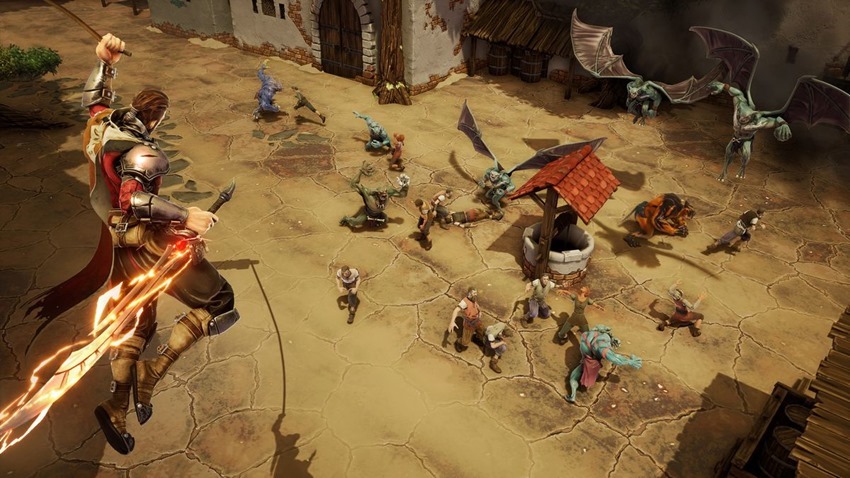 More important to your success (and the fate of the world) to my mind are Avil’s traversal options. Avil’s primary means of motion are dashes, jumps and whip-swinging. It’s often pivotal to get as high as possible, to get into advantageous positions from which to take down the lumbering beasts who tear down buildings and crush through villages as if they were made of paper-mache.

When it comes to fighting the ogres themselves, it’s easy to recall games like Shadow of the Colossus or the obvious influence of Attack on Titan. They’re a towering menace that individually become trickier to take down as they vary the sorts of armour that they don. While earlier ogres have simple coverings that a rune strike or two will remove, later giants require far more planning and thought to bring down.  Some armoured giants have locks that need to be destroyed before they’re vulnerable, while others do damage to you, and others still are wholly impervious to rune strikes. In that case, you may need to come up with other strategies to bring them down. 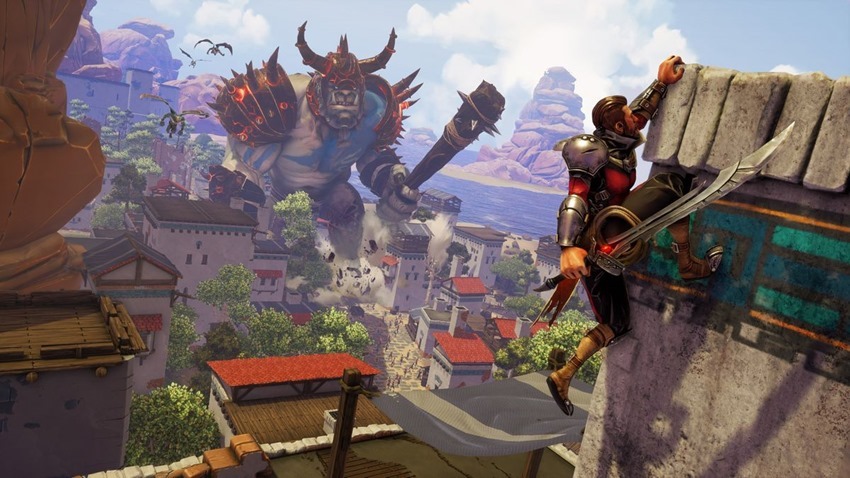 And yes, killing ogres is undoubtedly fun and probably my favourite thing about the game so far. There’s a visceral delight in lopping off ogre limbs (which regenerate), building up your rune Strike powers and going in for the final blow. I’m a little less convinced about the game that’s built up around that though. The core loop of building up power by charging up portals, killing minions and then taking down giants can become repetitive and tiresome. The game is structured around individual missions rather than some overarching game world, with a few qualifiers and extra bonus objectives for each mission. 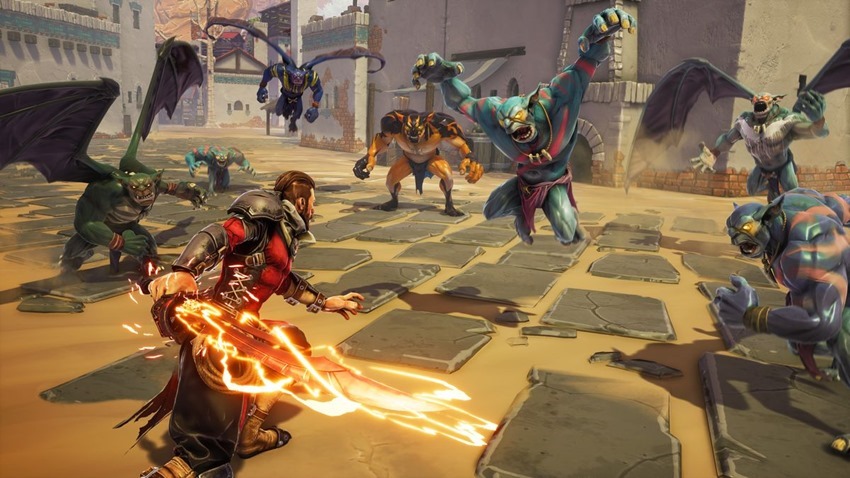 Yes, there is a bit of mission variety thanks to its blend of procedural and curated level generation. You may have to protect or escort people, protect watchtowers, or complete other objectives within time limits. It’s very much skill based – though sometimes it feels like you need otherworldly skills when there are four Ravenii on opposite sides of the map that need to be killed, but there just aren’t enough resources to power up your attacks left on the map. the timer’s running down and the village’s health – a little reminiscent of Superman games – has run down to 4%.  Thankfully there’s a skill tree that lets Avil upgrade his abilities a little, letting him slow time more, power up his attacks a little quicker, and jump around like a ninja. 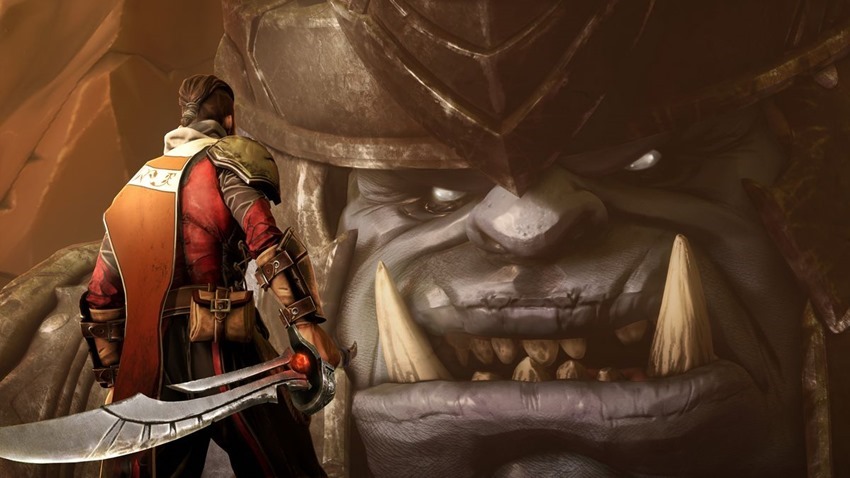 There are also a few modes outside of the apparently 12-hour long main story-based campaign. There are daily challenges with leaderboards, a “survive for as long as you can” extinction mode and a seed-generated skirmish mode. It’s a fair bit of content, but the core loop just feels like its missing a certain spark to me.  It’s fun in short bursts, but not something I’d personally be compelled to pay full price for.  at least, not for the R1129 the game is on pre-order for on the PlayStation Store (it’s not available on to order on Xbox One or Steam just yet).