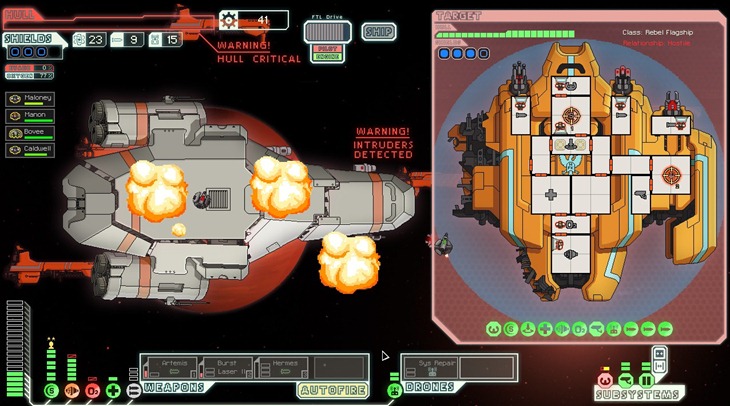 Honestly, I know very little about FTL: Faster Than Light, except that it makes Zoe froth at the mouth with joy. I do know that the game has done well and more than just one American in my social circle has love for it. FTL is getting a free expansion soon. Here’s what you can find inside of it.

The Subset Games expansion, detailed on the official website as FTL: Advanced Edition, will throw in new systems and subsystems such as hacking, mind control and the clone bay. For those of you who are as clueless as I am on a day to day basis, FTL deals with space, fire and seeing just how much of it is flammable as you struggle to survive in your fragile ship.

New systems such as the clone bay and med bay, will allow players to replace their currently deceased crew members and retain at least some skills. “The goal of the Clone Bay was to really disrupt the core way you play the game,” Ma wrote on the site.

You’ll be able to send crew off into dangerous situations without fear of death. Giant alien spiders will no longer be the terrifying, unstoppable force that you’re used to, since the system can simply revive your crew after the event. But, if a stray missile takes out the system mid-clone, you’ll find death can still be quite permanent. And you probably shouldn’t let your crew ponder too long on the fate of their previous iterations.

Mind control allows for enemies to naturally be converted to your side, while backup batteries toss in some extra power for your ship. There’ll also be a brand new alien race to deal with, that go by the name of the Lanius.

PC, Linux and Mac FTL players who own the game already get the expansion for free, while iPad owners can purchase the original and add-on separately later this year.