Home Gaming Gamescom 2015 – Cuphead killed me with carrots, and I loved it

Microsoft really loves giving a platform to hundreds of independent developers through their (now) far less restrictive ID@Xbox program. At E3 some of the biggest names in the most innovative spheres of the industry were given their chance to share weird and wonderful creations they’ve concocted – one of which happened to be the bullet hell inspired, Mickey Mouse lookalike, Cuphead. Although we never got to play it at E3, Cuphead was out first stop after Microsoft’s Press Conference yesterday – and what a choice it ended up being.

If the name Cuphead doesn’t immediately ring some bells, here’s a quick visualisation. Think all of those classic, bullet hell shooters you played way back when, combined with the even more classic visuals of early Disney cartoons. Cuphead mashes these two genres together effortlessly – creating a unique looking game that delivers a far deeper experience than the aesthetic suggests. In other words, it’s incredibly challenging – and I was pretty terrible at it. 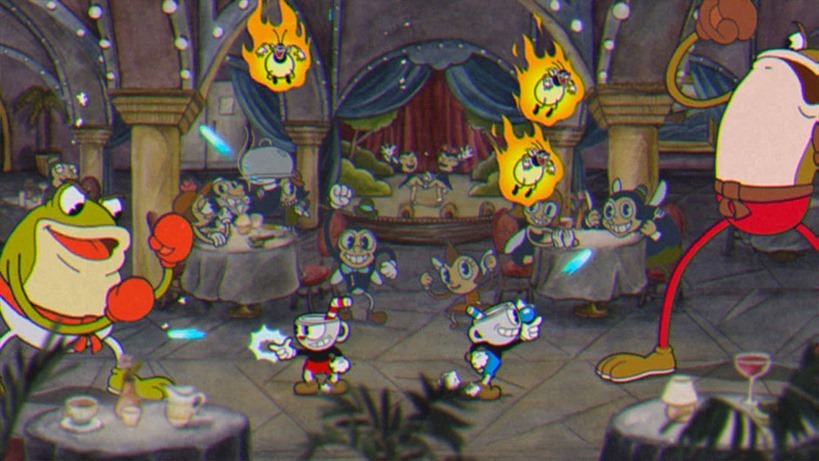 Sitting down with Matty to play a little bit of co-op after watching a few other pairs suffer under the games merciless difficulty, I was pretty intimidated. That escalated even more after the short, text-based tutorial. Other than gunning and jumping, Cuphead offers you some tools to avoid dangerous enemy attacks. Pink-coloured projectiles can be evaded with a finely timed jump – negating damage while also building up a special attack meter. Combine that with mid-air dashes, some dextrally demanding movement and button combinations spiders would have trouble with, and you’ve got a nostalgia kicking shooter that was as brutal as it was captivating.

As you can see in the 10 minutes of so below, we had a lot of fun. Or, at least Matty did after I had died.

What dying did give me the chance to do, however, was appreciate the amount of detail that Cuphead has in animations and knee twitching music. Visually there simply isn’t a game like it –calling back to classic cartoons of old with a flickering film filter and washed out colours. Enemies are also gorgeously animated, bringing things like a mesmerising carrot and truly terrifying pirate to life. The audio is sublime too – with a jazzy track acting as a prelude to more stage specific music that simply didn’t allow the grin on my face to disappear. It’s captivating, and one of Cuphead’s greatest strengths.

Although, the demo didn’t really give us a sense of how the game would be structured. A small hub world connected small boss battles of varying difficulty, but it was unclear whether or not this was just for showcase purposes. The platforming from trailers wasn’t to be found, suggest that this was the case, but right now I can’t exactly tell for sure.

What I can say though is that I really, really just want to play more, and I absolutely cannot wait for Cuphead to shine in all its glory on Xbox One and PC.