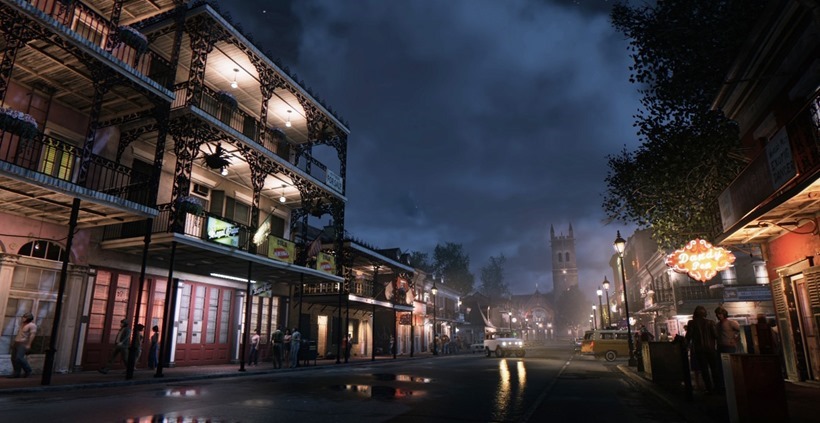 Sitting on a crimson leather couch in a 60’s styled room with dim lighting and vintage upholstery, I witnessed the reveal of Hanger 13’s first game under their new parent publisher, 2K. Mafia III had been revealed earlier in the week with a powerful cinematic trailer – suggesting themes of belonging, racial divides and the ideals of what it is to have a family. The good news is that these threads travel deep into the interwoven webs that make up Mafia III’s narrative. The better news is that it’s done extraordinarily well.

Mafia III follows Lincoln Clay – a half white, half black American who has struggled to find his place in society since being orphaned at a young age. Shifting from home to home, Lincoln eventually found himself in service of his country. Shipping out to Vietnam – the most gruelling war for American soldiers – Lincoln finally knew what it meant to have a glimpse of family. A glimpse that was suddenly lost once the war was over. But his new-found military training bought his way into a new one. Lincoln become part of the Black Mob, and although committing terrible crimes, he was home. He finally had somewhere he belonged. Until the Italian Mafia took it all away again.

As the sole survivor of a bloody gang-related hit, you play as a damaged, angry Lincoln. In the lengthy hands-off gameplay demo I saw behind closed doors at Gamescom, that point was made abundantly clear. As you roam around a beautifully realised New Orleans setting (a bit more on that later), Lincoln was hunting for new opportunities to take the Italian mob down piece by piece. If you’ve played Mafia before (or, by extension, the not as great Godfather adaptions), you’ll already know how this works. Small time players snitch on their higher ups, and eventually you’re just picking off the hierarchy – one lieutenant at a time.

In the demo specifically, Lincoln confronted a particularly high-ranking player in one of the mob’s many drug-friendly districts. After a bit of sneaking around in the graveyard (complimented with some nice cover mechanics and stealth kills), Lincoln lets loose and lays any suited and booted gangster to waste – before kidnapping his intended target. Interrogations, as it was explained, can be executed in various ways – with Lincoln here opting to drive dangerously for a little to loosen those Italian lips. Not wanting any evidence of his meddling, Lincoln murders the mobster in cold blood after getting the information he needs, tossing his lifeless body out the vehicle without even slowing down. 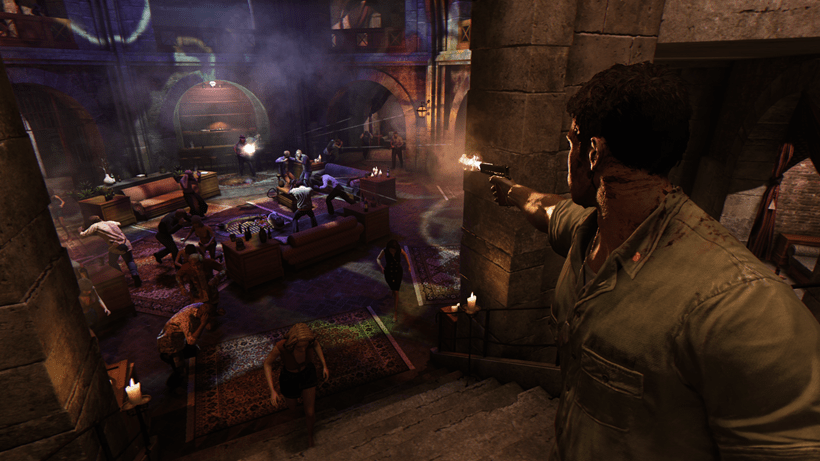 If that sounds gratuitous, that’s because it is. Mafia III seems to be a bloody, brutal affair – with Lincoln combining his military training with his overwhelming anger for some truly gory combat. Finishers, in particular, never shy away from the violence, with Lincoln shoving shotguns up against enemy’s shins, stomachs and more before firing away mercilessly. He’s also really creative with a knife, using a little bit of stealth in a Jazz Bar Racket to make his way quietly to the mobster in charge. Once there, it was back to an all out shootout again, with the cover mechanics of the previous two games being put to great use with some destructible environments and exhilarating gunplay.

With the racket now without any Italian influence, Lincoln was free to add it to his own growing network of mob networks. To get to the head of the snake, Lincoln has to wrestle control of the city away from him first – utilising the help of some of his own lieutenants to get the job done. These supporting characters, which were seen in the cinematic trailer too, aid Lincoln with police brides, resources and more as the network grows. More rackets bring in more money, and I suspect different illegal establishments will reward you with all sorts of weapons and goods that help you take down more heavily-guarded Italian outposts. 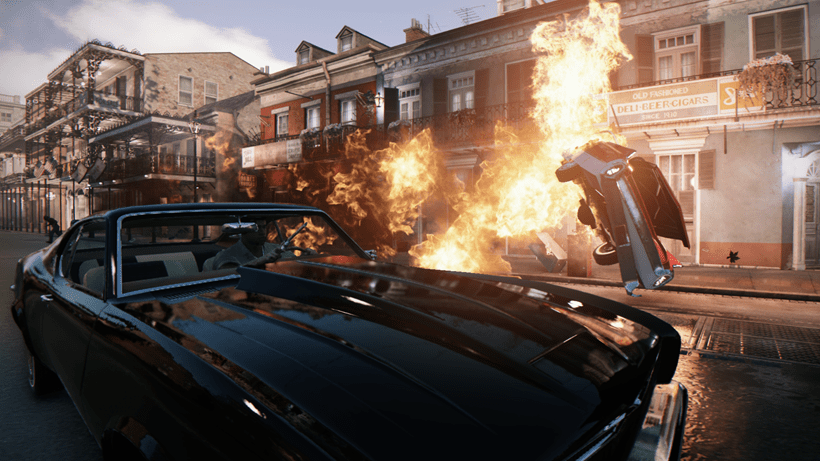 It’s familiar, but it’s the setting that really sets Mafia III apart from the gangster game you may have already played. As the demo opened, Lincoln is seen walking down a populated street in New Orleans, 1969. This was at a time where racial divides still ran deep across the country, and it’s a theme that Mafia III is openly exploring. Lincoln’s absence of belonging stretches far beyond his orphaning at a young age. Being a black citizen meant that you were treated differently, and that’s not too subtly explored here. Walking along the sidewalk, and elderly white lady jumped back when turning to Lincoln, followed by some racist slurs thrown at the protagonist for nothing more than the colour of his skin.

A little later Lincoln came across a black couple being accosted by two policeman. Although why the altercation is taking place is unclear, it seems rather reminiscent of the racial issues America is enduring now with their own police force. Lincoln has the choice to intervene in dynamic situations like this – which plays on the player’s sense of racial morality and the will to make their own mission easier without the unwanted police attention. 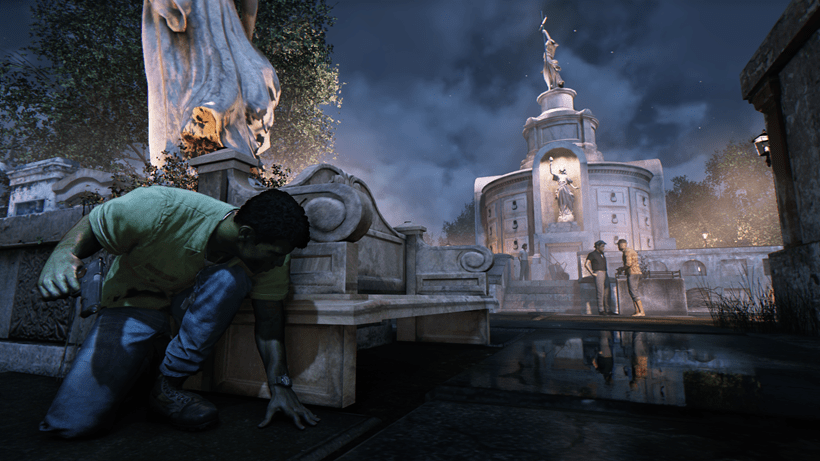 Ultimately, this Mafia III demo wouldn’t be quite as impactful without this setting that Hanger 13 has created. And its not just an exposition into the racial issues at the time either. At some points, Mafia III celebrates some of the best cultural swings this time period had to offer. Music, as the best example, played a massive role in immersing me within the games city – with the closing segment of the demo being a particular standout.

Lincoln is caught up in some impressive vehicular combat, racing away from the racket he just brought down. Among firing at pursuing enemies, Lincoln was able to sideswipe them off the road entirely with the cars looking as though they have a lot of weight behind them. The chase is frantic, eventually distilling into a mid-street shootout that was as chaotic as it was beautiful. But none of it would’ve been as exhilarating if The Rolling Stone’s “Paint it Black” wasn’t blearing in the background – a fitting backdrop for the entire scene that slots right into the game’s time period as well. And it’s that sort of attention to detail that has made me so damn excited to see more of this surprisingly standout game at Gamescom. Mafia III is boldly exploring themes in a space which has often forgetten them, while also finding a way to make the setting a backdrop to a classic revenge tale. It’s powerful, brutal and utterly gorgeous – and just one of the reasons why I’m now more excited for 2016.