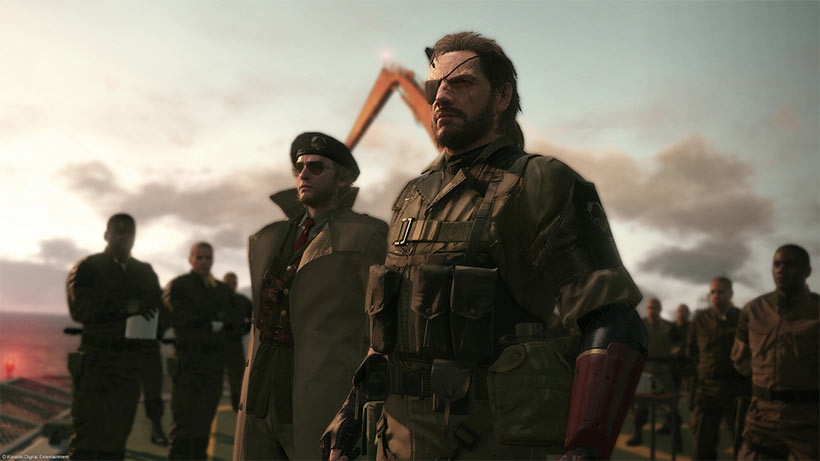 Metal Gear Solid V: The Phantom Pain is one of my most anticipated games of the year for many reasons. Hideo Kojima’s final entry into the renowned franchise is a massive evolution for the series, with vast, open-world gameplay allowing you to be the Snake you’ve always wanted to be. A fact that couldn’t be emphasised more with another take on the extensive E3 demo.

I got to see the same demo you all saw shortly after E3 on the show floor, and the exact same playthrough was looped endlessly throughout the show. In it, Snake makes good use of both Diamond Dog and the not so inconspicuous Walker Robot to achieve a relatively sneaky playthrough. There are, of course, many other ways the mission could go.

You could choose to take the scantily-clad sniper, Quiet, with you instead. As seen in the first cut of gameplay above, she’s able to simultaneously take out targets from a distance with you, as well as fire on your thrown smoke and sleep grenades (which I’ll be using 24/7 now). The escape still ends up in a mess of a fire fight though, with both Snake and her taking cover underneath an extraction chopper before making it out by the skin of their teeth. A real “Metal Gear can be a shooter too” moment.

But just because Metal Gear Solid has always been about sticking to the shadows and attacking lone targets at a time doesn’t mean the same rules apply for the Phantom Pain. You could just as easily kit out Snake with some beefy armour, some heavy machine guns and go all Rambo on an enemy base in order to get the job done. If that’s how you want to play, Metal Gear Solid V will not only allow it, but encourage it.

And I think that’s going to be the beauty of Kojima’s final call on the Metal Gear Solid stage. Never before has a game in the franchise been so much about how you want to play it, and it could very well help it become a major Game of the Year contender on September 1st.