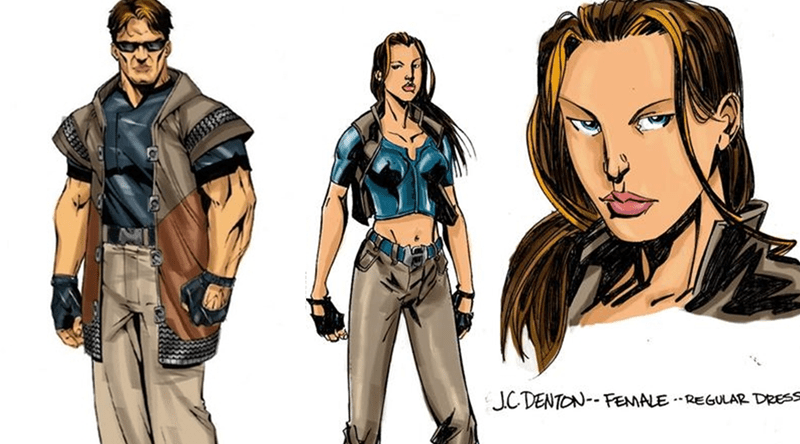 Way back before Deus Ex: Human Revolution was even an idea, there were plans in place for a third core Deus Ex game, that would have followed on from the events of Deus Ex 2: Invisible War. The game was never made however, but at least it lives on in one form or another.

Former games journalist Joe Martin at VideoBrains created a presentation for the game, which was being worked on at ION Storm back in the day. Here’s an image showing off some of the script and design documents for the game. Click to embiggen:

Set before Invisible War, Deus Ex 3 would have tripped the nanotech fantastic with a story that hopped between past and present. “The first is about an augmented Black Ops soldier who goes AWOL upon discovering he’s been used for dodgy dealings. His handlers find him and threaten him with either court martial or his wife’s execution if he doesn’t do one final job. What’s interesting is that the missions would have fluctuated between flashbacks and new stories,” says Martin.

What’s even more interesting, is that the game had quite a few similarities to Bioshock, thanks to the presence of Ken Levine on the project:

The second story begins immediately after the ending for Deus Ex in which you destroy all global communications. In this story you’d investigate the collapse and try to save your sister from a cult which arises in the chaos.

This is oddly similar to one of the original plots for BioShock, which also had you saving a woman from a cult. Again, BioShock’s Ken Levine worked with the Deus Ex team before and, while he wasn’t involved with Deus Ex 3, these ideas were obviously on other minds too.

Give the rest of the presentation a read. It’s very much worth it, if you happen to be a fan of the franchise and what could have been –  as you’ll see how several design ideas eventually went on to influence games such as he aforementioned Bioshock and Blacksite: Area 51. Still, even though that game was canned, we did get Deus Ex: Human Revolution. A superb but rough gem, it’s getting a follow-up sequel soon, something that I most definitely did ask for.