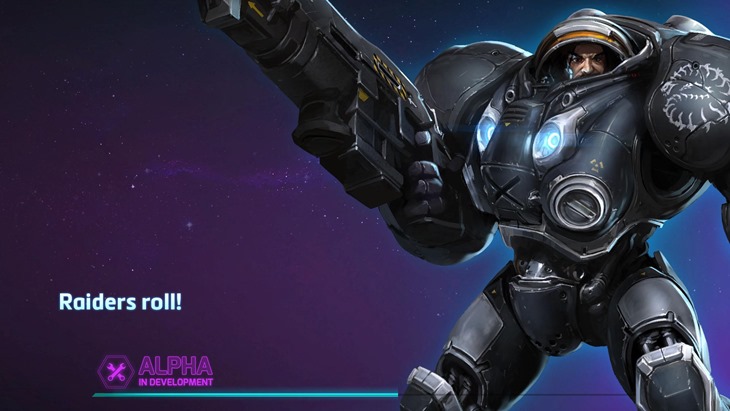 Did you know that the first MOBA wasn’t actually the DotA mod for Warcraft 3? It was called Aeon of Strife, a mod for the original StarCraft. Blizzard were indirectly part of the creation of an entire genre, simply because they gave gamers some tools to play with. Now, many years later, after years of renames, redesigns, as well as a certain dispute with Valve over the name Dota, we finally have Heroes of the Storm; Blizzards own take on the MOBA genre.

Blizzard can try and shy away from calling their game a MOBA as much as they want, but deep down, it still is. The core gameplay is there. There are two teams of five heroes, all with the goal of pushing down several lanes to destroy the enemies primary building. The similarity tends to end there, as there are loads of new ideas being explored. Remember, the game is still in a Technical Alpha phase, so there is the chance that anything you read here may change at some point during development. 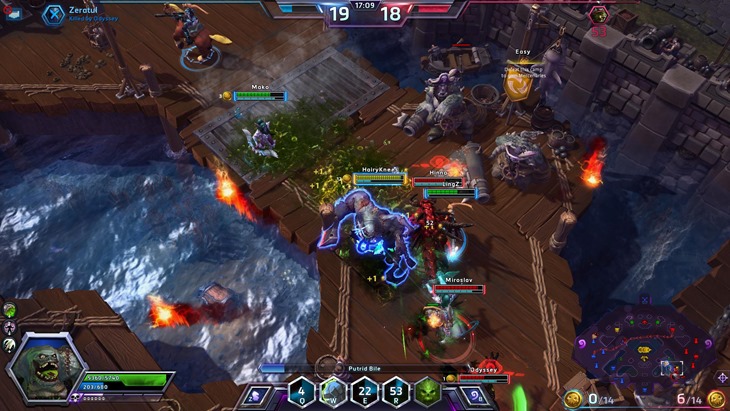 The first most noticeable differences are the absence of gold, an item shop, and independent experience. As a hardcore MOBA gamer, it really was disconcerting at first. This changes the gameplay somewhat, as there is no longer an emphasis on trying to “outfarm” the enemy team.

Instead, traditional item shopping is replaced with customisable hero abilities, and independent experience is replaced with a bar that represents the level of the entire team. The latter means that a player no longer needs to worry about becoming under levelled or useless as the game progresses, as the experience is global.

The absence of gold also makes life a little easier, especially for supports who are generally shunned and starved of gold in the typical MOBA setup. All a player has to do to net experience for the team is be present in the lane. There is no last hitting required whatsoever. Now, at first I sat and scratched my head, wondering “what’s the point?” There really is no room for it though, as the game is about gaining momentum and pushing down the enemies lanes. Newbies can rejoice, there is now nothing wrong with mindlessly right clicking down a lane! 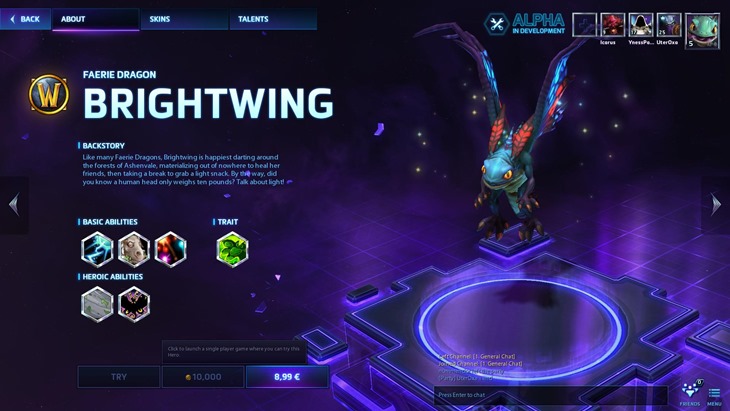 The heroes themselves are incredibly fun to play, and the game already has many familiar favourites. Thinking on all the lore packed into WarCraft, StarCraft, and Diablo, I really don’t see them running out of characters to implement anytime soon.  It’s quite something to see the likes of Diablo squaring off against Kerrigan, or Raynor taking on Valla, the Demon Hunter.

Heroes are classified according to their primary role; Warrior, Assassin, Specialist, and Support. They each have access to their three abilities right from the beginning of the game, as well as a passive or sub-ability of sorts. It changes early skirmishes somewhat, as fast paced battles can take place immediately, and they very often do.

As mentioned already, these skills are customisable to a certain extent. For example, Stitches is the abomination who can hook enemy heroes. One of his possible skill builds includes making the hook longer, or gives it the ability to hook two targets instead of one. Each hero also has the choice of one of two ultimate abilities. Stitches can choose to either emit bile that damages heroes in an AOE, or he can choose to gorge a single enemy, taking them out of the fight for a few seconds and doing some damage too. It does open some room for a player to decide exactly how they wish to play the hero. 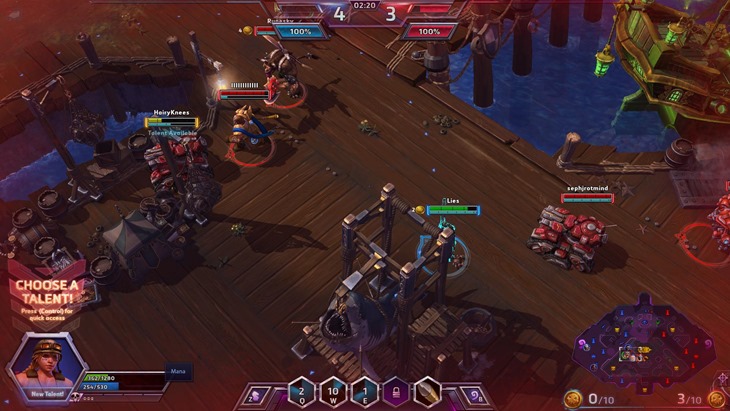 The game already has several maps to cause mayhem on. All are won by destroying the enemy core, but it’s their secondary objectives that set them apart. One for example, has mines which open up periodically throughout the game. Killing the residents of the mine yields skulls, and the more a team collects, the stronger their Grave Golem will be when it spawns.

It opens up many strategic doors. A team can decide to either push a lane with their Grave Golem, or defend the push from the enemies giant monster. Between all of this chaos, there are also mercenary camps spread throughout the map. Defeating them will sway them to your cause, meaning they will push down the nearest lane.

When a team plays together, it’s amazing and loads of fun. However, all these different options may become a recipe for disaster too, as miscommunication and skewed visions of important objectives by players may lead to some minor arguments. One player may feel that pushing is best, the other may choose to defend. One may decide to farm up mercenary camps, while the other tries to collect skulls in the mine. 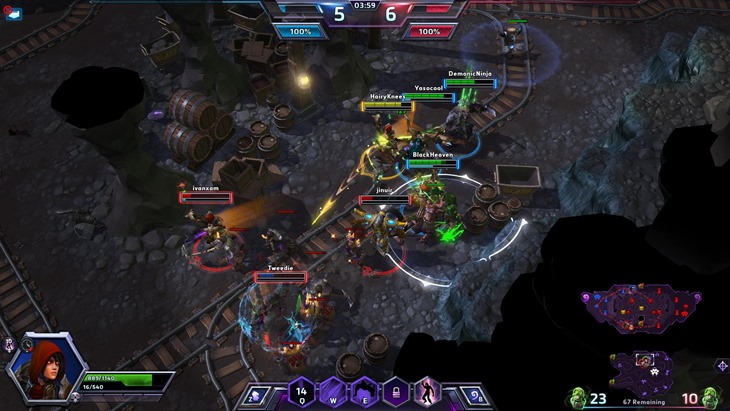 I never experienced true rage, but I can honestly see it happening in some form in some games. Blizzard might have removed some core MOBA elements to make it beginner friendly, but adding in so many different aspects might actually end up complicating things for newcomers. The overall team experience bar is honestly a great idea too, but I’ve already been part of some games where the enemy team had an advantage of two or three levels, resulting in part of my team giving up and going AFK because they felt the game was lost.

I don’t think the game will hold the attention of “hardcore” MOBA fans either, at least not in the long run. It just lacks the depth that many may desire. The thing is, it’s not meant to be a hardcore game though, it’s meant to be something that is quick and casual. My game times varied from as little as 10 minutes through to about 28 minutes, and that particular game was really drawn out. All that being said, the game is still in Alpha, so I’m sure Blizzard will find ways or make the needed changes to make the game better as time goes. 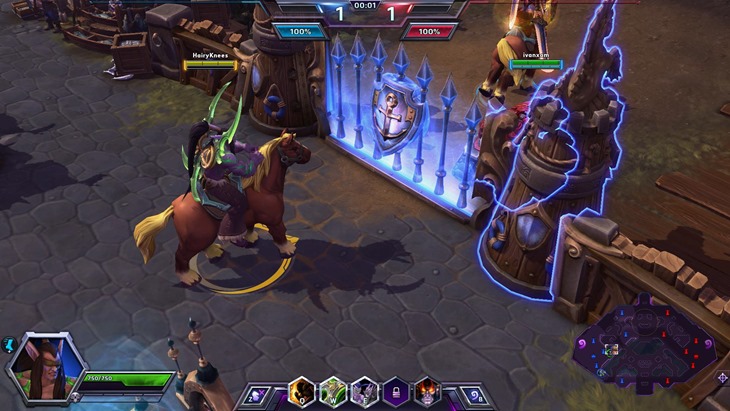 I can honestly say that I did enjoy my time with the game. Sure, I like me some Dota 2, or even League of Legends, but the way it stands at the moment, Heroes of the Storm offers a refreshing change. No stress of farming, secondary objectives to keep things going, it’s something I can really enjoy. There is so much more I could say, but I think this is sufficient for now. I look forward to playing and writing more on the game as it progresses down the development cycle. There is no set release date just just yet. I will have some video content ready for you soon so you can see exactly how the game plays in the meantime.